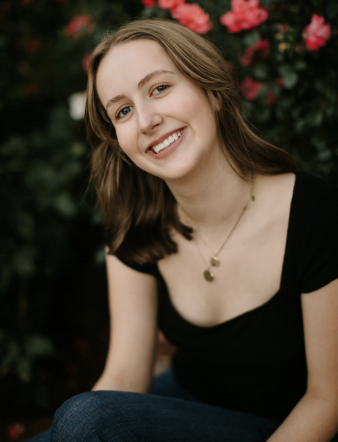 Gretchen Rudolph has served as a reporter and podcast producer for the Cardinal Times.

Senior Gretchen Rudolph, who has a passion for podcasts, has been on The Cardinal Times staff since her freshman year. She was a content editor as a freshman and sophomore, social media manager during her junior year and a reporter senior year.

“Since I was in middle school I knew that I really wanted to work in journalism or public relations,” Rudolph says, “and just getting to know other people and The Cardinal Times was the perfect place for that.”

Her favorite thing about doing podcasts is editing and producing them. Rudolph has created many episodes of her podcast, Gettin’ Flicky With It, where she discusses movies and media alongside Jack Forman.

“I really like working on podcasts because I feel like you are very free to do what you would like and you get to talk about things that interest you,” she says.

Rudolph was given many learning opportunities that she credits to Cardinal Times adviser Mary Rechner. She was able to learn more about podcasting by interviewing Crystal “Kash” Ligori, a podcaster and producer for Oregon Public Broadcasting.

Throughout her experience on The Cardinal Times, Rudolph found that one of the most important things to do was to “follow your deadlines; you have people counting on you, so just always make sure you’re on time.”

Rudolph was on Lincoln’s Constitution team her sophomore year. While she may have studied the past, she al- ways has her ear on news around the school and doesn’t shy away from pitching bold story ideas in the newsroom.

Rudolph plans to continue with journalism while attending the University of Southern California, where she will major in communications and possibly minor in marketing or the cinematic arts. Although nothing is certain yet, Rudolph sees podcasting as part of her life and possibly as a career.

“Learning about podcasting while I have been at The Cardinal Times and learning how to edit, record, host and produce is something that will really stick with me,” she says.