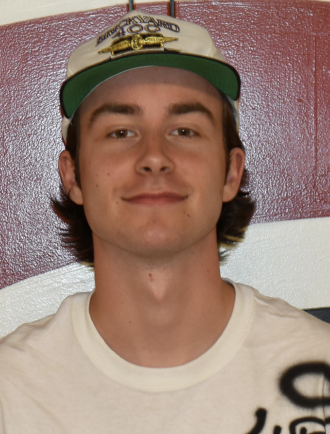 Oscar Harold has served as a reporter and Arts and Culture editor his senior year.

The Cardinal Times hasn’t always provided comprehensive coverage of the arts, music, and culture. Oscar Harold, current Arts and Culture editor, has been working to change that.

Harold started on the staff in his sophomore year because he was “put in [the class] randomly, and I had no idea what I was getting myself into. I discovered that I liked writing and I started getting more into it,” he recalled.

Being a Cardinal Times staffer has made Harold value “storytelling [and] finding things out in my life that people don’t know about and telling other people.”

Harold enjoys sparking conversations through his writing and doesn’t shy away from provocative topics.

“The most interesting things to write about are the controversial and ‘hot topic’ ones. I wrote a story about Xanax (“Movement against use of Xanax gains steam”) last year when there were a bunch of overdoses,” said Harold. This was his favorite article to write because it was “something sensitive.”

In his free time, Harold plays basketball and designs clothing for fun.

“I’ve worked for multiple signed rappers and done their merch,” said Harold. “I’ve sold a few hundred shirts in the past year.”

Harold has encouraged the Cardinal Times to open up their coverage to more culture, arts, music and fashion. While he sometimes does not display it, he is very passionate about social justice issues such as racial justice and bullying.

“I’m planning on going to DePaul university next year in Chicago, and basically my plan is to go to college for now and learn things and experiment,” he said.