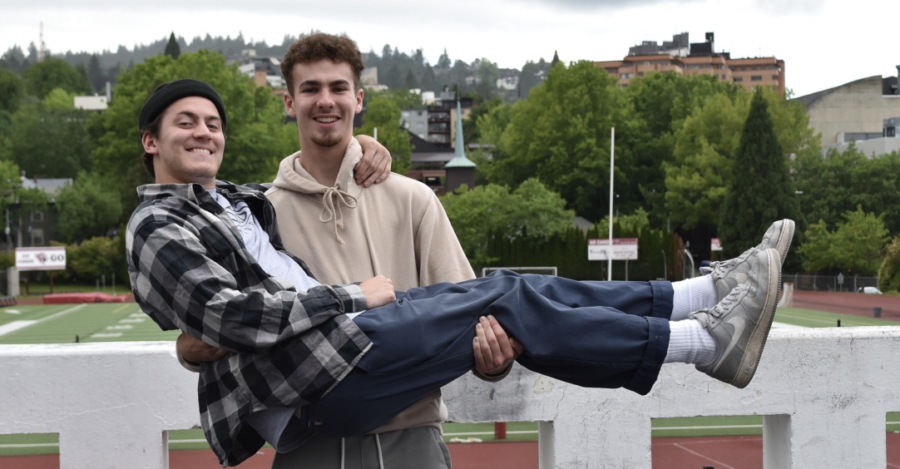 Long time reporters, Alex Paskill and Scotty Martin have been childhood friends and have worked together on the Cardinal Times publishing articles, photojournalism pieces and videos together throughout their time on the staff.

A little bit of anxiety, a little bit of peace. “Nothing else matters except what you feel in the moment.” This is how Alex Paskill feels when he flies his small aircraft. Paskill has been an aviator since his freshman year, though it’s been his lifelong dream to fly planes.

Though Paskill is well known for having many bylines in the newspaper for his photography and investigative articles his hobbies outside of the newsroom have also shaped him into the person he is today.

On top of being a four-year staff member of the Cardinal Times, Paskill is involved with Cards Cook, a student-run organization which serves food to the homeless.

“Giving back to the less fortunate has been something I’ve done throughout my whole life, and taking the initiative to start something like that in high school has been a gratifying experience.”

Outside of Lincoln, Paskill has many additional interests. He is an award-winning Greek dancer at the Folk Dance Festival, an international Greek dance and heritage competition in California. He is also a member of the Greek Orthodox Archdiocese of America.

During his time on the paper, he’s witnessed many positive changes in the publication and staff.

Paskill believes that his involvement in the Times has shaped him into the person he is today. “It’s allowed me to meet a lot of people and open my mind to a lot of parts of life I didn’t think about before the class,” he said.

Out of his four years of experience as a reporter, Paskill has done it all. Writing, photography, videography, investigative reporting and running social media, Paskill is well known for his numerous skills on the paper.

“I liked telling a story more than editing and managing people, and I enjoy discovering where a story can go,” Paskill says.

Of all the things he’s learned from his time as a staff member, Paskill’s most memorable learning experience was that he “never realized the amount of debate there could be surrounding how people would react to a story.” For example, when Paskill wrote about Lin- coln’s Constitution Team’s back and forth win against Grant High School, he faced backlash from students and coaches about the matter.

“If people are talking about your article then you know people are reading the paper, and that’s making an impact,” he adds.

Over the span of four years, things are bound to change no matter what it is. About the Cardinal Times, Paskill says “We have been trying to be a lot more conscious of diversity and reporting equally on everybody. It’s critical we only continue to do so and give everyone in the school and community a equal voice.”

Paskill will attend Purdue University next fall to major in aviation management.