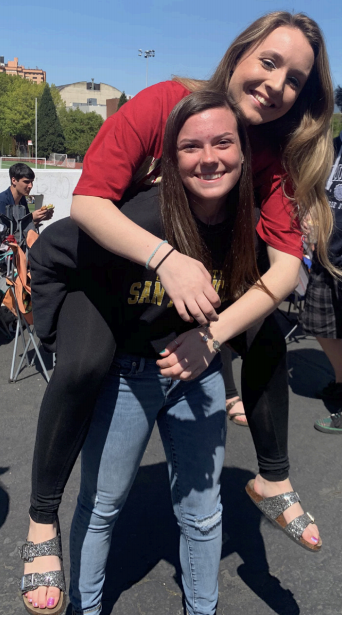 Though good friends outside of the Cardinal Times, Rosie Crawford joined the staff her senior year while Sydney Laxson has served as an editor and reporter since her freshman year.

In front of Lincoln High School, students chant and hold signs to protest for gun reform and student safety.

Sydney Laxson captured the whole scene in one picture.

Through her photographs, the Cardinal Times staff have told some of their most significant stories.

Laxson, a senior, began reporting for the Cardinal Times as a freshman, then became visuals editor in her junior year. As the visuals editor, she gathers photos for stories and updates the website.

Laxson’s main focus this year has been on the Cardinal Times’ online edition. She says that the visuals and aesthetics she has contributed to the website have increased views significantly.

Because of the Cardinal Times, Laxson has gained an appreciation for the news and has learned to look outside of her scope.

“Without the Cardinal Times, I would not have known a lot of issues. Just talking to… people who have experienced things that I can never experience has…opened my eyes and taught me more empathy,” Laxson says.

Laxson, who plays varsity soccer, plans to attend the University of San Francisco, where she will major in psy- chology with an emphasis on cognitive and neuroscience.  While she will not be pursuing journalism in college, Laxson says she may end up back in the field in the future.

“I love philosophy and ethics… [they have] definitely made me a better and more well rounded human being,” she said. “I also think more people should take these classes because they are really important in order to understand a wide variety of topics and to be more ethical in the real world.”

She advises current and future Cardinal Times staff members to “be yourself” and to choose topics that interest them.

“The pieces you create are so much better when your heart is involved,” Laxson says. “The more interested you are in a topic the more you are going to want to pursue it and write about it.”