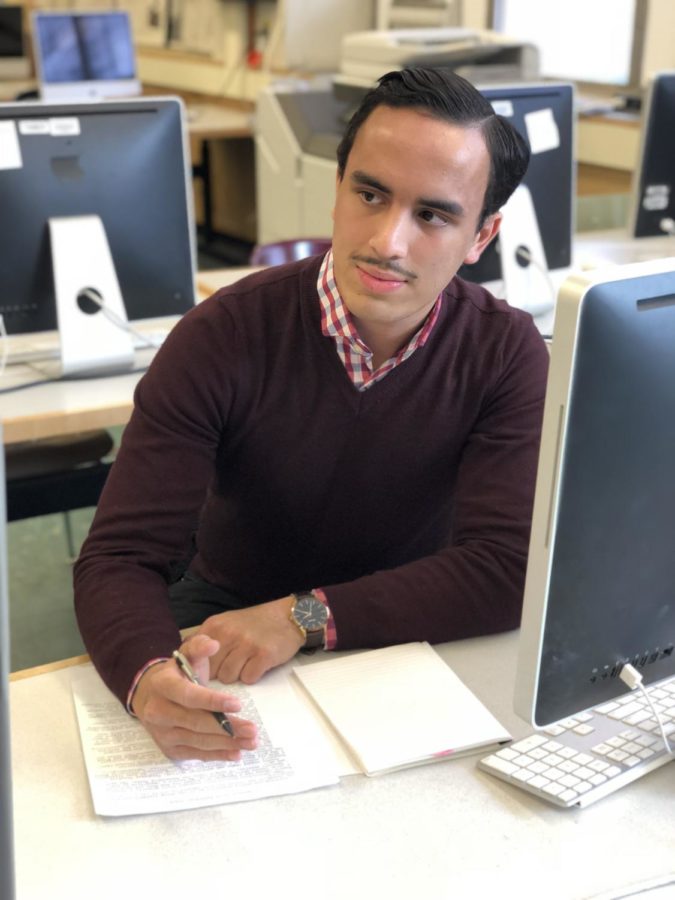 Senior Armand Yazdani was a reporter and editor for four years.

Mild mannered, well spoken and dressed to the T,  Armand Yazdani is easy to spot walking down the halls dressed in a well-pressed suit and scarf wrapped around his neck.

Yazdani’s interest in politics and desire to stay updated on the news led him to forecast for journalism his freshman year. He wanted to inform people and remind them of the importance of news.

Yazdani’s interest in writing was encouraged under his first adviser, David Bailey. With Bailey, Yazdani enjoyed learning about historical journalism. His “very traditional form of journalism” inspired Yazdani to join as a staff member the following year.

What is a man without news?”

Making an impact on people has been one of the driving forces motivating him to continue. During his sophomore year Yazdani wrote about how Muslims felt about President Trump’s campaign.

Among the staff, Yazdani has become the go-to political writer, writing analytical articles about current political issues and localizing them to the Lincoln.

“There hasn’t been much controversy in a while with my articles because I haven’t editorialized that much, I have had some analysis articles.”

One controversial instance Yazdani did face was when he wrote about the opening of the gender neutral bathroom. Yazdani faced backlash from the leaders who got the bathroom changed due to an incorrect reference to the name of the bathroom. Yazdani meant no harm in referencing it differently than with the term “gender neutral”, simply wanting to not sound repetitive in his writing. “It’s important to correct mistakes… still apologize” he says.

Yazdani hopes that in college he can take more of a political stance when he writes in the school paper.

With four different advisers over the past four years, Armand has seen many changes. From his freshman year to senior year he has seen changes in the routine and having more structure develop. He says that each year there is some “revolutionary change.” From more traditional views with Bailey to a more modern outlook with his sophomore advisor Joany Carlin.

He’s noticed that over the years the staff has grown considerably.

Outside of the newsroom Yazdani has enjoyed fencing, rowing and hanging out with friends. He will pursue a business major and continue to follow his journalism passions by writing for his school paper, at University of Oregon.

No matter what, Yazdani says “I want to reflect the truth. I don’t want to compromise the truth.”