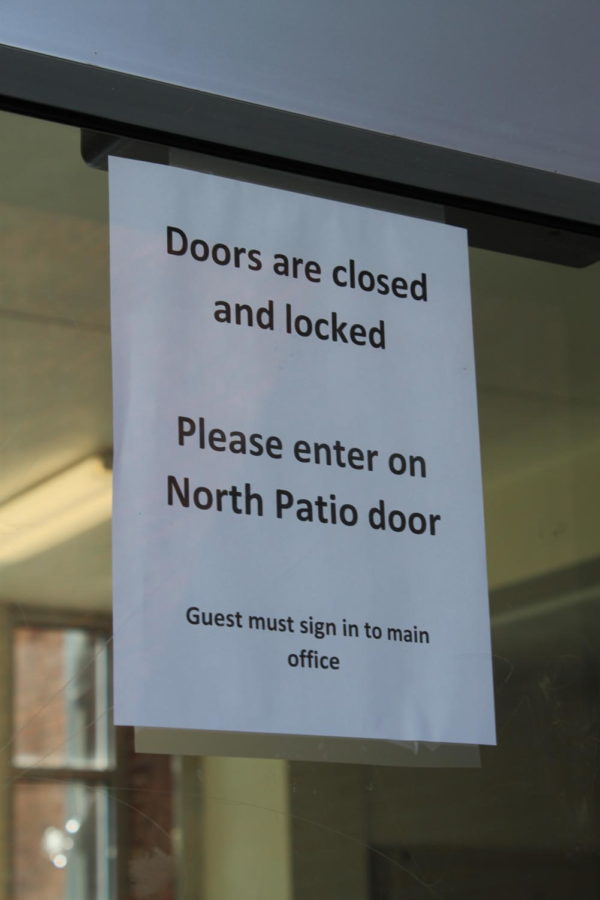 All doors around Lincoln are now locked after the saftey concerns following the Parkland, Fl shooting at Majory Stoneman Douglas High School. Signs direct students and guest to the main doors.

Despite the disagreement on the national level about gun control, many Lincoln students agree that changes need to be made, both within the school and in the legislature.

“I definitely think something needs to be changed. We shouldn’t have to be in this situation where we’re worried about someone shooting up our school,” said sophomore Liem Mackenzie.

One safety precaution Lincoln has recently implemented is locking all of the doors after starts in the morning.

“I think that locking the doors is a good idea,” said sophomore Michael Riley.

Though Riley’s family owns guns, “we use them for skeet shooting, but it’s more of a family bonding thing [more] than anything.” He “also think[s] that there should for sure be harsher regulations on buying guns,” he said.

When examining the national conversation of gun control, the National Rifle Association is inseparable from the topic.

The NRA is a tax exempt organization used as a pool of money and resources to organize activities, lobby Congress and act in the interest of gun owners across America. More than a quarter of America’s population owns guns, according to the General Social Survey by Gallop in 2013.

The NRA’s mission statement is, “To protect and defend the Constitution of the United States, especially with reference to the inalienable right of the individual American citizen guaranteed by such Constitution to acquire, possess, collect, exhibit, transport, carry, transfer ownership of, and enjoy the right to use arms,” according to its website.

As students, we should be motivated to make Lincoln as safe as possible.”

The go-to rebuttal for gun rights defenders is the Second Amendment of the U.S. Constitution. Adopted in 1791, the Second Amendment reads, “a well regulated militia being necessary to the security of a free state, the right of the people to keep and bear arms shall not be infringed.”

There are often debates about whether the Second Amendment is still relevant in modern times. One thing’s for sure: America’s gun culture runs deep.

Many students feel helpless when faced with an issue so large and complex, but others have already started to take action.

At Lincoln, a student-led club named The Never Again Club has already started planning walkouts and leading discussions among students on gun control.

“As students, we should be motivated to make Lincoln as safe as possible. We should understand what to do in the case of a school shooting. We should also be actively fighting for more Oregon gun regulations because they are not keeping us safe,” says junior Laney Hergenhan.

The Oregon Legislature has already started to make changes to gun laws after the hellfire of marches and protests led by primarily students that have consumed many of our nation’s largest cities. According to OPB, on March 5, Oregon Governor Kate Brown signed a bill prohibiting domestic abusers and anyone with a restraining order from purchasing a weapon.

Although it’s a small change, it’s definitely a step in the right direction towards making our schools and communities safer.