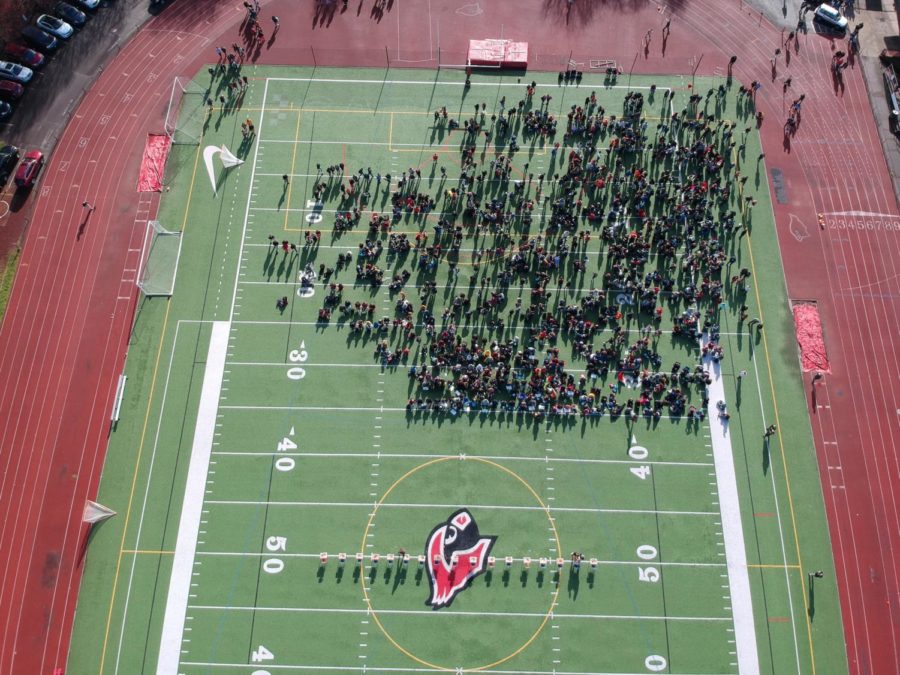 Students gather on the field to pay respect for the 17 students who lost their lives in Parkland, Florida on March 14.

President Donald Trump’s proposal to arm teachers has been met by both  criticism and approval. His backers state that armed teachers can more effectively protect students especially if trained. Critics of the plan argue that teachers are educators who are unobligated to risk their lives or to kill.

Discussion on arming teachers has pervaded Lincoln following the president’s remarks. Teachers and other staff have also considered the efficacy of his idea.

The Cardinal Times investigates how the school’s personnel regard the proposal to arm teachers.

Political Economics teacher David Bailey says that he “doesn’t have a problem with teachers being armed.”

“As a general position, I would not have a problem with teachers properly trained to be designated as weapon carriers in the building,” Bailey says.

He would prefer to remain unarmed, because he “would not care to go to the training.”

Bailey adds that he “would not take away [the opportunity to bear arms]  from any other staff members who would be willing to go through training.”

As a general position, I would not have a problem with teachers properly trained to be designated as weapon carriers in the building.”

“When I say staff members, I’m not just talking teachers, but campus monitors and people we could bring in and people from outside,” he says.

However, the history teacher believes that “it would be absurd” if teachers were to publicly display their guns, such as in holsters.

“Any adults in school, who would be trained and authorized to carry a concealed weapon should be kept secret to the larger staff. I don’t want to know who’s carrying it,” Bailey says.

He questions whether “any of this is truly necessary, given the rarity of school shootings” in spite of “how horrible they are.”

Bailey adds that additional armed security to Lincoln would not be unusual.

He noted that an armed policeman has been assigned to Lincoln for several years, and he’s y never  heard anyone complain. He says that sometimes two or three police officers have been present at football and basketball games every week in the fall and winter.

Attendees at the State boys’ basketball tournament last week, Bailey recalls, were checked for metal objects as they passed  armed security before entering the audience.

“Members of Congress have very tight security. I don’t think people at the Oscars felt unsafe because there were armed guards,” he notes.

Bailey states that armed guards accompanied representatives and senators who spoke at the DC student protest on March 14.

“Indeed, The Capitol is an armed camp,” he says.

Principal Peyton Chapman opposes the possession of guns in general.

Chapman is “worried about having all these guns in schools.”

“I wouldn’t want to increase the risk of accidental shootings [or increase] the risk of teachers with self-harm,” Chapman says.

She alludes to Dalton High School teacher Randall Davidson, 53, who barricaded himself in an empty classroom before firing his pistol. No one was hurt.

She notes that teachers already have too much on their plates.

“Just trying to be masters of their content, and build relationships with their [students] is hard enough.”

Chapman believes that arming teachers will breach the peace at Lincoln.

“Everything we preach and teach about schools is [about] creating a safe and inclusive and warm and inviting environment. Gun toting teachers is the opposite of that,” she explains.

“The whole concept [of arming teachers] is surreal.” Chapman adds, “there would be more guns fired, more bullets harming people.”

In sum, the principal fears that the armament of teachers “would be mayhem.”

“How does a trusting, welcoming school build a relationship with a student, with a gun?” she inquires.

Ethics and English teacher Gabrielle Buvinger-Wild argues that firearms should be “out of the schools.”

“I don’t think that harming children is in the job description of being a teacher,” she clarifies.

Buvinger-Wild adds that “owning a gun statistically increases one’s risk of being shot.”

She clarifies that it “is not uncommon for people to be shot with guns that they own for reasons of self defense.”

She posits that weapon carriers “might feel emboldened to enter dangerous situations” which they would avoid unarmed.

She explains that policemen may struggle to search for a gunman with teachers armed.

[Law enforcement] is looking for a person to subdue, and if you have 30 people with a gun, it would make their job a lot more difficult.”

“[Law enforcement] is looking for a person to subdue, and if you have 30 people with a gun, it would make their job a lot more difficult,” the teacher says.

Buvinger-Wild believes teachers would most likely be equipped with sidearms, if they were to be armed, which would not be “an adequate force” against the school shooter’s weapons.

She imagines that many other problems could arise if teachers were to be armed.

“I can very easily see a teacher targeting a student of color [during a school shooting] because of implicit bias,” the teacher states.

She also worries that if a teacher were to fire at an armed student, “they could miss and hit another student.”

“I think [arming teachers] is probably the stupidest idea I ever heard of,” she says.

When asked if teachers would react similarly to Peterson, Elliott responded in the affirmative.

“Yeah, because we would have been asked to shoot someone we know. Not random people,” she says.

Elliott bears one question when it comes to trained-armed teachers.

“You train these ninja warrior teachers, but [where do they put guns]? Is it in a drawer? Is it in a safe?” she asks.

The English citizen is unable to fathom why individuals buy Armalite guns such as the AR-15 in the United States.

Elliott fears that arming teachers would elicit a bleak outcome.

The very idea of firing at a student jars her.

“How the hell are you going to say ‘shoot someone else’s kid?’” she asks.