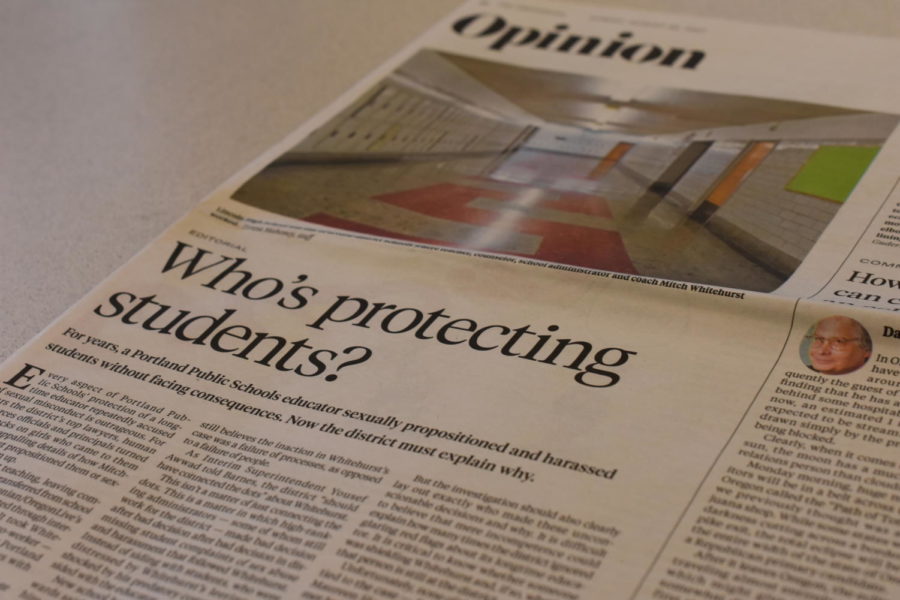 An Oregonian editorial on Aug. 20, 2017 featured a photo of Lincoln and questioned whether PPS is doing enough to protect its students from teachers who commit sexual misconduct.

On the second-to-last day of the 2008-09 school year, the mother of Ethan Zerpa, a freshman at the time, marched into Principal Peyton Chapman’s office with a folder full of staggering evidence.

It was the culmination of months of inappropriate behavior Zerpa faced at the hands of Christine Jenkins, an English teacher, according to a TSPC investigation obtained through a public records request.

Zerpa was not a student of Jenkins, but worked with her as president of the freshman class cabinet. They planned events and, as the year progressed, Jenkins, then 44, began to foster a closer relationship with Zerpa.

In person (occasionally alone with Zerpa) and on Facebook instant messaging, Jenkins told the freshman private facts about herself, such as her relationship with a Lincoln staff member and times she drank and smoked, according to the TSPC.

“The lines became blurred,” Zerpa said. “It wasn’t something I realized while it was going on, not until a few weeks before the end of the school year when things became more aggressive on her part.”

The lines became blurred. It wasn’t something I realized was going on.”

The “relationship” became more physical, with frequent hugs and a kiss on the cheek, according to the commission’s investigative findings.

“Even then I was finding reasons to justify why it was okay,” he said. “‘It was just Ms. Jenkins, everyone loves her,’ I was thinking.”

Jenkins took Zerpa and another student into the maintenance tunnels below Lincoln, and she wrote an obscenity about Principal Chapman on the walls, according to the TSPC. Jenkins filmed the trip into the tunnels, the investigation found, and, along with the online messages, this was a part of the evidence that Zerpa and his mother brought to Chapman’s attention.

Zerpa said he became increasingly uncomfortable with the teacher’s behavior, and he alerted his parents, who came forward.

Though not at liberty to discuss individual cases, Chapman described to the Cardinal Times what happens behind the scenes when the school receives any type of complaint – whether it be as serious as Zerpa’s, or more mundane.

“We would start the investigation by alerting [the district]. We start talking to the victim or the victim’s parents immediately.”

To give the accused due process, the investigation must involve the teacher against whom the accusation is made. “Whether that’s an instructional complaint or abuse or harassment complaint, the teacher has a right to a union representative, and must receive a chance to tell their side of the story,” Chapman said.

“We work with [the district] to decide if there’s need to put someone on paid leave while the investigation happens. If there is going to be opportunity for continued harm to students, [the teacher might be placed on leave].”

The Portland Association of Teachers is heavily involved in the process.

Maggie Raczek, a biology teacher and Lincoln teachers’ union representative, said that the union has an interest in both keeping students safe and ensuring accused teachers have due process.

“If you are an active member of the union, you are provided with an attorney to help you through the process. It’s all about due process rights, not guilt or innocence,” she said.

Jenkins declined to comment to the Cardinal Times, citing a non-disclosure agreement she signed with the district.

According to the TSPC investigation, Jenkins denied sharing information about her personal life, kissing Zerpa and sending the student a love poem. She admitted to the trip into the tunnels and that her chat messages with Zerpa “crossed the boundary.”

Zerpa was satisfied with the investigation process in his case – the speed, thoroughness and supportiveness.

“Overall, the Lincoln community, especially administrators, were there for me,” he said. “Ms. Chapman had a lot of things on her schedule for the day, but as soon as she opened up the folder [with the evidence], she cleared the rest of her schedule.”

The next day, when Jenkins arrived at work, she was met by police detectives, according to Zerpa.

Jenkins had already planned to leave Lincoln that summer for Cleveland High School, but was fired by the district, according to the TSPC. She eventually also lost her teaching license after a follow-up investigation by the TSPC, which licenses teachers.

Though Zerpa said he was satisfied with the investigation process, he knows it never would have even been initiated if not for his mother.

“If it hadn’t been for my mom being a mom, I think I would have pretended it didn’t happen and repressed it in my memory,” he said. “I wanted to sit back and let it disappear. That would have let [Jenkins] just go do the same thing with another kid.”

In 2012, according to a TSPC investigation, at least three female students – from freshmen to seniors – came forward about Sato. Two said they were spoken to inappropriately and one said she was kissed by the teacher, who was 44 at the time.

Sato reportedly also asked girls for their phone numbers and friended them on Facebook so that he could meet them on weekends, the TSPC investigator found.

Another 12 students confirmed these accounts to Principal Chapman, the TSPC investigation report said.

Sato resigned in 2013 at the conclusion of the school’s investigation. TSPC later revoked his teaching license.

When contacted by the Cardinal Times, Sato declined to comment, citing confidentiality agreements with the district.

In an interview with TSPC investigators, Sato “admitted that in hindsight he had boundary issues,” according to the report, but denied “any romantic or sexual intentions toward any student ever.”

Both the Sato and Jenkins cases raise questions about what Lincoln does to encourage early reporting of complaints. In both cases, the misconduct went unreported for weeks or months.