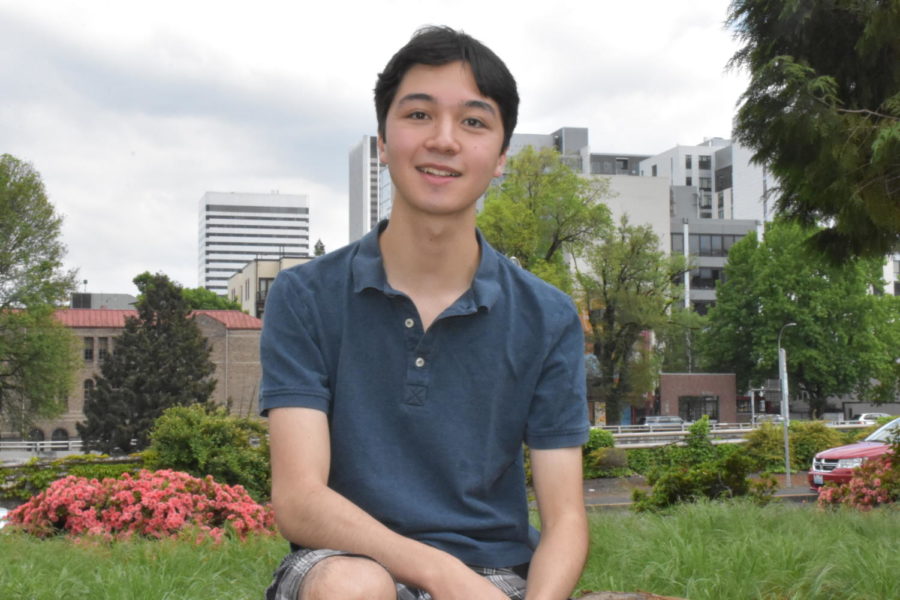 Many people know Jamie Bikales as the newspaper guy at Lincoln.

During his long run as a staff member and Editor-in-Chief of the Cardinal Times, Bikales became well known for talking about the paper to his friends, handing them out to students during lunch, and approaching anyone in the halls for a story.

Bikales joined the paper on a whim. He needed to fill an extra elective spot on his schedule.

“I had never heard of or read the Cardinal Times before, but I always liked reading newspapers, especially the sports section, as a kid so I thought it might be interesting,” he says.

According to his classmate, Armand Yazdani, who’s been writing for the paper alongside Bikales since freshman year, Bikales published numerous articles even as a freshman, due to his excellent writing skills.

He quickly moved up the leadership ladder, securing the role of Editor-in-Chief his junior year, which he held through the first semester of his senior year.

Over the course of his time on the paper, Bikales credits his four different advisers, a new one each year, as an integral part of his success.

“Even though I’ve had a different adviser each year, each one has taught me new and different things and I’ve improved,” Bikales says.

The proudest thing for me has been upping the content to make it a respected watchdog over the Lincoln administration and even all of PPS. I think people hold us as a real legitimate news source now.”

For his freshman year he had teacher David Bailey, who he says “with his incredible wealth of knowledge and experience with the Cardinal Times, I learned a lot of the basics I needed.”

During his sophomore year, the first year he was an official staff member of the paper, Bikales was working with seven other students and adviser Joany Carlin, who he still keeps in touch with today. Working with her and John Killen, the adviser his junior year, allowed Bikales to learn “how to run a newsroom like a professional one.”

While Bikales says the Cardinal Times did at one point have “pretty low reputation” and “it barely came out, content wasn’t great, people didn’t know about it,” he still felt that with a smaller staff it allowed him to grow as a writer and develop more leadership skills.

“I had a huge opportunity to write a lot and take some leadership, which I really enjoyed and made me want to stay on,” Bikales says.

The weaknesses Bikales saw in the paper a few years ago, were the aspects of the paper he worked to improve during his time as the editor.

Bikales notes that “the proudest thing for [him] has been upping the content to make it a respected watchdog over the Lincoln administration and even all of PPS,” adding “I think people hold us as a real legitimate news source now.”

Bikales, along with the other staff, have worked to improve the Cardinal Times brand. “I am also very proud of growing the social media presence and pivoting towards more digital content to better connect with readers,” he says.

While many saw Bikales has having great leadership of the paper, he still faced numerous struggles along the way.

“I didn’t really have any leadership experience of anything as big as the Cardinal Times, so I was kind of learning on the fly,” he says. However, with the guidance of his mentors, such as Killen and this year’s newspaper adviser, Mary Rechner, he has learned the ropes of managing the newsroom efficiently.

Rechner has also helped Bikales hone skills where he didn’t have as much experience. “She taught me skills on how to run a successful organization including finances and professional development,” says Bikales.

He also learned “a lot about how to manage people and make sure they met deadlines.” He adds, “I learned that I sometimes put in too much work for other people, if they didn’t get something done, then I would just do it, which is not a good leadership technique.”

Bikales has an extensive list of bylines, including four years of stories about the Lincoln rebuild, sports updates, the fire that burned down a portable the summer of 2015, editorials about fire alarms and pedestrian safety and much more.

However, his most notable piece was published this April and called “Abused and Afraid.” After working for six months investigating the process of students reporting sexual misconduct by teachers, and looking into past Lincoln cases, Bikales produced the biggest article of his high school career.

While many staff know Bikales to have spent late nights writing, editing and designing for the paper, his life wasn’t just being the “newspaper guy.” Bikales has played tennis all four years at Lincoln, participated in the Constitution Team his sophomore year, was a member of the Speech and Debate team and was the Youth Director of the Northwest District Association, a neighborhood association.

While Bikales will head off to Harvard University in the fall, hoping to major in political science while writing for the school’s paper, The Harvard Crimson, he notes that there are parts of the Cardinal Times he will hold close forever.

While Bikales hopes to see “that the work that [he] put in will make a positive impact on the school, hopefully for many years to come,” he adds that “I have also gained a lot from the Cardinal Times. I know that the knowledge and skills I’ve picked up, as well as the relationships I’ve made with my fellow staff members, are going to stay with me forever.”