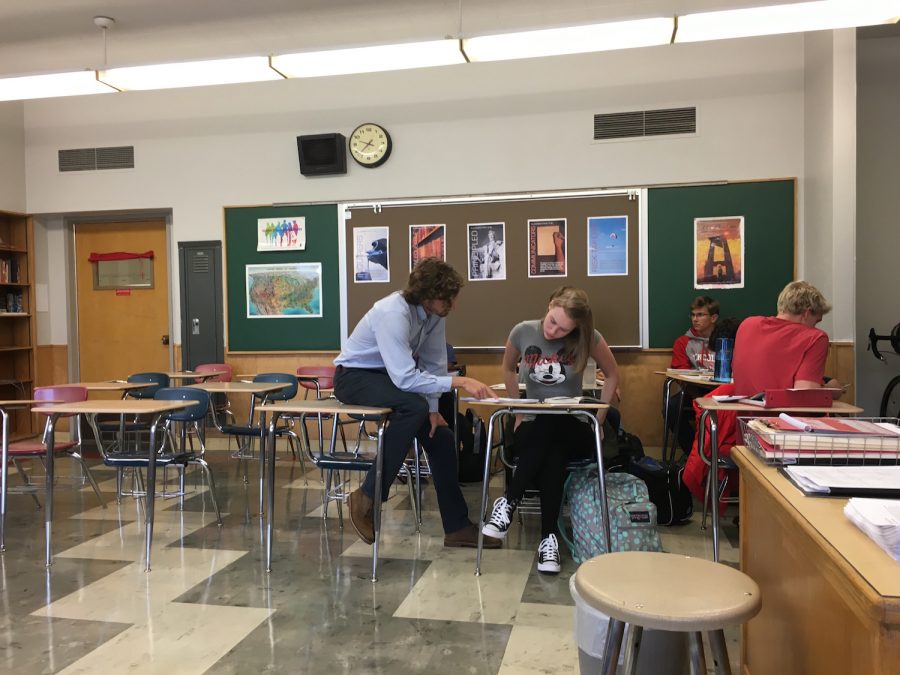 With over 70 percent of the student body out of the school, classrooms were largely empty, though students who stayed still received instruction, such as in Sam Wilson's first period class.

On Sept. 7, as many 1,000 students and a handful of staff marched through Portland in protest of the decision to postpone the bond, leaving around 30 percent of students in class.

With about 70 percent of students, and a handful of teachers gone, the students who stayed were the minority.

Many of the students remained at school for different reasons. Alex Melville stayed because she felt that she didn’t know enough about the cause. “I don’t know enough information, so I don’t think that I should have to support something I don’t fully support,” she said.

Other students like Hillary Meskien felt like their time would be better spent doing homework and it wasn’t worth walking out in the rain.

“We know what we know from Snapchat stories,” says Arya Rahnama.

However, others who were informed still made the conscious decision not to go, and urged others to do the same.

Joe Schlechter was very passionate about the protest, but, unlike others he had many reasons for why he was against it. “First off, I think the bond measure won’t do as much as they says it will,” Schlechter said, “I think [the walkout] distracted from everyone’s education and we couldn’t do what we had to in class that day because all these students were gone on a protest that I don’t think will do anything.”

Jordan Gutlerner, English and creative writing teacher, said as the protest began, “I just want you to know that, you are not allowed to get up and leave. But, I am not going to stop you. Just make sure you know why you are staying or leaving.”

Many students felt forced to stay after receiving an email saying that they would not be allowed to participate in their sporting event or practice if they were to attend the protest.

“They could’ve planned for a better day when they didn’t have a cross country meet,” said one sophomore student, “now I can’t go.”

This was the same for all fall sports, including soccer, football, and water polo. All student athletes who walked out Wednesday afternoon were supposed to get an excused absence for every period missed or they couldn’t play in their sport for the rest of the week. Due to this, many students ended up coming back to school for their second, third or fourth period classes.

Other students came back to attend their important classes. Daniil Abbruzzese, sophomore, enjoyed the protest, including the chants and having the student body come together, yet he wanted to come back to make it to class.

Even though remaining classes were small, some teachers sympathized with students on both sides and the cause.

“I believe in the issue and I believe something needs to be done, but I do feel that some people might just take the opportunity to miss school. I’m glad there are people who are willing to stand up for these things, even if they face some opposition with that,” said Andrew Riffel, math teacher, while teaching a nearly empty classroom

While some teachers like Riffel were sympathetic, other staff were hesitant; “it could make a difference,” said vice principal Alfredo Quintero.

Many teachers were proud of their students for standing up for what they believed was right.

“I am very proud of the students who walked. You know the conditions of the school and were able to use your voice,” said Douglas Siegel, French teacher.