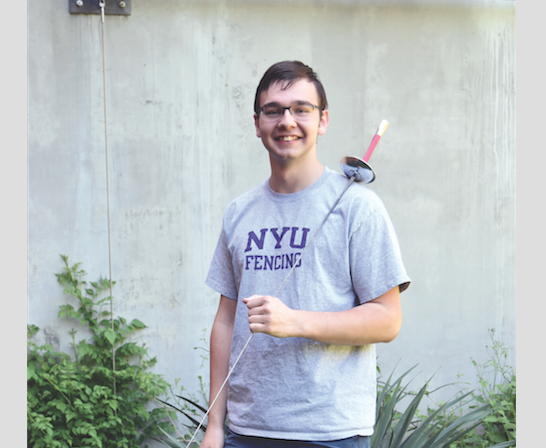 Alexandre Crepeaux will not only be competing in the junior olympics but will also be fencing for New York University's NCAA fencing.

Hundreds of students at Lincoln play mainstream sports like football or soccer. But only about 10 students fence.

Senior Alexandre Crepeaux is among the best – at Lincoln and across the nation. He proved his abilities again at the Junior Olympics in February in Cleveland.

Nine years of practice will do that. He says he’s drawn to fencing “because of the thrill of figuring out [the] opponent and strategizing for each individual touch.”

“My coaches are great, they support me so much in not just fencing, but also in my other extracurriculars like drama and Boy Scouts,” he says.

Crepeaux has fenced since he was nine. When he attended Lincoln he began conditioning, training four sessions a week and tournamenting on weekends.

He avoids focusing too much on victory, because he winds up “psyching [himself] out” and fencing poorly. Instead, he plans his actions and strives “for every point,” a tactic that has proven effective for him.

“We could not be prouder of Alexandre for not just sticking to the sport he loves, but excelling at it while balancing school, theater and achieving the rank of Eagle with the Boy Scouts,” says his father, Larry Crepeaux.

Crepeaux originally fenced epee as well, but he grew fonder of foil. The rules’ “rigidness” mesmerized him.

“He’s always been extremely committed to the things that he loves, including fencing,” she says. “He’s an amazing role model because of his respect for his teammates, coaches and referees.”

He coached Espinosa at multiple national events when other coaches were unavailable.

Crepeaux says the Junior Olympics was a “fantastic opportunity” to fence contestants nationwide. He adds, however, that there was pressure on his Olympic teammates.

The team ranked first in the last two Junior Olympics, but this year, they slipped.

“We took second,” he says, “which was, in some ways, disappointing. But we fought our hardest and left it all on the fencing strip.”

His coach, Christophe Ducios considers him “one of our best foilists” at the fencing center.

“I cannot imagine a more motivated, involved and talented fencer than Alexandre,” Ducios says. “His commitment, devotion, dedication and hard work are exemplary.”

Crepeaux will attend the Tisch School of the Arts at New York University where he will continue fencing on the university team.