Weighty issues for athletes and diets 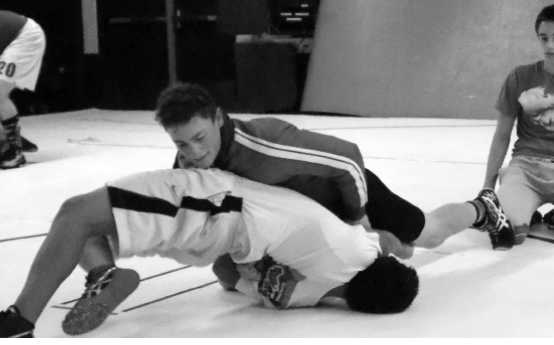 before a season. Wrestlers tried anything from starving themselves to wrapping plastic bags over their limbs

to help them sweat-off water weight.

“We don’t like to talk about dieting, necessarily. We talk about eating healthfully and in particular

When it comes to dieting, the requirements are little to none. Instead, the team focuses on something

But in the world of competitive sports, even athletes at the high school level strive to maximize their

In some sports like wrestling, rowing or gymnastics, the addition or subtraction of a couple pounds can

throw off that balance.

Wrestling comes with another complication. An extra pound can mean wrestling in a different weight

class. So many wrestlers try to eat conscientiously.

ourselves,” says senior wrestler Gage Halverson. It does help wrestlers if they can be the top of their weight

class, but cutting nutrients can affect performance on the mat.

“It’s relatively easy to lose weight, but you’re doing that at the expense of important parts of your body,

especially your brain and other metabolically active parts of your body,” says Ben Hoffman, a pediatrician at

of their performance and, more importantly, risk long-term effects on health.

To eliminate extreme diets, the wrestling community has turned to a program called the Optimum Performance

Calculator. It considers a wrestler’s weight and body composition, and calculates how much weight the wrestler

can safely lose in one season. That determines the lowest weight class in which a wrestler can compete.

“We talk about food being a fuel and without that fuel, they’re not going to be able to perform well,” says

Although the adoption of the performance calculator may have mostly eliminated starvation dieting,

health care providers view it with some skepticism.

“Nobody has really looked at what those sort of estimates mean in terms of long-term performance,” Hoffman

says. No one knows how these calculations could affect a teenager when he or she is 50, for example, he adds.

Nutrition plays a crucial role in all sports. Along with wrestling, gymnastics and rowing are just two other

Gymnasts strive to eat complex carbs and nutritious foods that they are comfortable with.

night before,” says freshman gymnast Madison Fassiotto. Without these crucial nutrients, performance can

For rowers, what they eat before a regatta is less regimented. But they still have to focus on eating

“Nutrition plays a moderately large role in my life. I don’t go out of my way to count calories and such, but

Sometimes it’s as simple as athletes just don’t want to let the team down. If a wrestler is expected to be a

certain weight, there can be self-imposed pressure to meet it.

“The day of a meet it really depends on how my weight is that day,” says senior Ben Hofmann. “On a

good day, I’ll be underweight by a few pounds and I can eat a salad or a small sandwich.” If he is under by

less than a pound then he will probably not eat, he says, until after he wrestles.

But many coaches in all sports steer athletes away from extreme measures. Doctors echo the same

going to injure that kid in some way,” says Hoffman. “Maybe not visibly in the short term, but probably in the