Students get their hands dirty 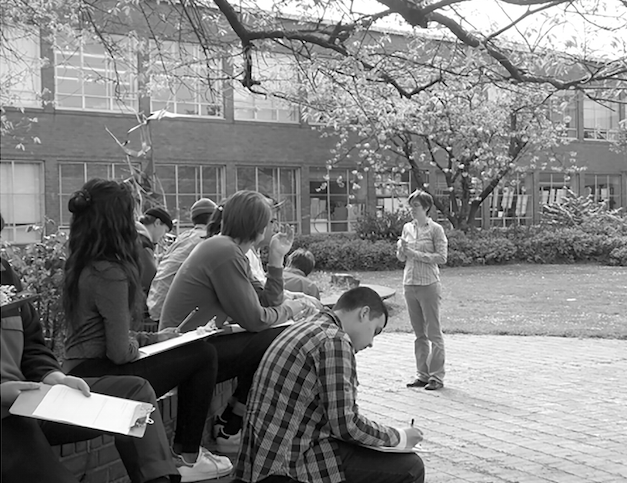 Laura Armstrong teaches her gardening class in the courtyard on an early spring day.

During summer 2014, a group of Lincoln students decided to start a small, fenced-in, garden in the courtyard just outside of the school. Since then, nine garden beds have been added and a drip watering system.

The garden didn’t just jump from being a small student-led project to a full-scale garden in a blink of an eye, it took the nurturing and hard work of the the school’s Gardening class.

Last school year the class consisted of a measly 12 students scrapped together at the last minute due to the class not being offered on the forecasting sheet..

“It was about a week or two before school started,” says Biology and Gardening teacher Laura Armstrong. The class was advertised in the daily announcements, spread by word of mouth and recommended by counselors to anyone in need of a science class.

This year, plenty of students are digging in. The class now consists of two periods, each with 28 students, all juniors and seniors.

While many of the students chose the class because of an interest for gardening, some were also intrigued by the teacher.

“I had Ms. Armstrong last year and I really liked the way that she taught,” says junior Ellie Stark.

Armstrong’s science background helps her with the gardening class curriculum, which combines subjects including agriculture, biology, botany, social science and the physical work of working in the garden.

Students are not actually graded on the success of their garden.

“I definitely don’t grade on how your garden grows, because that could be pretty unfair,” says Armstrong, in her fourth year at Lincoln. “In fact, the gardening I kind of approach, as a science teacher, as one big experiment.”

Instead, the grade consists of four categories: presentations, classwork, tests and classwork.

While the gardening aspect isn’t necessarily the most important part of the class, students are provided with some space to grow their choice of plants.

The produce the students grow is eaten, shared with the Culinary Arts Class and most recently, donated to the Portland Family Homeless Shelter.

The class helps students learn not only how to garden, but understanding the biology of what allows plants to grow and what controversy surrounds agriculture.

For example, genetically modified organisms and pesticides are controversial topics in agriculture that are considered in the class. While pesticides are not used in the garden, GMOs are a tougher subject.

“A surprising number of the seeds that you get are genetically modified, so it is quite possible that we have some of those in our garden,” says Armstrong.

The students in the class are just beginning to learn about the positive and negative effects of GMOs.

“It’s kind of a touchy subject, we’re actually just trying to figure out what side we’re on,” says Botchway.

The growth of this class from one group of 12 students to two classes of 28, represents Lincoln students desire for hands-on experience and learn how science affects everyone in the real world.

“I really like the environment of how we learn, and it’s a lot of hands on stuff which is super helpful for our learning,” says Stark.