Cardinal Times makes its picks for the 88th Oscars 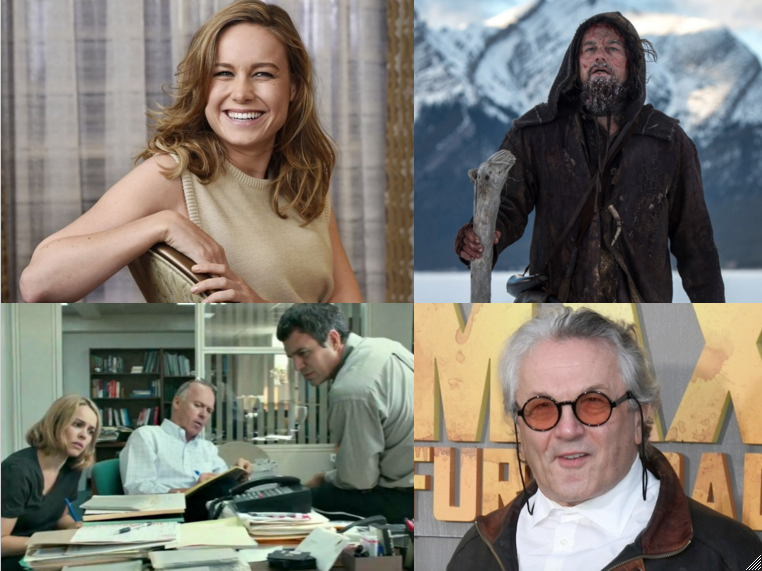 Top left: Brie Larson's breakout performance in "Room" is likely to win her an oscar for the first time. Top Right: After losing four times prior, 2016 could be the year Leonardo DiCaprio finally wins his oscar. Bottom Right: Although it will not win many minor technical awards, it is expected that "Spotlight" will win Best Picture. Bottom Right: After creating the best action film of 2015, George Miller is well deserving of a second oscar, this time, in the category of Directing.

The most anticipated, and possibly the most prestigious, award show of the year is coming soon and multiple predictions have already been made. The Academy Awards has recognized some of the best movies of the year in their nominations. Our story will predict  which movies, actors and directors will most likely take home gold on Feb. 28.

Although the Golden Globes for best picture went to “The Revenant” (drama) and “The Martian” (comedy or musical), the most likely Oscar-winning picture of the year is “Spotlight.” As good as this movie is, I don’t expect it to take home many awards aside from best picture or writing. The acting is good;  it will most likely win based on its realism. Because the film is based on true recent events, the viewer can feel the injustice the Spotlight writers felt when trying to expose the pedophiles of the Catholic church.

It’s been well known that the Academy picks movies based on their realism. That’s why movies such as “Star Wars” (1976) and “The Dark Knight” (2008) have received accolades for visual effects and acting performances but were never recognized as best picture winners. I think “Spotlight” has “The Martian” beat in realism and although “The Revenant” is also based on a true story, the movie does not compare to “Spotlight” in its importance to society.

Who got snubbed?: The Academy has brought its list of best picture nominations down to eight following last year. But if there was one movie from 2015 that deserved a ninth spot, it would be “Creed.” Although the movie is essentially another Rocky picture, the performances by Michael B. Jordan and Sylvester Stallone are some of the best of their careers. It would be unlikely for the film to win if it was nominated, but it still should have been recognized by the academy.

Best Actor in a Leading Role

After four disappointing losses to other actors, coupled with multiple snubs from the Academy for admirable performances, Leonardo Dicaprio has to win this year. Though Michael Fassbender, Bryan Cranston, Eddie Redmayne and Matt Damon played their roles to excellence, none of their roles were as demanding and thoroughly executed as DiCaprio’s. His portrayal of Hugh Glass’s survival of a bear mauling featured some of the best acting in his career. A victory should be as likely as Marlon Brando winning for “The Godfather.”

Best Actress in a Leading Role

Even though we haven’t seen three of the five nominated actresses for this category, it’s safe to predict the likely winner. Larson’s performance in “Room” was by far the best of the year because of the complexity of her representation. She plays a woman, kidnapped at age 17, who lived in the shed of her kidnapper’s house for seven years and, at age 19, conceived his child. Her performance is remarkable because it causes the viewer to ponder the difficulty of both her difficulties living with her captor and raising a child who knows no more than what’s in the shed. Cate Blanchett is an incredibly talented actress who has won in the past, but Larson made the performance of the year.

Who Got Snubbed?: Because the Academy often chooses films to win based on their importance and pertinence to society, it was a major upset that Charlize Theron was not nominated for her performance in “Mad Max: Fury Road.” The importance of her character comes from her role as “Imperator Furiosa,” a supposed conformist in a society run by men. She rebels to rescue the lives of enslaved women who constantly stress that they are not “things.” She was the entirety of the film’s societal pertinence because she projected a message of feminism and equality for those forced to conform to totalitarian dictatorships. It’s a shame that Theron’s masterful performance and portrayal of equality for women did not receive a nomination.

Deciding on this one will most likely be the most skewed category for predictions. But we broke it down into who will win, who comes in second and who deserves to win. The winner will most likely be Alejandro González Iñárritu for “The Revenant.” Although the film is not all in one shot the way last year’s winner “Birdman,” the flowing and often long camera shots meant good directing was crucial.

History could also be made if the film wins best cinematography because Emmanuel Lubezki would take home his third consecutive award in the category after winning for “Gravity” and “Birdman” respectively.

A close second is Tom McCarthy who is still in contention. In my eyes, George Miller, director of “Mad Max,” deserves the award all the way. At age 70, Miller went through days of filming in the Australian desert while making actors perform incredibly intricate moves so the mostly-CGI production would look seamless. Because of this, the film will most likely win multiple minor technical awards for sound, makeup and production design.

Best Animated Feature: “Inside Out”

Best Adapted Screenplay: “The Big Short” (Based off the novel “The Big Short: Inside the Doomsday Machine” by Michael Lewis. Adapted by Charles Randolph and Adam McKay)