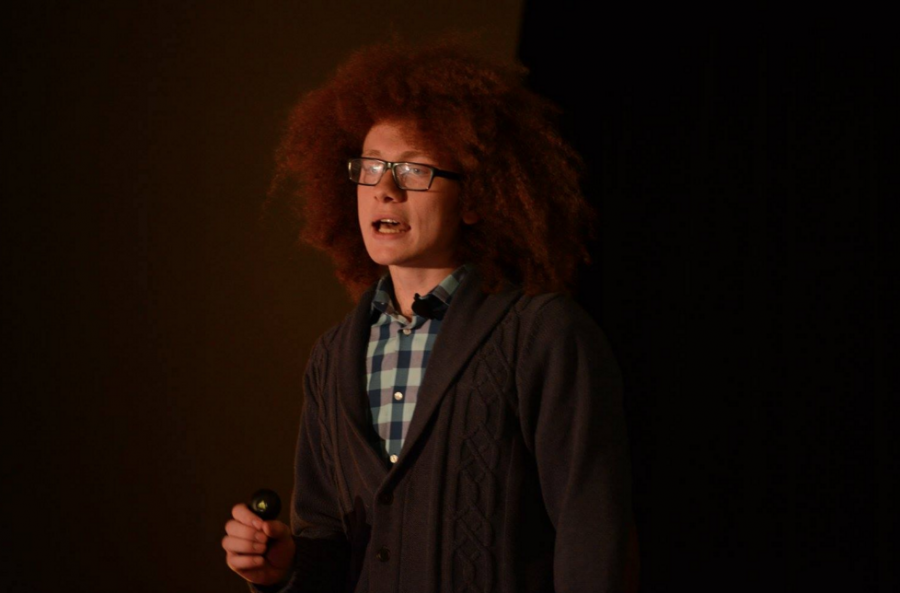 Orion Cleaver delivers his speech on the importance of language and speaking in general.

The TED organization came to Portland last month to host an independent event to showcase the voices of the youth. Lincoln seniors Nawaal Imam, Sandra Hong, Noah Hoffman and junior Maayez Imam organized the day-long event. The main goal of the theme, “Made in the Future,” was to communicate the idea that what happens later in life can be left up to chance unless you choose to change it. There were nine student speakers at the event, including some from Lincoln, and each shared ideas worth spreading. Here are reports of two Lincoln speakers:

Social network, Montse Mendez says, is an an oxymoron.

The Lincoln senior has been through several transitions in life. She’s faced multiple culture shocks yet remains a strong leader and advocates for face-to-face communication.

She was born in São Paulo, Brazil, and grew up in Mexico City, speaking Spanish. When she was a sixth grader, her family moved to Cincinnati. She told the TEDX talk audience that moving from a city of nearly 21 million to an Ohio suburb, where people spoke a different language, was not the easiest transition.

“The hardest part was adjusting to the different group of people,” Mendez said. “The new language was difficult as well, not just in how it was spoken, but also in how differently it was expressed through hand gestures.”

The family moved to Portland in 2014, where she enrolled at Lincoln. She quickly proved herself as a leader, becoming the communications representative of M.E.Ch.A and founding the New Student club, which helps integrate students into the Lincoln community.

“Since I was little, I’ve very naturally taken on leadership roles,” she said. “I honestly can’t say what I got it from, but it is a part of me and something that makes me happy.”

For her TED talk, Mendez took the event’s program, and showed her picture and bio to the audience. She asked, “So you all know me now, right?” She did it to illustrate how social media does not tell the full story and how it creates a misleading, flawless image.

The pressure to constantly make oneself appear perfect can cause depression and social anxiety, she said, the antithesis of the perceived purpose of social media.

“I get that social media connects people to others, but if these people are overly attached to this false image of themselves, they become unsure of who they really are when they express themselves differently,” she says. “You even isolate yourself because you don’t necessarily question who you are past what’s on your social media profile.”

People, she told her audience, are not just the perfect images they let the world see. The ups and downs that people may not be keen on posting are also part of being human.

Senior Orion Cleaver has devoted his life to the art of speech. So it was no surprise he based  his TED talk on the necessity of communication.

Before he started freshman year, Cleaver says that he wasn’t too focused on what to study. However, once he became a member of Lincoln’s Speech and Debate team, he has never since looked back.

“I joined the team off a whim,” he said. “It’s given me the opportunity to explore a whole different realm that I wouldn’t have otherwise stumbled upon.”

After joining the team, he found he had a passion for public speaking and communication. He’s also proven his skills in his pursuit of Ethics Bowl and on the constitution team, which won the We The People National Invitational in 2014. But he says prefers debate because it allows him to speak from a more individual perspective.

“Constitution team feels more like a set curriculum than debate team does,” he says. “Speech and Debate lets me speak about what I want, do the research I want, make the arguments that I want to make. It allows me more freedom in what I do.”

Language, he stressed, is one of the most powerful weapons on earth – an idea he  promotes as he continues his pursuit of speech.

“People need to use their language first in order to create change.”