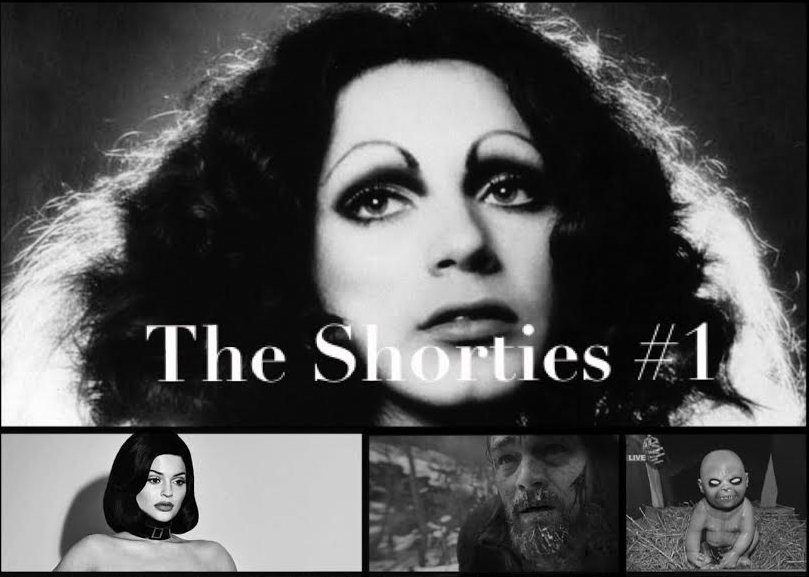 Top: Actress Holly Woodlawn dies on Dec. 6, 2015, aged 69. Bottom left: Kylie Jenner gets called out on Tumblr for a controversial wheelchair photoshoot. Bottom center: Leonardo Dicaprio's new film "The Revenant" has spawned several odd rumors. Bottom Right: A man in Ohio is paying $500 in fines a day to defend his right to display an enormous zombie version of the birth of Christ right in his front yard.

Welcome to our new series called “The Shorties,” where we review the past week in pop culture events.

In possibly one of the least surprising moves ever, Kim Kardashian-West and Kanye West have named their newborn baby Saint West.

Holly Woodlawn, 1970s underground film star and trans icon passed away last night in Los Angeles at 69 years old. Her manager, Robert Coddington, confirmed the cause of death as complications of cancer. Woodlawn is known for her plucky roles in films and her involvement in Andy Warhol’s inner circle. She was the inspiration for Lou Reed’s famous song, “Walk on the Wild Side.”

Hitchhiked her way across the U.S.A.,

Plucked her eyebrows on the way,

Shaved her legs and then he was a she.

She said, hey babe, take a walk on the wild side.”

The Grammy nominations are out and Taylor Swift, Kendrick Lamar and The Weeknd all cleaned up.

In other news, rapper Omarion failed to receive a Grammy nomination for his song “Post to Be,” so he went on twitter and compared himself to Jesus. Trend?

Remember two weeks ago, when Donald Trump made fun of New York Times reporter Serge Kovaleski who has arthrogryposis? Buzzfeed just gave disabled people a chance to hit back.

Similarly, in a reaction to Kylie Jenner’s controversial wheelchair cover for Interview Magazine, an actual disabled woman named Erin posted a picture of herself on tumblr in similar attire, with the caption: “I can barely get people to make eye contact with me, let alone land a cover shoot. If being in a wheelchair is trendy now, I’ve apparently been a trendsetter since long before Kylie was born.” While Kylie has given a face to the issue, she isn’t the first model that photographer Steven Klein has placed in a wheelchair for an “edgy” look. It’s easy to blame the privileged 18 year old, but why would did 50 year old Klein think it was a good idea to put a young and eager-to-please girl in startlingly risqué bondage attire in a wheelchair on the cover of a magazine?

In Ohio, a man is paying $500 in fines a day to defend his right to display an enormous zombie version of the birth of Christ right in his front yard. To support his cause, and Zombie Christmas in general, you can donate to his fund, which has raised $355 so far. Alternatively, if you want to spend your money on non-absurd things, here’s a website that gives a sweater to a homeless greyhound to keep them warm for the winter in exchange for every purchase. I mean…what kind of person do you want to be?

The Zoolander 2 trailer came out, quickly followed by a petition to boycott the film that has garnered over 20,000 signatures so far. The trailer introduced new character All, an androgynous model played by Benedict Cumberbatch. The petition claims: “Cumberbatch’s character is clearly portrayed as an over-the-top, cartoonish mockery of androgyne/trans/non-binary individuals…This is the modern equivalent of using blackface to represent a minority.” By lowering the profits of Zoolander 2, the boycott aims to “tell Paramount Pictures, Ben Stiller, and Benedict Cumberbatch that mocking transgender/androgyne/gender fluid individuals is not okay.”

Refinery29 came out with a super cute under $25 gift set for all Secret Santa needs.

Comedians Chelsea Peretti and Jordan Peele got engaged, to the delight of everyone everywhere! Peretti tweeted the news: “My fiancé (lololol) @JordanPeele proposed to me last night during the family talent show lolol”

The Revenant, latest film from Alejandro González Iñárritu, has been attracting strange headlines. First, there was the rumor that Leonardo Dicaprio is molested by a CGI bear in the movie (false), then that Dicaprio actually slept in animal carcasses during shooting (true). Dicaprio said of filming, “I can name 30 or 40 sequences that were some of the most difficult things I’ve ever had to do. Whether it’s going in and out of frozen rivers, or sleeping in animal carcasses, or what I ate on set. [I was] enduring freezing cold and possible hypothermia constantly.”  When will this man get an oscar and find peace?

Anyway! Look at this sleepy ferret.