Nurse Mary Johnson to the rescue 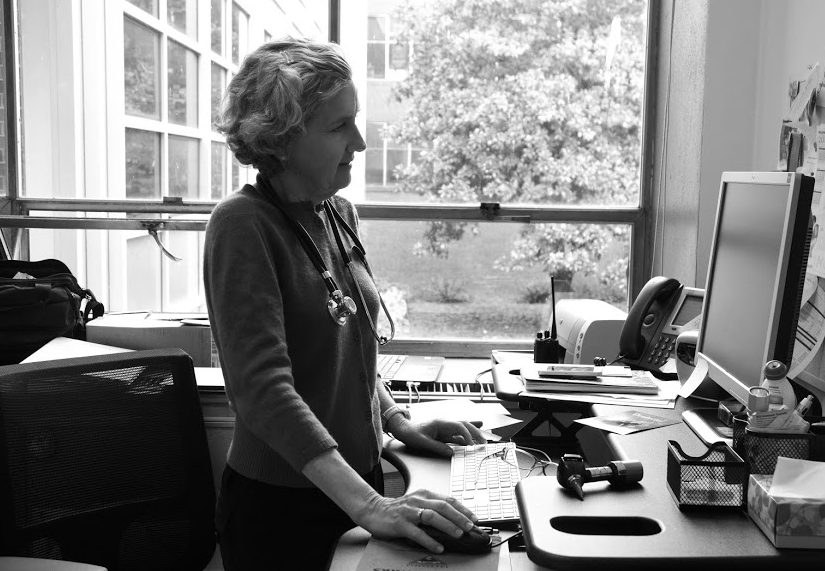 Nurse Mary Johnson says that standing up at her desk helps her stay in shape.

A teacher rushes into room 126, the nurses waiting room. A student has fainted in the middle of class. Quickly but calmly, nurse Mary Johnson grabs her coat and marches out of her office.

In her 20 years as Lincoln school nurse, Johnson has seen emergencies ranging from fainting spells to intense allergic reactions. It’s easy to see why she’s one of Lincoln’s most valued staff members.

Johnson describes herself as “a mini urgent care clinic.” Most students know that she is able to treat minor physical injuries, but fewer know that she counsels students under emotional stress.

“Lincoln has a high population of students with high needs around stress and anxiety, and I’m here to support students in managing these needs,” Johnson says.

For the past eight years Johnson, along with the school psychologist Jim Hansen, has run a behavioral therapy skills group, where she meets with students under stress once a week to help regulate their emotions.

“She comforts people not only when they’re in physical pain, but also when they’re in mental pain,” says Denali Hall, a Lincoln senior who often has turned to the nurse during times of stress.

Johnson has helped many students handle stress. She believes that reducing student stress and anxiety should be one of Lincoln’s top priorities. Often, she says, that’s the reason students come to her, sometimes faking sickness.

“If they’re faking an illness, then something’s not right. I always feel like if someone comes to see me, there must be a reason why they’re here and not in class,” says Johnson. “It’s more a matter of when do students feel comfortable telling me why they’re really here. Usually after they get to know me they’re pretty truthful.”

Johnson helps countless students over the course of a school year. She is busiest on days when tests like the ACT, PSAT or IB occur.

Even on non-tests days, she’s swamped. On a typical morning in early November, 10 students came and asked for her service.

“Today we’ve had an ankle injury, a tooth injury, a sliced finger, two episodes of fainting and a stomach virus, and it’s only 10:20,” she says. For her, “there is no average day.”

Johnson was born in France, but moved as a toddler with her family to California where she grew up. She graduated from the University of California, Berkeley with a degree in physiology, and decided to pursue nursing instead of medical school.

“I preferred the nursing philosophy of taking care of the whole person and not specializing in one field,” Johnson says.

At Columbia Nursing School, Johnson discovered a passion for pediatrics and working with adolescents. After graduation, she worked with cardiac patients in New York City. She enjoyed the experience, but she knew that there were other jobs that would better suit her.

In 1988, Johnson and her husband moved to Portland. She viewed the city as the perfect place to settle down and start a family. Johnson took a job at Emanuel Hospital. One day, she spotted an advertisement for a school nurse

“That’s exactly what I want to do,” she remembers thinking..

After working as a substitute school nurse for a year, she applied for a full-time position. She worked at a series of PPS schools including Lane Middle School, Mt. Tabor Middle School and Ainsworth Elementary School. Eventually, she ended up at Lincoln and has worked here ever since.

Johnson’s contributions to Lincoln are limited to four days a week. On Wednesdays, the school district moves Johnson to Skyline K-8. Johnson says her absence on these days hurts student health. When she isn’t around, she says, sick students cannot ask for her advice and are more likely to go home and miss class. Teachers are more likely to call 911 unnecessarily, she adds, because she is not available to assess the seriousness of a given situation.

PPS restricts Johnson, and school nurses in general, from providing over the counter medication like ibuprofen to students, a policy she hopes will change in the future.

But back in her office on a typical November day, Johnson is off to give emergency care to the student who fainted. She’ll return to her office and less pressing issues when that’s finished. For Johnson, it’s just another day at the office.

“I’ve been here for 20 years, and it only feels like two because I love it so much.”