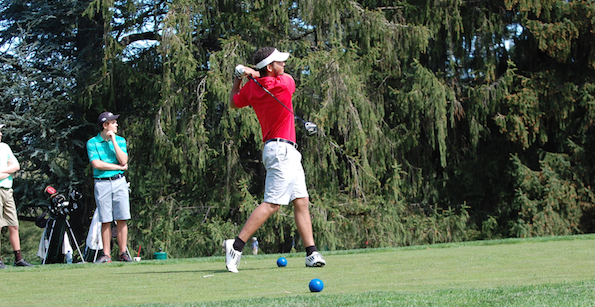 Sports teams are traditionally places of community and collaboration, but due to Lincoln’s predominately white student body, finding diversity among its teams can be a difficult task.

“Every coach here would love to have a broader mix of kids on their teams,” athletic director Jeff Peeler said. “I know for a fact that it’s on their mind.”

Due to Lincoln’s 74 percent white population, the school’s sports teams’ diversity lags behind other Portland Public schools. For example, Jefferson’s football team is predominantly African American, according to Peeler.

“It’s a sample set of the overall student body,” he said.

Golf has a deep history of exclusion due to the fact that the many of the best golf courses in the world are private. Many of those clubs, such as Augusta National and Shoal Creek, have histories of excluding minorities. With the exception of Tiger Woods, there has never been a stand-out minority golfer.

“Because golf is known to be predominantly white, it is hard for minorities to get into the sport,” junior Jonah Pemberton said. Pemberton is the only African-American golfer on Lincoln’s boys’ golf team this year. But he says the lack of minorities on the team and involved in professional golf today does not concern him.

“The best player in the history of golf is a minority,” Pemberton said, referring to Woods, the former world No. 1 for 683 weeks, who is African-American, Asian, Native American and Caucasian.

Pemberton’s coach Jeff Kragt is also aware of golf’s exclusionary history, given his jobs at Pumpkin Ridge and Portland Golf Club, some of Oregon’s foremost private golf clubs. But he anticipates that minority players will become more prevalent.

“I have seen multiple private country clubs welcome members of many different races, religious backgrounds, sexual orientations and more,” Kragt said. “Granted, the majority of members at golf clubs in most parts of the country are Caucasian, but the minorities are continuing to grow the game of golf as a whole.”

“The tennis ball doesn’t know the color of who hit the ball,” he said. “The ball only knows if the ball lands in the court and if it comes back.”

“Historically, tennis was probably highly correlated to socioeconomic status. Today, the cost to play tennis is relatively low compared to other sports,” he said. “It is probably much cheaper to outfit a high school tennis player than a football player.”

However, as a result of that historic exclusion, children of minorities might not be introduced to the sport.

“Since tennis is often taught from one generation to the next, it may take a generation or two for tennis to ingrain itself with minorities,” Wilson said. “Over time, I believe the white sport reputation will be eliminated.”  Last season, the boys’ tennis team was 35 percent non-white.

Minorities playing tennis have not faced any outright disparities in their treatment due to race, but they do occasionally notice a difference.

“I did face some judgement that I’m just another Asian playing tennis,” said senior Duane Lee, who is Korean-American. “Some people think Asians play tennis because they’re incapable of playing ‘intense’ sports like basketball.”

Sophomore Simon Chow, who is Chinese-American, notices that while he “gets treated the same way on the (Lincoln) team as everyone else,” some tennis teams like “Madison and Westview have a lot more Asian people.”

Lee believes that while the landscape is changing, money does still play a role in that disparity in diversity between teams.

Lincoln Equestrian coach Deborah Melian agrees time is changing the perception of her sport. In fact, she disputes her sport’s upper-class white reputation by pointing to the diversifying professional landscape, in which racial stereotypes are being confronted.

“Golf and tennis have been considered white sports, but athletes such as Tiger Woods, Arthur Ashe, and the Williams sisters have changed that,” she said. “Equestrian also has quite a bit of diversity at the pro level.”

This year, Lincoln’s Equestrian team will partner with Roosevelt High School’s team, which will increase diversity.

Another sport with a white-only reputation is sailing. It was historically exclusive to the wealthy, who could afford exorbitant membership fees to yacht clubs. That is beginning to change, says David Valentine, manager of Willamette Sailing Club, where Lincoln students sail.

Sailing clubs are beginning to recognize the value of an “all-inclusive program which is vibrant with energy,” said Valentine. “Many traditional ‘member only’ yacht clubs are struggling around the country as their members become ‘old, pale and stale.’”

Though the Willamette Sailing Club charges membership fees, the majority of its activities are open to all. The club also works with local nonprofits, such as the Salvation Army, Neighborhood House and New Avenues for Youth to promote sailing among the children those organizations work with.  “I’m proud of this program because it offers access to sailing for anyone,” Valentine said.

Peeler believes that diversity is beneficial to any sports team. “You and I might not have ever actually interacted, but together we both happen to like basketball,” he said. “The experience is better for everyone when everyone is not exactly the same.”