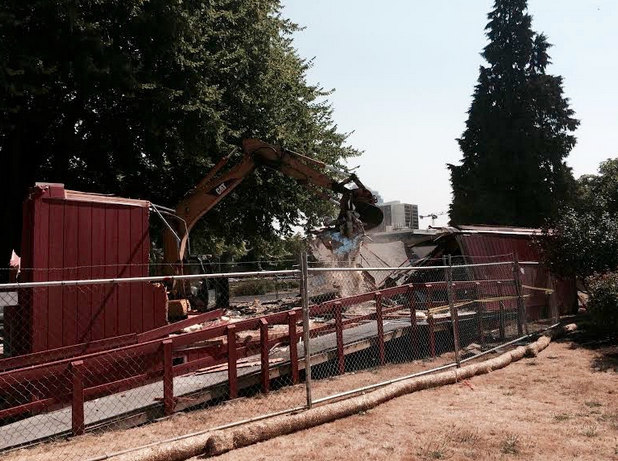 Portable 2B was completely destroyed while 2A was forced to be razed due to smoke and water damage.

The cause of a fire that destroyed a portable on July 29 remains undetermined, according to the Portland Fire Bureau. Meanwhile, students and teachers are left to cope with the crunch.

The fire broke out around 9:45 a.m. Firefighters extinguished it by 10:10 a.m., but not before it had destroyed two classrooms and caused $12,000 in damage, the fire bureau said.

Lincoln juniors Marin Christensen and Jack Sanders were jogging near the school when they smelled smoke.

“We joked that the school was burning down but we didn’t think that, obviously,” Sanders said. The pair were the first to discover a small fire under the elevated walkway leading to the classrooms. Christensen dialed 911.

Shortly after that call, school custodians also pulled the fire alarm when a transient alerted them to the blaze. Thirteen fire trucks and 30 firefighters responded.

Classroom 2B, where the fire began, was devastated, and classroom 2A had to be razed due to smoke and water damage, according to Peyton Chapman, Lincoln principal. She called the portable “not high quality.”

The official cause of the fire is unknown. But investigators have ruled out arson and electrical issues.

“The fire may be associated with transient activity that has been occurring next to the portable,” said lead Fire Bureau investigator Nicole Fuge.

Custodians had noticed transients earlier that morning, according to Chapman, but not much more than usual. They ran off two people lighting up a spoon near the portables. The men soon returned, custodian Ronald Hoodye said, and next seen leaving the area as the fire spread.  “They could have been lighting up again and some of it fell on the grass,” Hoodye said.

A “person of interest” was observed leaving the scene on a bicycle the morning of the fire, according to a fire bureau report, but has not been located.

The 1,890-square-foot portable did not have a fire detector, according to the report. It was one of two portables added to Lincoln in 2001. The portables were meant to be temporary but have been kept due to growing attendance.

Chapman hopes to have the portable replaced by October, but she said that may not occur.  “It could be [as late as] next year,” she said. It all depends on the district office, who didn’t respond to requests for comment. “PPS knows we need the space, so hopefully they’ll work with the city to get the permitting worked out,” she said.

Bailey and Ten Eyck moved to Room 5 in the cafeteria, forcing the culinary arts class to move into the kitchen. Pearlz needs to move classrooms three times a day to create space.  “We like classroom sharing, especially among members of the same department,” Chapman said, “but forced room sharing stresses teachers, which in turn stresses students.”

Pearlz added, “my fellow teachers have been very helpful and sympathetic, and that makes it much better.”

Most of the teachers’ belongings survived the blaze, according to Pearlz and Bailey, who on Friday visited the warehouse where the items were ridded of smoke. The district compensated the teachers for items damaged beyond repair, Chapman said.

Ten Eyck said that his first reaction to the fire was “befuddled laughter,” but he is not “too bummed about it.” “It’s not like I can do anything about it, so I just have to go with the flow,” he said.

Chapman hopes that rebuilding can instigate improvements to the school. She also would like the remaining portable replaced, and a third one added.

”We should really start fresh,” said Chapman, “and we would ideally like another to cope with the extra hundred students this year.”  Enrollment was officially capped at 1,350 in 2013. This year, there are 1,722 students.

Chapman is relieved that the fire occurred over the summer, so teachers and students were not at school.

“What I was thinking as I watched the fire was that they couldn’t have gotten out (of the portable),” she said, “there’s only one way in and one way out.”