The Cardinal Times • May 4, 2015 • https://cardinaltimes.org/8771/showcase/seattle-high-school-juniors-opt-out-of-the-sbac-lincoln-sees-effects-2/ 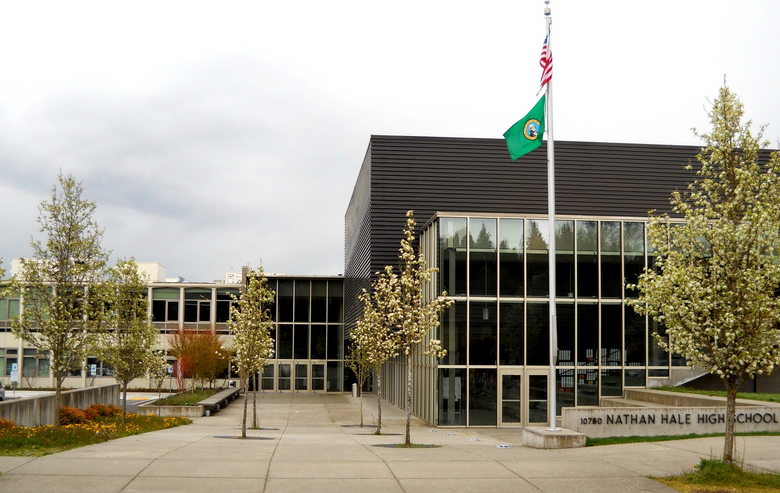 Nathan Hale high school had approximately 270 students opt out of the SBAC, compared with Lincoln's 100. But, in both situations, the school will need to make up by increasing participation in future years, if they plan on receiving funding and adequate ratings.

Nathan Hale High School in Seattle was to have its juniors take the first part of the SBAC test on April 24. But to the school’s surprise, all of them opted out. Lincoln hasn’t had nearly as many of its students opt out, but enough have done so that its effects will be evident in the long run for both schools.

The SBAC (Smarter Balanced Assessment Consortium) is a standardized test reminiscent of OAKS (Oregon Assessment of Knowledge and Skills) but with a twist: it has an emphasis on real-world skills. On the website, it is written that “Smarter Balanced is guided by the belief that a balanced, high-quality assessment system—including formative, interim, and summative components—can improve teaching and learning by providing information and tools for teachers and schools to help students succeed.” The test is aligned with the Common Core State Standards of 18 states and one territory.

But the juniors at Nathan Hale unanimously said “no” to this new type of test. Their decision made national news and the #1 trending topic on Facebook and Twitter. “I thought it was really interesting what the students did,” junior Madison Kenny said. “It does reflect poorly on the school and could have negative repercussions, but, at the same time, I think that if they don’t want to take standardized tests, they shouldn’t have to”

The process of opting out itself requires students and their respective parents or guardians to fill out a single form on which they state their excuse, which can be religion or disability. Junior Grant McElroy wrote on the form that he was opting out for religious reasons. “I knew that I would be able to get a high enough score on the ACT to compensate for the SBAC,” McElroy said. “It would have been a waste of time because we’re missing a lot of class that is pretty necessary.”

But there is a disclaimer in the middle of the form which says that “[s]tate tests are used to rate schools-both on how well students do overall and on how many students take the tests. If a school falls below 95% participation, the school’s rating falls.” The test is also required by the federal No Child Left Behind Act.

“There can be unintended consequences for how the school is viewed and rated,” vice principal Cameron Neal said. “The test helps provide data to what students need to be learning, and I think that without it, it will make it difficult for these teachers to do their jobs.” Washington superintendent Randy Dorn said, in a statement, that the test would also allow for teachers to get a better understanding of the students they teach, but without it, educators will have a harder time finding learning gaps to fill.

Seattle teachers were already under enough pressure to administer the test even before the risk of budget cuts. According to the Seattle Education Blog, Seattle Public Schools superintendent Larry Nyland threatened that teachers would lose their licenses if they did not comply.

Lincoln learned that it will fall into a similar situation as Nathan Hale. Because so many students have opted out, the school falls short of the SBAC benchmark and, as a result, will need to have much higher participation rates in years to come in order for the school to receive funding. “The state puts this data on our “report card” and decides our rating based on our two-year-averaged participation rate,” Principal Peyton Chapman said. “Because of this setback, it will take us several years to get out of our current situation.”

Students also recognize the potential dangers of choosing not to take the test. “People don’t realize that if students don’t take standardized tests that are demanded by the state, funding and class choice will both be cut,” junior Harry Thoma said. “It’s unfair that students can’t take an hour or two out of their lives to take a test. It’s a really selfish thing to do.”