Constitution team members take center stage to receive medals for winning the national championship in the "We the People" competition on the Constitution and Bill of Rights. They were honored at a banquet on April 28 at the George Mason University Inn outside of Washington, DC. 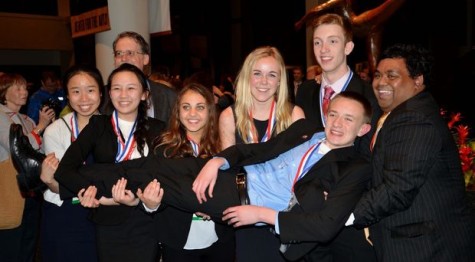 It is the second time in three years that a team from Lincoln has won the title and third year in a row for a school from Oregon. Grant won last year.

Lincoln has won the national championship five times, more than any other school in the nation.

The Constitution team has made it in the top 10 teams in the nation in the “We the People” competition underway in Washington, DC.

They met at the Portland International Airport at 6:30 a.m. on April 24 and landed five hours later in the capital ready to compete.

The team spent its first two days sightseeing and studying up on current events. They got to meet with Supreme Court Justice Ruth Bader Ginsburg.

Competition took place Saturday through Sunday, and, because they made it in the top 10, continues on Monday. Lincoln has made it into the 10 consistently since the competition began in 1987. Lincoln has won the national title four times.

“We have a good shot,” said sophomore Mai O’Neill, “but it’s not guaranteed by any means. In these next few days, how we do in the eleventh hour will determine the results.” But, she added, “We’re all going to feel really fulfilled actually applying the knowledge we’ve been studying for weeks. It’s gonna be really cool.”