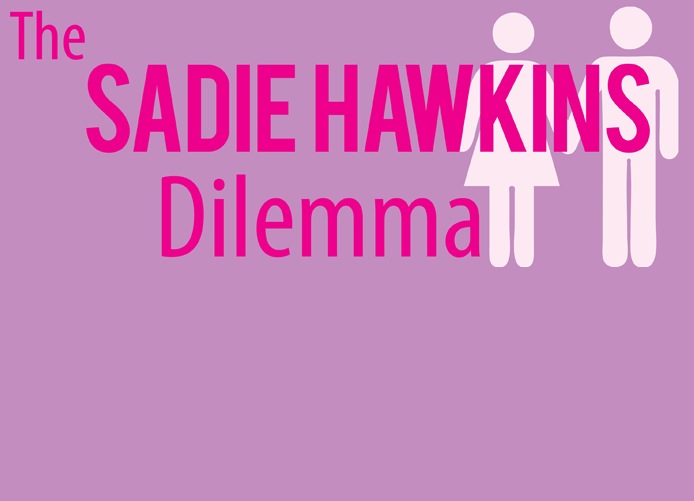 As the winter semi-formal inches up on Jan. 25, students are wondering who to ask to the dance, and more so – who asks whom? Even though the sophomore student council says the Sadie Hawkins rule is not officially part of the dance, the tradition is still alive. However, not all students view Sadie Hawkins in a positive light.

A Sadie Hawkins dance is a school function, the only difference being that the girl invites the boy, whereas usual custom dictates that the boy asks the girl.

While most students know what a Sadie Hawkins dance entails, few know the origin and history of the namesake. Cartoonist Al Capp was made famous in the 1930’s with the rising popularity of his comic strip, “Li’l Abner,” that featured a character named Sadie Hawkins. According to the comic, Sadie was the “homeliest gal in the hills,” a young girl who was tired of waiting around for the bachelors of the town of Dogpatch to court her. The strip that was published on Nov. 15, 1937 triggered the Sadie Hawkins dance custom. In the comic, Sadie’s father and a prominent resident in Dogpatch, arranged for there to be “Sadie Hawkins Day,” on which the unmarried women of the town would go on a foot chase to catch the bachelors. If a man was caught, he would then have to marry his captor.

Suddenly, this notion of the woman pursuing the man started popping up within schools throughout America, and in many cases, official Sadie Hawkins Day school dances were instituted in high schools and colleges across the country.

At first, people were enamored with the “female-empowering” Sadie Hawkins Day dances, but some contend that they have become an outdated tradition. According to junior and Feminist Club co-president Molly McLean, a Sadie Hawkins event is quite the opposite of female empowerment. “I think the idea behind the dances is pretty demeaning,” she said. “It implies that it is a special occasion in which young women are allowed to have influence in their choices. I do not see it as female empowerment because what equality looks like is the anti-stigmatization of girls asking guys.” McLean explained that while having the girl pursue her date was once a very progressive idea, the Sadie Hawkins tradition is no longer an advanced concept.McLean also claims there should not be one decided day on which a female is actually given permission to ask a boy to a dance.

Students have found other reasons to oppose the event as well.  “It’s totally outdated,” said junior Ryan Hindlin, co-president of Gay-Straight Alliance. “Since the idea of the Sadie Hawkins dance is so gender oriented, this leaves the gay, transexual, or just non-binary community out of the tradition.”

Despite complaints, Sadie Hawkins remains a popular topic of discussion. “The winter dance usually has an underground-type Sadie Hawkins theme. It’s not official, but some still do it, and others wonder if it is the theme,” junior Fiona Pearl said. While Sadie Hawkins has not been in the past and is not currently a required or official rule for the winter semi-formal, many students still recognize it as a tradition.