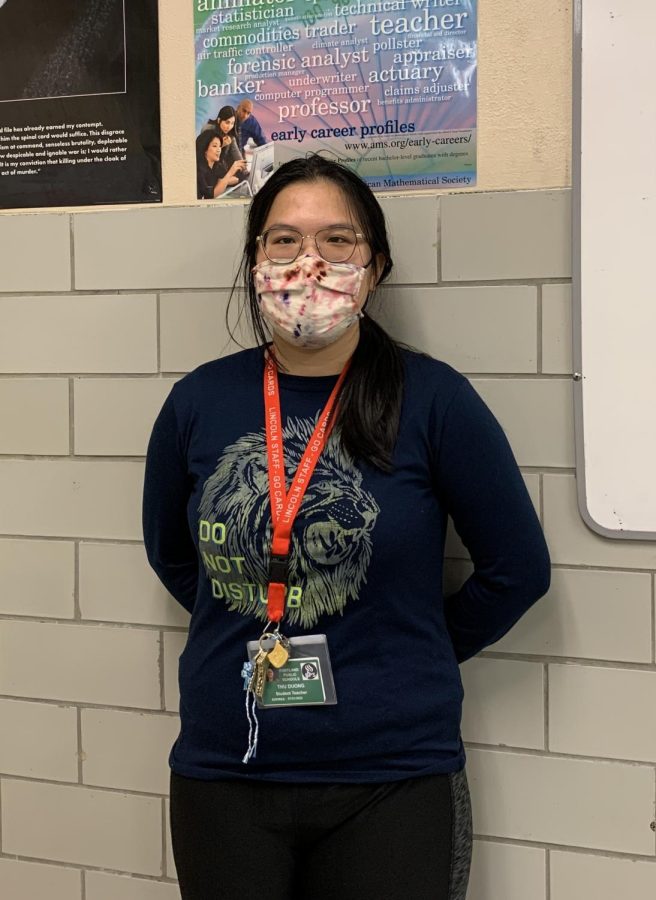 Thu Duong stands in room 6 at Lincoln. Duong has always loved math, and was student teaching in the math department at Lincoln.

When most people walk through the doors of Lincoln High School, they come either to learn or to teach. Thu Duong does both.

Duong grew up in Vietnam, and moved to Portland in ninth grade. She attended McDaniel High School, formerly known as Madison High School, and now she is both a student at Portland State University (PSU) and a student teacher in the math department here at Lincoln.

For Duong, teaching is both what she loves, and a way to connect with her family.

“One of the reasons why I want to become a teacher is … most of my family are teachers. So I have my aunt, a teacher. I have my parents, teachers. I would say it’s become a little bit traditional.”

Duong enjoys teaching at Lincoln because of the community among students and staff members here. She has a number of favorite parts.

“Being in school. Being in class, being around students. Every student has been so nice to me,” Duong  said. “The teachers, the staff are supportive of each other.”

As well as doing her student teaching in math, Duong is also a math tutor at David Douglas High School and Portland Community College.

“I know that I love helping people, especially in math, and I know that math is my strongest subject, since I was born,” said Duong. “I love math. Give me a challenge, I know sometimes I’m not going to get it, but I try, I keep trying.”

In her free time, Duong loves collecting and reading manga, a hobby of hers since fifth grade.

“Every single time, whatever money I bring with me to the manga festival … just miraculously disappears. I remember one day … I almost forgot the money I had to spare for my ticket to go home,” Duong said with a laugh.

Duong is passionate about both her hobby and teaching. Her goal as a teacher is to help students learn to love math as much as she does.

“When they come in [the math classroom], I know that a lot of students are afraid of math. One of the motives is I hope that when I become a teacher, I can help my students to enjoy math more, instead of just [being] afraid of math, or taking it as a requirement for school.”

Note: Thu Duong is no longer doing her student teaching at Lincoln. This profile was written before she announced her departure right before Spring Break.