The rise of Wordle 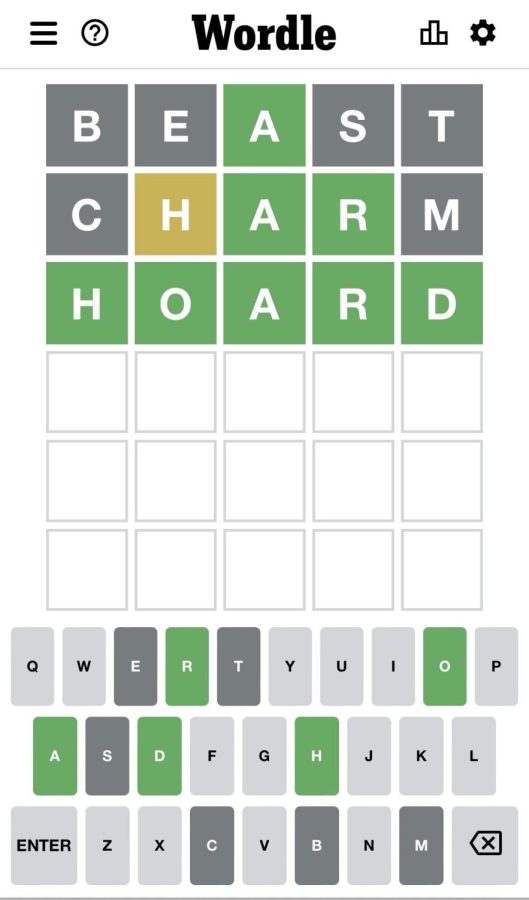 The Wordle from Mar. 7, 2022. The puzzle was originally created for a husband and his wife, but in recent months has become a favored activity for many, including Lincoln students.

In less than six months, Wordle went from a family game to a viral sensation. Unlike most popular games, this puzzle can’t be played with pen and paper. It is solely accessible through a website owned by the New York Times.

The puzzle was created by Josh Wardle, a software engineer in Brooklyn, who coined the name of the puzzle as a twist on his last name.

Wardle’s partner loved word games, leading him to create Wordle, originally for just the two of them. According to the New York Times, Wardle then introduced his creation to relatives, and it quickly became a family obsession. Seeing this spark in interest, he then decided to release the puzzle to the rest of the world in October. The puzzle quickly gained popularity, going from only 90 participants on Nov. 1, 2021 to 300,000 on Jan. 2, 2022, just over two months later.

Wordle functions as a guessing game and a puzzle. The goal of the puzzle is to figure out a five-letter word in a matter of six tries. When participants input a letter that’s in the secret word but in the wrong place, the letter turns yellow. When the correct letter is placed in the right spot, it turns green.

The puzzle is fairly straightforward, as you’re given the entirety of the day to figure out one five-letter word. Even with its simplicity, the puzzle has still managed to maintain popularity for all ages across the world. Junior Roxanne Buehler said she caught on by seeing others play the game.

“I saw a bunch of my friends and my sister start playing it, and I wanted to see what the buzz was about,” Buehler said.

Most Wordle players find themselves coming back to the word game daily, each time a new word is released. Senior Wren Stuart appreciates the digestibility of the game.

“I like learning new vocabulary words, but also how simple they are,” she said. “It is also engaging at the same time, so the simplicity is intriguing.”

The game is also an opportunity for competition between friends. The Wordle community, mostly formed on social media, has come to the decision that cracking the Wordle in three tries is a good score, while four can be considered as average. Wordle players take pride in their ability to discover the word in as few attempts as possible.

“I like how it fosters a competitive environment,” junior Aidan Shuler said. “I always get a kick out of getting the word in less tries than my friends.”

“It’s fun to compare with your friends and you get a new chance to beat them everyday,” she said. “It really is frustrating when they beat me, so it keeps me coming back for revenge.”

The starting word for the puzzle can be a game changer for many players, as it’s important to get the correct letters in minimal attempts. Some players opt to use the same word everyday, most times with lots of vowels like “adieu” or “arise.” Others have read research that analyzes the information theory on Wordle and calculated that “crane” or “trace” are statistically the best words to use.

“I always use ‘crane’ because it has a nice mix of commonly used vowels and consonants,” Stuart said.

Other Wordle players, like Buehler, prefer to keep their playing of Wordle less data-centric and switch up their word each day.

“I usually use starter words with an ‘a’ and an ‘e,’ but I switch my word everyday,” Buehler said. “I think using the same word everyday is kind of lame.”

Wordle has made its way into many of its players’ daily lives. Whether it be when they wake up, at lunch or before bed, Wordle continues to find its way into players’ days.

“I do it in my first period of the day,” Shuler said. “It is a lift to remember I have a Wordle to do as I start my long day of school.”

Whether it is casual or competitive, using the same words or not, Wordle is a game that has connected millions of people, including many within the Lincoln community.

“It brings people together,” said Stuart. “It’s the same word for everyone, no matter where you are.”