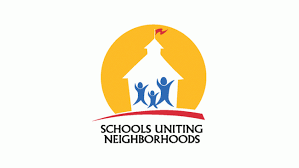 At Leodis V. McDaniel High School, for example, a variety of partners working within the school. Partners work out of a shared community space where students can go for support and access a variety of resources.

Latino Network, an organization that supports Latino individuals, is one of the groups within this space.

“We are all right under the cafeteria, so students have access to see us pretty much all the time. They can drop in, ask the teacher for a hall pass, and come talk to us. Sometimes they just need a safe space to zone out during a hard day at school,” said Edgar Hernandez-Ortiz, an advocate with the Latino Network who works at McDaniels.

Hernandez-Ortiz recognizes the importance of providing support to historically underserved students who may not have had a space like this in the past.

“[We help] them to improve their grades, and, for seniors, we help with college applications and trade schools—just getting them ready for when they graduate. [We want them to] have everything set up for the first year of college or first year trades, or at least to have a career ready,” Hernandez-Ortiz said.

Schools Uniting Neighborhoods (SUN) is another partner within McDaniel. SUN is a non-profit organization that oversees many of the partners, provides meals to students and families and supports educational-based efforts.

“College Possible helps low-income students prepare for college, Jobs 101 helps prepare students to get a job, Passion Impact focuses on volunteerism and social issues, and SUN oversees all of that,” said Julia Shaffner, the site coordinator at McDaniel.

Lincoln Principal Peyton Chapman worked at McDaniel 16 years ago as a vice principal, where she saw the importance of community-based support and tried to gain access to it for underserved students at Lincoln.

“When I moved here to Lincoln High School sixteen years ago, I reached out to those schools and said, ‘Hey, there aren’t any partnerships at this school,’” Chapman said. “They said they really can’t partner with schools like Lincoln because they aren’t racially or economically diverse enough, and they need to focus their support on historically underserved students.”

Chapman was disappointed by this response.

“I was really surprised,” she said. “There are some students here that are houseless, that have financial need; there are some racially diverse students. [But] our percentages aren’t high enough to qualify for any of those partners.”

Lincoln is 65% white, which is substantial in comparison to other PPS schools. However, there are still 300 students who Chapman thinks could benefit from community partnerships.

“I do feel like it is almost even more marginalizing. If you are at a predominantly white school, or a relatively privileged urban public school, then it’s even harder to say you need help—harder to feel like you belong and that the support systems are there for you,” Chapman said.

Lincoln does have a partnership with the Qatar foundation, which funds the Arabic program. There is also strong support for students from Friends of Lincoln.