The effects of Portland’s rise in gun violence 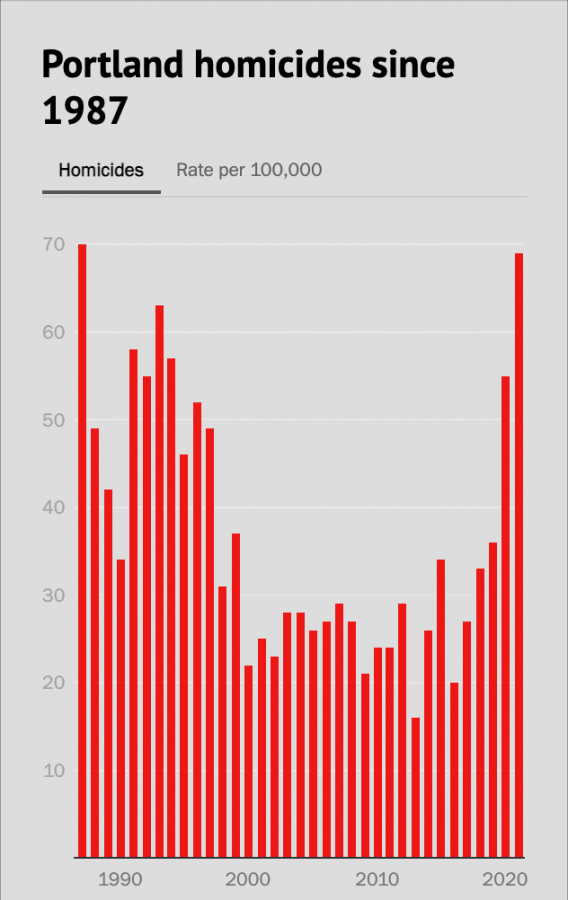 The Oregonian and Mark Friesen

This graph was produced by The Oregonian and staff member Mark Friesen using data from The Oregonian archives and the Portland State University Population Research Center. It depicts the rate of homicides in Portland since 1987, the year with the second highest number of homicides, with 2021 being the first. Used by the permission from Therese Bottomly, editor and vice president of content for The Oregonian.

Violent crimes and shootings in Portland have risen every year for the past five years. This rise in gun violence has spread across the city and has had a direct impact on many members of the Lincoln community.

Stan Caples, one of Lincoln’s campus security agents, is a longtime resident of Portland. Having lived here since his junior year of high school in 1978, Caples has seen rates of gun violence in Portland fluctuate over the years.

“Right now, within the last five or six years, we have entered back in a spot where gun violence is really bad, not only with gang activity, but with police shootings too,” he said.

According to the Oregonian, Portland reached a new record of 71 homicides in 2021, making it the deadliest year in modern history. Caples believes it is up to the government to make the first strides against this rise in gun violence.

Ethnic studies teacher Blair Hennessy agrees that it is up to the city and those with political power to start taking action.

“At this point, any change in our society is going to come from cities making brave choices, and not waiting for the federal government to do something,” she said.

Caples believes that educating people and speaking out is another key component to combating Portland’s trend toward violence.

“All of us need to become educated, especially politicians. They have got to figure a way to come together with the police and get them more training,” he said. “I think as a community, as a city and as a state, we have to use our voices and not be afraid to speak up… because I think a lot of people are just afraid to say things, and then [the violence] just continues.”

Hennessy views gun violence as an issue she can bring to the forefront of her classroom, and she wants to start this important conversation in order to help create change in the community.

“I think for me, as a teacher, I want to get better about surfacing that conversation with young people and hearing from them about what they’re feeling and experiencing,” she said.

“[We need to] listen to communities that are most impacted by the threat of violence, and ask them what they are feeling like they’re needing,” she said. “Now that we’re seeing gun violence impacting white community members, it’s getting more attention. And so again, [we need to be asking ourselves], what does it mean to really listen to communities and to prioritize Black and brown lives?”