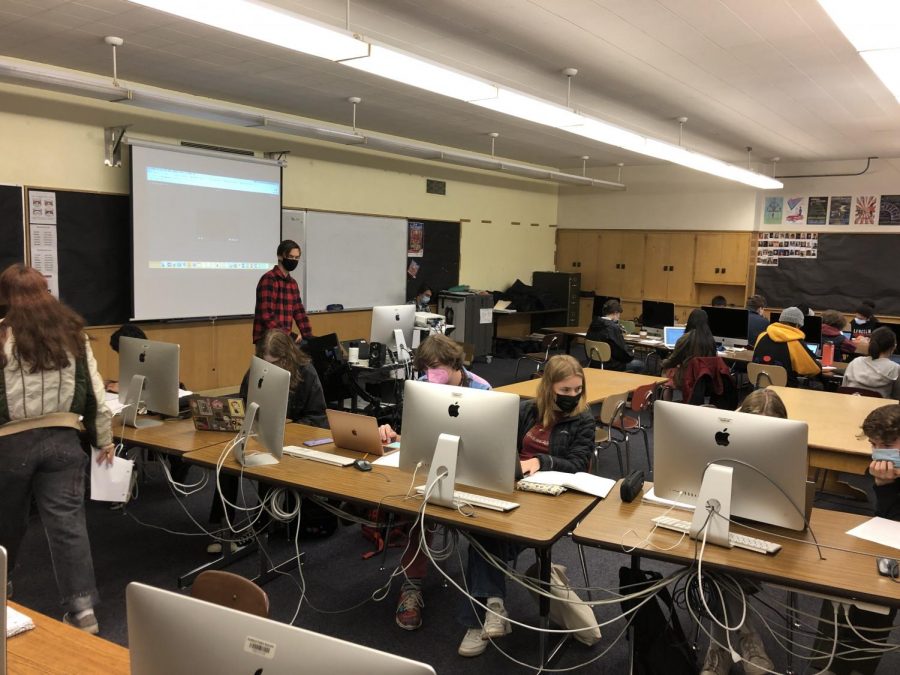 Due to budget and staffing issues this academic year, the IB Film 1-2 and 3-4 classes have been combined into a single period for the first time.

Most class days, while the 1-2 students receive lessons in class, the 3-4 students work on projects in the hallway or off to the side of the classroom. In comparison to IB Film 1-2’s typical class size, IB Film 3-4 only has seven students. Although this new class structure has been hard to adapt to for both the students and the teacher, it was a necessary sacrifice for the class to continue.

IB Film teacher Jordan Sudermann explained the circumstances that led to the decision to merge the classes.

“This year, due to budget, staffing and student population, classes were not going to be run if fewer than 20 students forecasted for them,” said Sudermann. “I felt that merging the classes was better for students who had planned on testing in IB Film than to cancel the class altogether for a year.”

When Sudermann first realized that his classes would be merged, he was disappointed and frustrated but ultimately understanding of why this change was necessary.

“This is not the only class at Lincoln that has historically had fewer than 20 students,” he said, “but I understand that it is difficult to offer as many electives as we do consistently when we have fluctuations in budget and student population.”

The IB Film classes are not the only Lincoln classes that have been combined this year.. Other electives that focus on more niche interests with multiple levels, such as theater and audio engineering, have also been combined to provide for the few students that forecasted.

This new class structure has created some difficulty for the IB Film 3-4 students.

“I don’t think my education has suffered,” said senior Sydney Sallman, “but I know that sometimes I would appreciate more time to be able to talk with my peers. You don’t want to interrupt a class, so you get a little less time one-on-one with the teacher.”

Despite these challenges, Sallman said that in comparison to last year’s struggles of having IB Film online and the prospect of not having an IB Film 3-4 class at all, this new classroom structure is preferable.

“We recently had a group project and it was really nice to actually be able to work with people,” Sallman recalled. “If we have to have two classes at once, then that’s just the way it is. I’m just happy that we can have a film class, because not every high school has that opportunity.”