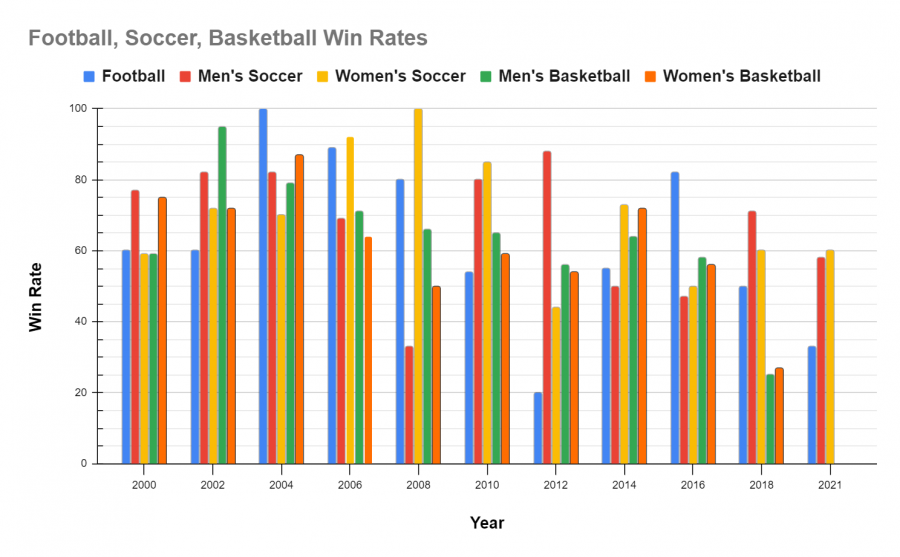 Win rate is calculated by dividing the games a team won by all the one’s played, essentially representing the percentage of games Lincoln has won.

In the past five years, Lincoln’s football, basketball and soccer teams have not found success in the playoffs; however, going further back in history proves this wasn’t always the case.

This year, Lincoln may have only peaked with a men’s soccer quarter finals berth, but since the 2000’s, teams have gone undefeated and made great championship runs to cap seasons off.

Women’s soccer has been the most successful of the three sports, winning the state title in 2007 and 2008. The team never lost a game, which secured the Portland Interscholastic League (PIL) title as well. Other than two outlying seasons, the team stayed consistently good in the following years.

Men’s soccer has also been successful, specifically in 2015, where their win rate (calculated by dividing the games won by the games played) was 88%, securing them a playoff appearance. The team strided to their third finals appearance and won the state championship 2-0 against West Salem, the first in Lincoln men’s soccer history. The team successfully reached the quarter finals this year and Sophomore Reece Fisher helped contribute as the starting goalie. “The [team] did such a good job fighting until the last minute,” said Fisher.

During the 2004 and 2005 seasons, the Lincoln football team had their best season’s in school history, following them up with great playoff success. In 2004, they enjoyed a year without a single regular season loss and, in 2005, they made a championship appearance, where they lost 10-14 against Jesuit.

The next 10 years did not reach the heights the way the 2004 and 2005 seasons did. Several important players graduated, including PIL Offensive Player of the Year Colin Beeson. However, the team came back strong in 2015, when they went undefeated again and made it to the semifinals.

One of the most successful Lincoln teams in the PIL has been women’s basketball, with three league titles since 2000. In 2002 and 2004, they won several PIL-related awards, including First Team All City and the Player of the Year award. However, this never reflected in the playoffs, as the team would lose early both years despite high placements in the standings. Of these years, their best performance in the playoffs was a quarterfinals run.

The men’s basketball team had their best season in 2002, in which they won 95% of their games. This, like the women’s team, didn’t reflect in the playoffs, as they went on to lose in the third round. The following seasons went back and forth in quality. In some, they would have far more games won than lost, while others saw them stay just above the 50% mark.

These three sports only cover a portion of all that Lincoln has to offer. The upcoming winter and spring seasons host many sports which have succeeded in delivering Lincoln more titles, including individual records achieved in sports like swimming. This article has only just scratched the surface of the illustrious history Lincoln sports has to offer.