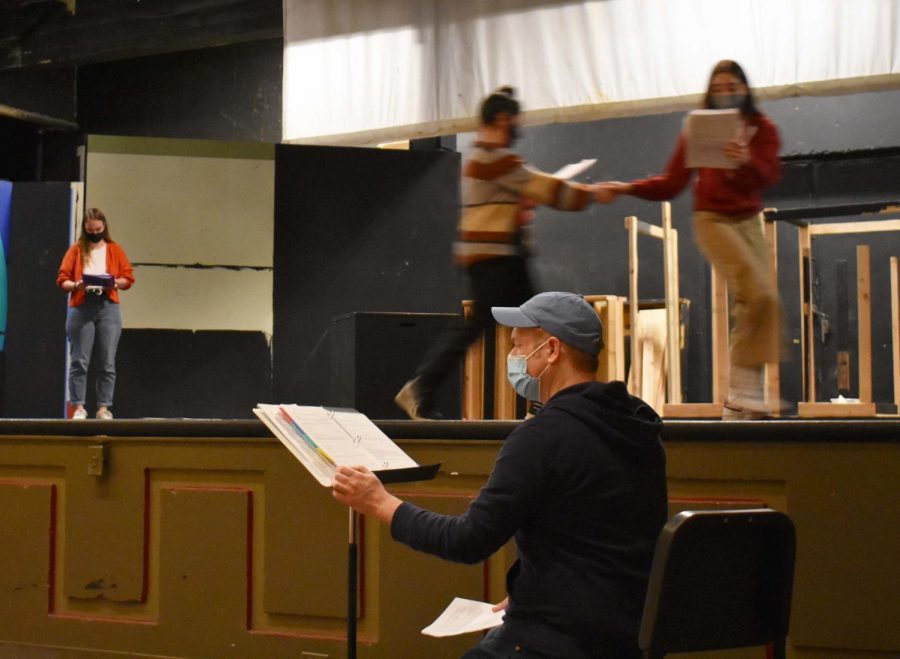 New Works director Matt Zbreski leads a rehearsal for this year’s performance. He has been directing New Works since 2004. Zrebski is also a playwright and composer.

The 18th annual New Works festival, “Out of the Box,” is coming to Lincoln’s auditorium this December. “Out of the Box” features a collection of student-written plays and stars student actors. The performance is brought to life by professionals.

This interview has been edited for brevity and clarity.

How did New Works begin, and how has the concept and the process developed from there?

This is the 18th year of New Works, but it actually began the year before that. There’s kind of a year zero, in 2004. I wrote [a] play and directed it, and so that was kind of the first year. Then it was the next year, for the first annual, that we decided to shift it so that all the students would write, so it really became a student-driven project from the playwriting perspective.

Why did you decide to become a director?

I love collaboration, but, interestingly, I also needed to become better at collaborating. […] I enjoyed the idea of leading something and seeing all of the elements come together, but it wasn’t really a control thing, it was mostly the opportunity to, in that position, work with those various aspects of the theater arts. […] I’ve always had a pretty good skill at taking chaos and making it make sense. I have that kind of organizational mind, so to be able to take that skill and filter it through incredible art with a bunch of beautiful people, it was very attractive to me.

What is your inspiration for New Works this year?

This year was unique. I am frustrated with trying to create theater through COVID safety measures. They are very important, so don’t misunderstand me, but how can we use those safety measures and find an artistic way to create something new, as opposed to trying to force standard theater into the safety measures? […] I went back to the primitive archetypal forms of theater; storytelling through movement, gesture, the Greek chorus. That way we can actually mask everybody in actual theatrical masks, keep them safe, and perform in a different way. And then, with the “Outside the Box” [theme], I love this idea of coming out of COVID thinking about the gifts and the things that are within us, and the idea of something coming out of a box being a metaphor for something coming out of ourselves. […] So this year’s festival is very much about pageantry, ritual, broad gestural storytelling and hyper poetic storytelling, going back to ancient theater when poetry and theater were very much intertwined.

In what ways do you think that New Works this year will be interesting for the audience?

My hope is that they will have never seen anything like this. […] This year, they’re going to walk in and see something very, very different. My hope is that it’s something they can’t possibly get online—not through YouTube, TikTok or Netflix. […] This can only happen this way on a stage. You can’t replicate this. I’m hopeful that, in delivering something so unique, and with themes that are very much about coming of age and the struggle as we straddle between youth and adulthood, […] watching it is still very relevant, but presented in a way that is unlike anything that people have been watching over the past 18 months.