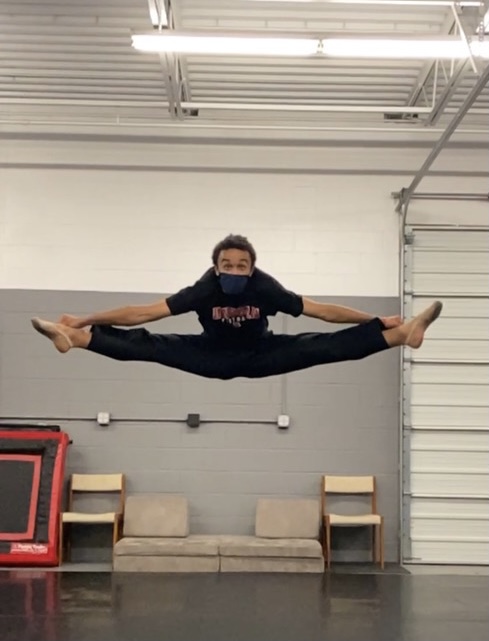 Bishop Murff does the splits at his dance technique class. Murff is currently the only boy on Lincoln's dance team, and the first boy on the team for several years.

According to athletic coordinator Jessica Russell, Lincoln sports teams are very divided in terms of gender. Efforts have been made by Russell and others in the athletic department to diversify commonly gendered sports teams, specifically cheerleading and dance, but male participants are still rare. For example, Sophomore Bishop Murff is the first male-indentifying member to participate on Lincoln’s dance team in the past six years.

Murff started dancing in eighth grade after a recommendation from a friend. He joined the West Sylvan Dance Team before the season was cut short because of COVID regulations. He continued the sport at the start of the 2021-2022 school year.

“In seventh grade, at the end of the year, one of my friends was like, ‘You should do dance, it’s fun,’ so I was like, ‘You know what? Let’s try it out,’” Murff said. “[Dance] wasn’t the easiest thing. Not as easy as I thought it was going to be. But honestly, I still had a decent amount of fun.”

“I don’t really care, to be honest. I just enjoy dancing. As long as I can do that, I have fun with it,” Murff said. “It doesn’t really make a difference to me if it’s girls or guys, it’s just an enjoyable sport.”

Sophomore Ava Gray Russell, who is also on the Lincoln Dance Team, appreciates Murff’s enthusiasm and contributions to the team.

“[Murff] always comes with so much energy and excitement. He doesn’t really care what anyone else thinks,” she said. “He’s just there to have fun and to dance.”

In terms of dance ability, Murff doesn’t think anything is more challenging for him because he is a boy. The only problem he faces is flexibility.

“The only difference that I find is flexibility. I’m not as flexible as [the girls],” Murff said. “I have to stretch extra, but I’m working on it.”

Murff believes the almost all female dance team is caused by a mix of things, but mostly the popular idea that dance is challenging.

“Everybody thinks they can’t dance. When everybody comes in with the ‘I can’t dance at all’ mindset, then they don’t even decide to try,” he said. “It might also be a gendered thing; there are only girls, so other guys might be intimidated to join.”

Murff believes this intimidation is understandable, but should never stop someone from joining the dance team.

“Just [join]. It’s fun. The community is very inviting,” Murff said. “It’s a hard sport, you have to work for it, but it’s rewarding when you see all that pay off.”