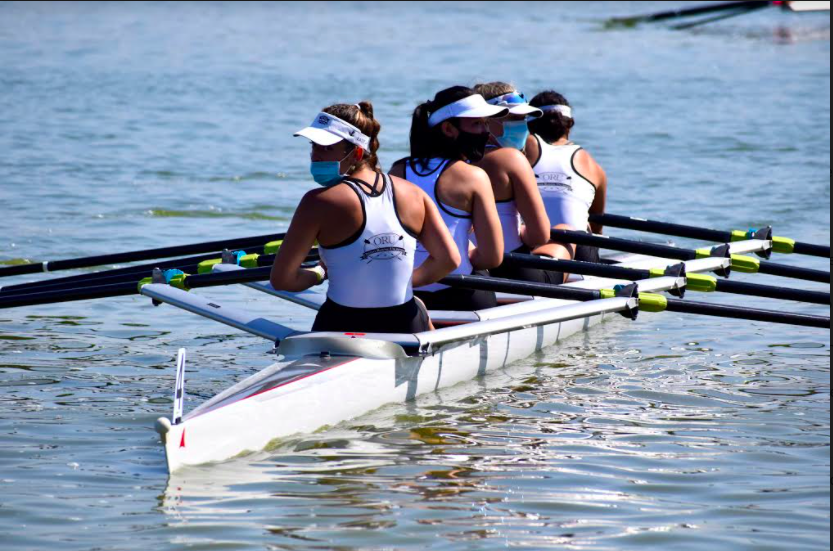 Zoe Scogna, sitting second closest to the back, races with three rowing partners at the rowing National Championship.

Scogna started rowing sophomore year and hasn’t looked back since.

“I started sophomore year as a novice, and that was a little stressful because I didn’t know anyone,” she said. “At first, you don’t know what you’re doing, so it’s hard. I kind of just started [rowing] and now I’m in too deep to quit.” She intends to continue the sport at college, but has not committed to one yet.

Scogna won Regionals with three other people in her quad. They then competed in the National Championship, where they placed third in the ‘D’ final. The ‘D’ final is the fourth fastest bracket, going all the way from ‘A-F’, ‘A’ being the fastest. Though this is only Scogna’s third year of rowing, she is now a varsity rower at ORU.

Scogna and her rowing partners participated in the sculling event, where they raced a 2k (two kilometers) in the U19 division.

“Sculling, is when everyone in the boat has two oars,” said Lincoln Senior Nieka Marais, a member of ORU and a current rowing partner of Scogna in the quad, along with Lake Oswego High School Senior Alex Edwards and Cleveland High School sophomore Lauren Metcalf. “[Sculling] is when you can race singles, doubles, and quads.”

Though Scogna said she felt overwhelmed by the multitude of people competing at Nationals, she still had fun.

“Nationals were fun and scary,” she said. “There were over 2,800 athletes competing from 118 clubs. It’s very overwhelming to think about.”

Scogna also commented on the physical and mental aspects of the sport.

“[Rowing] takes a ton of mental strength compared to some sports. A lot of the time it’s a mind over matter sort of thing,” she said. “Having the motivation to wake up at five a.m. [for practice] during summer takes a lot, and practice is six days a week.”

“[Rowing] is a really mentally-grueling sport because if you give up mentally, then [your race] is over,” she said. “You have your physical limits, but you have to push past them mentally to be fast.”