How much do Lincoln students actually care about politics? 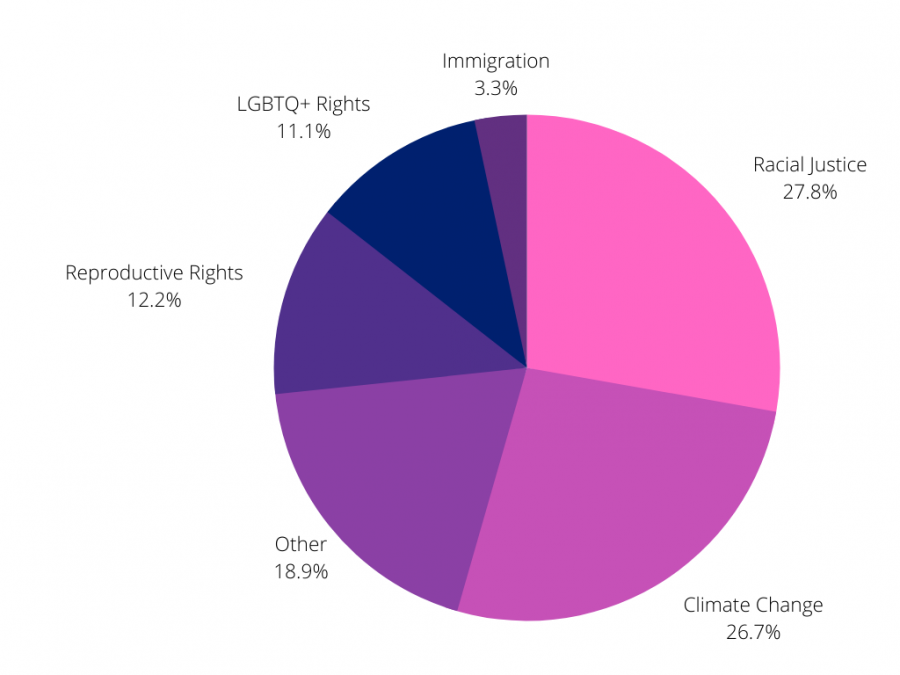 From constitution team to climate strikes, Lincoln students have a reputation for being involved in politics. But is this actually true? The Cardinal Times created and sent a survey to the Lincoln student body in order to find answers to this question. We seperated the results into two categories: by grade and gender.

“That’s a little bit surprising,” freshman Donovan Schubert said, “But from what I’ve heard from my peers in the freshman class no one really talks about politics… they like to keep it to themselves.”

When asked how much they were involved in politics on a one to 10 scale, Lincoln students averaged only a 4.3.

“That’s not very surprising…. right now news is widely accessible and many students have access to look at what’s going on,” Schubert said. “But it’s an extra step to truly get involved.

Iris WeaverBell is a sophomore and a president of the Environmental Justice Club. She had a few ideas about why students might not take that extra step.

“I think the issue is that [students] don’t really know how to get involved,” She said. “There are a lot of political clubs at Lincoln that have a lot of momentum but not a lot of action. I think a lot of teenagers believe in this stuff but they just don’t know how to take action.”

“That makes sense. I feel like [from what I see] on social media, women and girls posted more and were more involved than men [and boys],” sophomore Allie McFeron said.

On the survey, students were also asked to pick the subject they cared most about out of the following list: gun control, climate change, LGBTQIA+ rights, racial justice, animal rights, social security, reproductive rights and immigration. There were also options for “other” and “I don’t care.”

Before seeing the results, some students had predictions about which issues they believed students would care the most about.

“I feel like people [will] care most about racial justice, just because it’s very huge right now,” McFeron said. “Next I feel like people would care about either LGBTQ rights or climate change, because they are [also] very big.”

Texas has been in the news recently for their controversial abortion ban law.

“I think climate change [will be the most popular], since it’s a very general issue for everyone,” Schubert said. “A lot of them, like racial justice, people probably chose if it was more specific to them.”

These predictions were correct, with the leading issue reported by the student body as a whole being racial justice with 27.8% of the vote, followed closely by climate change with 26.7%. Reproductive rights were next with 12.2%, and LGBTQIA+ rights were close behind with 11.1%. None of the other options had more than 5% of the votes.

As for gender, students who identify as male cared most about climate change and racial justice, with 28.5% and 27.5%, respectively. Not a single one said they cared most about LGBTQIA+ rights, reproductive rights or social security.

“Racial justice and climate change are important, but I feel like LGBTQIA+ rights are also very important… and [it’s] a little surprising to me [that no male would vote for it]. I thought they would care about it [the same as other genders],” McFeron said. “[As for reproductive rights], that doesn’t really surprise me… It’s kind of hard for a cis [male] to have a view on that.”

WeaverBell also had thought on this.

“I’ve noticed that [LGBTQIA+ rights] is a very gendered issue,” she said. “I’m not sure why that is.”

Students who identify as female cared most about racial justice, with 24%, followed by climate change and reproductive rights with 18.5% each. None of them cared most about gun control or social security.

“That is surprising. You hear all these stories… I think people identifying as female feel more insecure about their safety just generally being out in the world… it does surprise me that not a lot care [most] about gun control,” WeaverBell said.

Their answers were political corruption, taxes, voting rights and socialized welfare. “People [at Lincoln] are socially aware, but not to an extent where it’s consuming their lives,” WeaverBell remarked, “A lot of people talk about how involved their generation is and honestly I’ve been disappointed since being at Lincoln. I think if politicians and nonprofits make more opportunities available… [political involvement at Lincoln] would increase.”