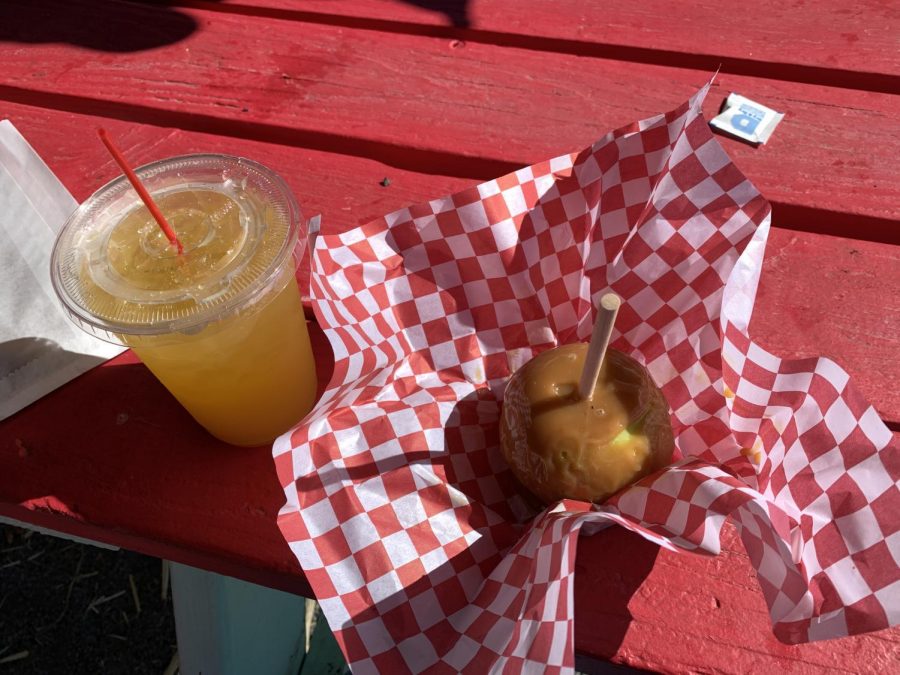 Pictured above is the peach lemonade and caramel apple from Topaz Farm. The food at this pumpkin patch was a perfect mid-day snack.

If you’re looking for something fun to do this season, try visiting a pumpkin patch! Pumpkin patches are a perfect way to spend a fall afternoon with friends or family. You can eat delicious food, pick out pumpkins to carve or even get lost in a corn maze. We visited three pumpkin patches located just outside of Portland and rated each each one out of five stars, based on the following categories:

We have ranked our reviews from best to worst-ranked pumpkin patches.

Laid out over a long, grassy landscape is Topaz Farm, located on Sauvie Island. The large plot of land gives a somewhat crowded day a spread out, safe feel, which was comforting in the middle of a pandemic. There’s plenty of seating areas for everyone, and, in the time we were there, it never felt too packed or overly crowded. Topaz Farm is a U-Pick pumpkin patch just a 22 minute drive from Lincoln. Keep in mind, though, that towards the end of October, traffic to get onto Sauvie Island may be extremely heavy, with travel times ranging from 22 minutes to an hour and a half. It’s closed on Monday, but open from 9AM to 6PM Tuesday-Thursday, and 10AM-6PM from Friday through Sunday. Topaz Farm has everything a pumpkin patch lover could need: good food, a wide selection of pumpkins and a decent corn maze. We went at lunch time hoping to get a meal but were unfortunately met with a confusing menu. It only appeared as though they offered bakery goods and drinks; we had seen people with burgers. Nevertheless, we ordered a peach lemonade, a caramel apple and a chocolate chip cookie, which both exceeded our expectations and were quite affordable as well. We were amazed by how refreshing the lemonade was, which was only $3.50, and the peach flavor wasn’t too overpowering. The caramel apple was a perfect mix of sweet and sour, and the cookie was a great gooey snack. In just a couple of hours, we were able to complete all of the fun activities that Topaz Farm had to offer and were left feeling overjoyed by such a perfect fall experience.

The Pumpkin Patch is also located on Sauvie Island, just a 20 minute drive away from Lincoln. The Pumpkin Patch is open daily from 9am to 6pm. On Saturdays the Maize, Patio Cafe, and Pumpkin Perk Coffee are open until 10pm. This pumpkin patch has an assortment of activities to choose from, including U-Pick pumpkins, a corn maze and an animal barn. There are also food vendors, a cafe and a market. The Pumpkin Patch corn maze was probably the most impressive thing about the patch. It was broken into two parts, which made it easy to stop if you wanted a shortened corn maze experience. One thing that was disappointing, however, was that the food vendors closed at 6 pm, which is not convenient for those hoping to eat dinner. The cafe does stay open after 6 and sells a variety of food, but the line was long and the food was mediocre. The menu was relatively small with the choice of cheeseburgers, hotdogs, sausages, caramel apples and drinks. I chose to order the cheeseburger and caramel apple off the menu. The cheeseburger tasted bland and didn’t  look very appetizing, but the caramel apple was very delicious as the caramel was soft and easy to eat.  The Pumpkin Patch is definitely targeted towards families, with an easily accessible pumpkin patch, cute animals to visit at the barn and a haystack on which to play. Overall, The Pumpkin Patch is a fun, family friendly place to visit this fall.

Bella Organic is another pumpkin patch located on Sauvie Island. Its dog-friendly environment and wide range of kid-friendly activities attracted lots of families with young children. The wide variety of food options impressed us as well. They had everything from kettle corn to gyro bowls. When we first entered the pumpkin patch, the food stalls were the first thing we noticed; however, we weren’t happy with the food. At lunch time, we had hoped to eat something filling, so we ordered a cheeseburger, a caramel apple and an elephant ear. The total for these three small items was $21, which was surprising. Among these, the elephant ear was the only thing that was worth eating, although it was a little expensive and cost us $7. It was the perfect mixture of sugar and dough. The caramel apple and cheeseburger, however, were not as pleasant. The caramel that surrounded the apple looked visually appealing, but was hard and difficult to eat. The cheeseburger tasted cheap, and it definitely wasn’t worth $8. We felt disappointed with the fact that even their smallest menu items were expensive. There weren’t any alternative, cheaper food options, so for people who are hoping to get something to eat there, plan for an expensive meal. The farm is open from 9AM to 6PM from Sunday through Thursday and 9AM to 10PM on Friday and Saturday. Another thing that fell short of our expectations was the corn maze. As individuals who struggle with navigation, we didn’t expect to get through it for at least an hour, yet we finished in under 20 minutes. We could see through the stalks of corn into the neighboring paths, and the maze itself wasn’t well maintained.