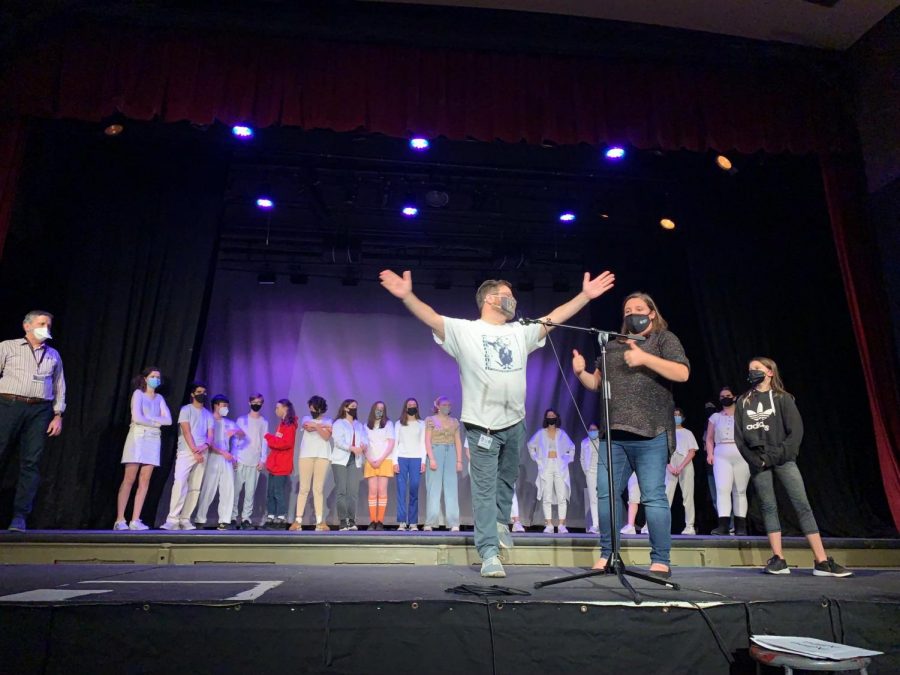 Lincoln students participate in a dress rehearsal for PopCycles. The show will take place this year on October 16th.

For choir teacher Lisa Riffel, PopCycles is a way for students to showcase their talents and come together as a community.

“There was a time when Lincoln didn’t have performing arts ensembles,” Riffel said. “There was not a choir program, there wasn’t even a band at some point, and so PopCycles was that one opportunity for people to showcase their talents. Now, as we do have these really robust programs, it’s an opportunity to both showcase individual talent and these amazing programs that we have as well.”

Last year, when PopCycles became a virtual performance, things looked a lot different. Choir concerts were pre-recorded and edited together to create a video, which was broadcasted for free. Performance exploration skits and student-made plays were recorded on Zoom, with Zoom virtual backgrounds utilized as “sets” and costumes only required from the waist up. Sophomore Ainsley Brown found this discouraging.

“It [was] just not the same without it being in-person,” she said. “You don’t have the same connection and you don’t feed off each other’s energy.”

Not being able to experience in-person performing arts took its toll on mental health as well. With the online environment, some performing arts students lost a fun outlet to reduce stress and connect with others.

“It disconnected me from the arts community for a while,” Brown said. “I kind of lost interest just because it didn’t bring the same sparkle that it used to.”

This year’s PopCycles will not only be Lincoln’s first live, in-person performance since the pandemic began, but also Brown’s first PopCycles performance. She will be performing with her choir and theater classes, as well as performing as a member of chamber choir. She’s also put together a solo act with a group of sophomore and junior students.

Another Lincoln student involved in PopCycles this year is junior Allison Khalil. Khalil is the publicist for the drama cabinet, and will be hosting the event with her fellow cabinet members.

“I’ve always been on the outside of all the planning [for PopCycles], so it was interesting to see how everything comes together,” Khalil said. “There are a lot of different components to making sure everything is in order.”

Khalil was able to experience an in-person PopCycles performance as a freshman prior to the pandemic.

“My first year was really fun because there’s something about being in the atmosphere and seeing all of the performances live rather than a recording that’s really special,” she said.

For Khalil, both PopCycles and the performing arts program in general have had a major impact on her life.

“I’ve found that it’s been a really great outlet to express myself and also to bond with people around me to form a great community,” Khalil said.

“The performing arts has given me a community to feel welcome in and to challenge myself to do things that I didn’t always think I could do in,” Brown said. “PopCycles, too, has really improved my confidence and brought me closer to a lot of people that I didn’t know originally.”

With the performance right around the corner, excitement and anticipation is increasing.

“I’m excited to see the community come together, to see the students singing for an audience instead of just for a camera, and to see the audience experience being in [the auditorium] again watching their kids, or their friends or the students at Lincoln shine,” Riffel said.

The performing arts community hopes that this year’s PopCycles will be appreciated.

“It’s kind of a momentous thing,” said Riffel, “to have a live show again after a year and a half online.”