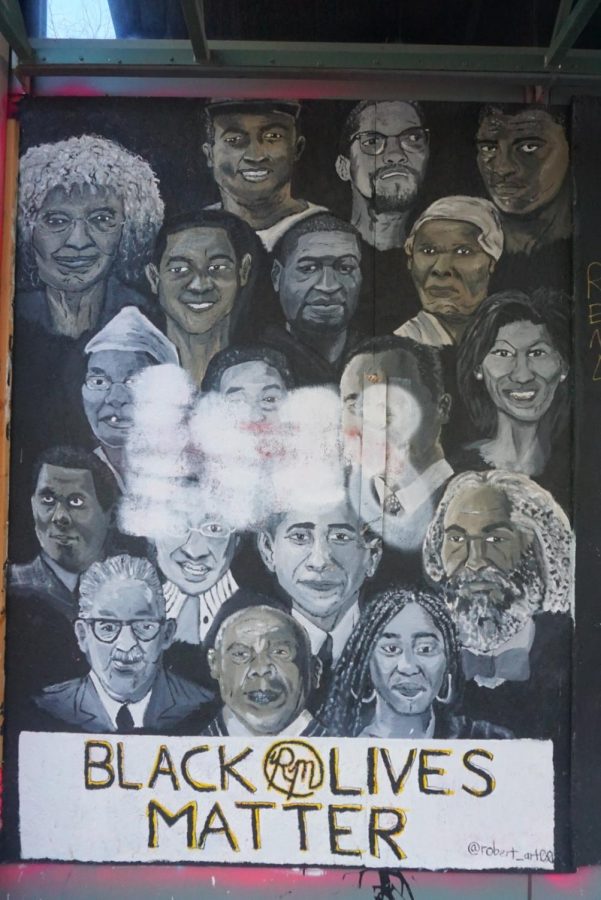 The faces of 18 Black activists fill the walls of Pioneer Square. Artist Robert McKizzie has taken to the walls of Downtown Portland to express his views on the Black Lives Matter movement.

The faces of 18 Black activists and change-makers fill the walls of Pioneer Square for passerbyers to ponder and reflect upon. Behind the powerful mural is Robert McKizzie.

Mckizzie, who has lived all over the United States, says family and art are essential to who he has become.

“I grew up with very little except my family. No matter what situation I’ve been through, I’ve already had that and art. Art has been the one thing that constantly has inspired me as well as challenges me to do extraordinary things in my life,” said McKizzie.

McKizzie’s passion for artistic expression started at a young age when he began to draw his favorite characters from television shows.

“I’ve been doing art as long as I can remember. I was always drawing my favorite characters, from Batman to Darth Vader. Such are the joys of any child’s life,” said McKizzie.

This childhood passion soon led to personal sparks of invention and creativity, molding McKizzie’s interpretation of art and its symbolic nature.

“Over the course of my art career I eventually started branching out into other media on my own,” McKizzie explained. “I enjoy illustration art or [art of] people because of how complicated the human is by design as well by traits that define who a person is. The visual representation of what someone stands for.”

More specifically, the message of protest art is important to McKizzie. To him, it is another way of storytelling.

“Protest art means a lot to me due to the fact that an image can say more than words itself. Though not necessarily direct, [that] doesn’t mean that it isn’t important compared to a speech or action,” he said. “Art is a part of all our lives. And if a piece is done well, it can grab someone’s attention by accident. Art is more important than people think when sharing an opinion or ideal.”

This summer, McKizzie took to the walls of Downtown Portland in an effort to express his views on Black Lives Matter, a movement that has allowed him to voice his frustrations.

“Black Lives Matter is something new to me to the extent of being involved. I got involved with Black Lives Matter to have my voice heard of my own frustration with what has happened recently and what has been going on,” McKizzie said. “I believe that every voice should be heard, even if it’s something that isn’t as strong as going out and protesting.”

McKizzie was able to begin his mural after Expression Against Oppression (EAO), an organization started by Salomée Souag, a Portland muralist and creative, to use art to uplift individuals and fight against prejudice, lent him a space to paint on.

“I was able to get the space from… EAO that was put together [for] African American artists who felt the need to express themselves with everything going on,” McKizzie said.

With the space for his mural secured, McKizzie got to work painting the faces of notable Black individuals, from athletes to politicians to poets.

His mural is inspired by strong Black leaders that have fought for freedom in this country, paying homage to their brave efforts.

In a quick glance of his mural, you might spot the faces of Barack Obama, Angela Davis,  Malcom X and Thurgood Marshall, among many others.

“A few faces I chose were of course Barack Obama, due to the fact that he was the first Black president in American history, and a true inspiration to all sorts of people. Harriet Tubman, not only a powerful African American, but a powerful woman, who also represented strength and perseverance through hardships and the many challenges she faced,” McKizzie explained. “I also grabbed athletes from Jackie Robinson to Muhammad Ali to be put into it, as these were people who were overall respected by everyone to a certain extent. And of course the souls we lost, such as Trayvon Martin and most recently George Floyd, to honor the souls we lost.”

McKizzie hopes that individuals will see both the accomplishments and tragedies of the African American community in his mural.

“I hope that [people] see the history of all the lives I’ve displayed so people can look at the loss and the success of [Black civil rights] movements,” he said.

For other young artists, creatives or aspiring change-makers, McKizzie has some advice.

“The biggest thing that helped and pushed me, is to follow your heart and challenge yourself. Be true to yourself and your intentions of what you want to accomplish no matter what it is,” he said. “Make decisions, whether they are poor or good, [and] with every choice you make, it will lead you closer to clarity to channel whatever it is that is inside of you to come out and express yourself. Even if they don’t affect others, it is good to invest in yourself. Further leading you to do extraordinary things.”