Students and teachers make the anticipated return to in-person school 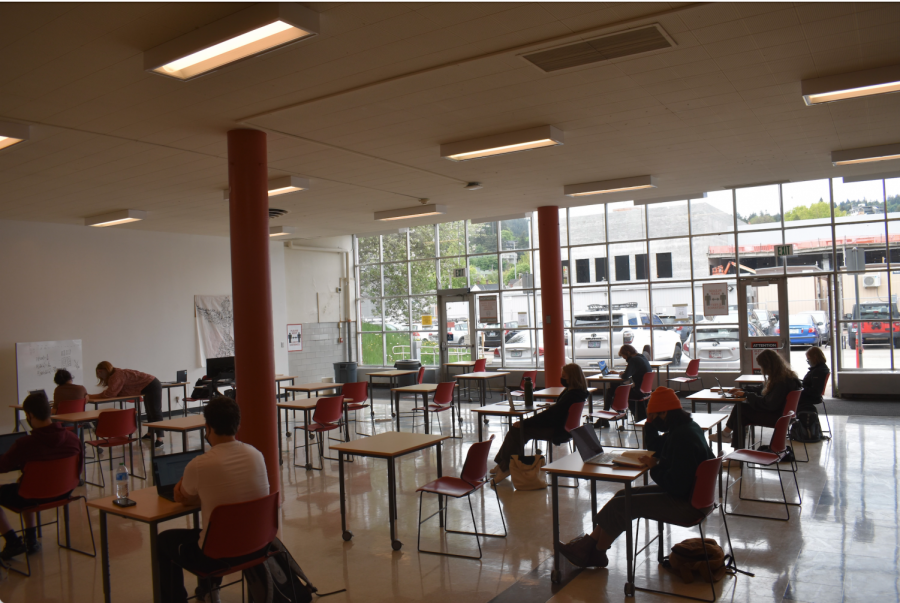 Students sit in the Lincoln High School Cafeteria during a period of hybrid learning. April 19 marked the first day of in-person learning since March 13, 2020, ending over a year of distance learning.

On Monday, April 19, students began returning to school for in-person learning. For most students, this was their first time inside the Lincoln building since March 2020.

Walking through Lincoln’s hallways, taking trips to Westside Market and merely sitting in a classroom became memories of the past during online school. After several months of Comprehensive Distance Learning (CDL), wearing pajamas all day, waking up minutes before class and being put into awkward breakout rooms became students’ new normal.

Before the pandemic, home is where many students would return to after a long day to relax. Over the past year, home has become a workplace. Without the separation of where you work and where you relax, it has been extremely difficult for some students and teachers to stay focused and motivated.

“I was starting to hit a wall, teaching in my apartment everyday,” said Bestor.

Similar to Bestor, sophomore Elliott Walker said that being at home all day became tedious.

“It felt like all the days were just mushing together,” said Walker.

Now, with the hybrid learning schedule, mornings stay the same with CDL, but in the afternoons, some students come into the building for in-person learning.

After 402 days of online school, in-person instruction is a positive change for many teachers.

“It’s given me a lot more energy,” said Bestor. “I feel like it’s making me a better teacher, because I get to be back [in the classroom] with some students.”

Returning to in-person school has also been a turning point for students.

“I’m not very good at working at home, so to be able to go to school, it gives me an opportunity to really get work done,” said Walker.

Although the return of in-person learning may bring a sense of normalcy, strict protocol and guidelines such as formal check-ins, signs and directions on floors and walls, and sanitizing stations are put in place. Returning students and teachers are required to wear masks and maintain social distance at all times. Social distancing can sometimes be hard to maintain.

Bestor noticed how this plays out during passing time.

“I think the one challenge spot we run into is the hallways, and we don’t really have a lot of control over that,” said Bestor.

“Given the sort of flow of students leaving class and having 10 minutes to transition… it’s impossible, basically, to have it where every student is six feet apart,” he said.

“The district’s policy of when something becomes a cohort is 15 minutes of being in the same space as someone else. Since passing period is 10 minutes long, it’s underneath the threshold where the district says it should be a concern,” Brida said.

Before returning to in-person learning, students took a survey regarding hybrid learning.

“That survey told us how many cohorts we thought we could have,” said school business manager Jill Ross.

According to the survey results, just under 70% of students said that they would participate in hybrid. PPS guidelines limit students to a maximum of 100 interactions each week. By having two separate cohorts, this guideline was met, but also caused changes to schedules.

“You only get to see your students [in person] every two weeks, which is a bummer,” said Bestor.

This is a big difference from typically seeing your teachers two to three times each week, which was the normal pre-pandemic.

Another difference with hybrid learning is classroom sizes. Before COVID, a classroom could be filled with over 30 students. Now, the number of people allowed in a classroom is much smaller.

“My political economy class was me and three other kids,” said Walker.

The introduction of hybrid learning and the return to in-person school generates hope moving forward.

“It takes a village,” Brida said. “It was a team effort between everyone.”