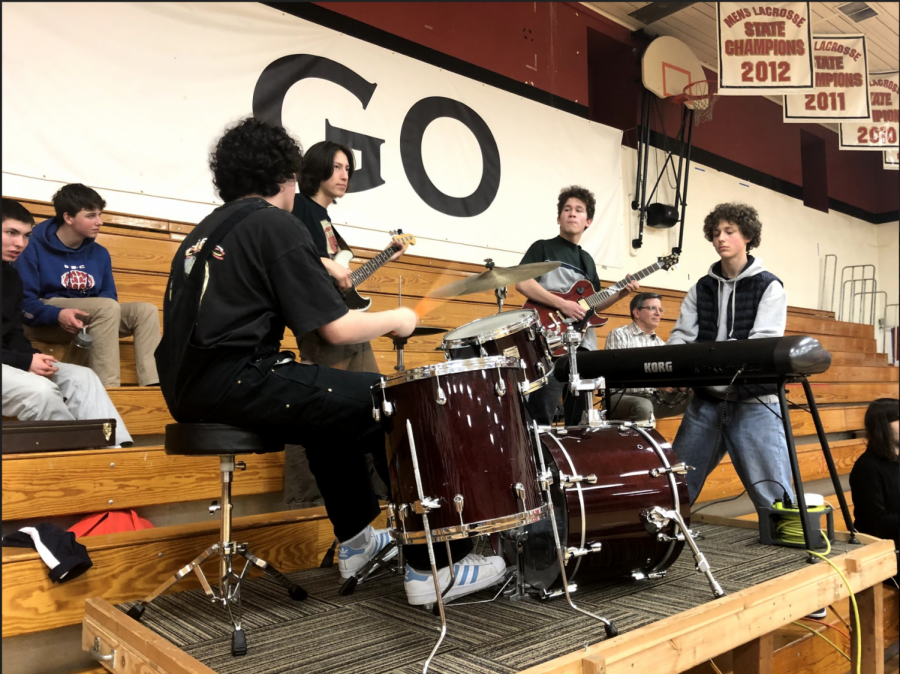 Five Lincoln musicians share their experiences and about about how music has impacted their life.

From consumption to production, music plays a large role in the lives of students at Lincoln.

For senior Mack Ashbaugh, who sings for Vivace, Lincoln’s acapella group as well as the Lincoln choir, music was a way for him to connect with other students and find his place in high school.

“When I first came to Lincoln, I joined choir, and that really helped me feel comfortable being at Lincoln,” he said.

Katie King, a sophomore and singer/guitarist, also found her place in the music community.

“The artist community at Lincoln is very welcoming and really kind,” she said. “I’ve only had positive experiences with everybody in my [Cardinal Choir] class.”

Students say music can also be a stress reliever.

When Ashbaugh was on a hockey team where he faced bullying, music helped him work through with it.

“I didn’t really know how to deal with it [the bullying] and I found music. It was really like therapy to me, it helped me find balance in my life,” he said.

That balance has also served as a  help to people who simply want to get things off of their mind. For King, music is a form of expression.

“[Music is] a really great way to communicate how you feel,” she said. “That’s the way I communicate [my emotions].”

Senior Carson Nitta, a bassist in the school jazz ensemble and for Salad Water, a local band, also uses music to connect with people.

Similarly, connection drives the passion of some singers to keep performing and inspiring others.

“I always like to see somebody be affected in some way by a song I’ve written,”  senior Atharv Bhingarde said about when he performs his original music.

By using his own life as an inspiration for the music he writes and sings, Bhingarde can bring back memories and connect to his audience.

For rapper and musician, senior Caleb Dickson and Ashbaugh, being so passionate about music has truly influenced who they are today.

“I feel like [music is] my entire life,” Ashbaugh said. “I wouldn’t be where I am without it.”

Even when passionate about something, things can easily get in the way. For many young artists, school is a barrier.

However, creative activities such as writing and performing music does not always come easy, Ashbaugh finds it’s difficult to juggle school and his hobbies too.

“Having to balance hockey– which I play seven days a week– with music– which I practice every day too– and then with school… it’s very hard,” said Ashbaugh.

Being a musician for some entails writing as well as performing, but writing music can be very challenging. For Dickson, his creativity can come and go while he writes.

“My writing process is very interesting sometimes. There will be days… where I’m not trying to write right now, other days it’ll just come to me,” he said. But when he has a strong idea, it’s easier, “I just get inspired and when I do I just have to really get in the zone… I just turn everything off and I’m like, ‘today I need to write.’”

When it comes to their future, Lincoln musicians have different plans for where music will take them.

Nitta, doesn’t plan on attending music school, but will continue to share his passion for music with others.

“I will definitely be taking classes and trying to meet people [in college] who also share my interests, and maybe even start another band wherever I go to school,” he said.

Meanwhile, Ashbaugh knows exactly what he wants to do with his life, and that’s becoming a professional musician.

“I refuse to not let it happen, he said. “I think that one of the ways a lot of people don’t make it [is that] they doubt themself, [but] I don’t doubt it at all. I’m going to become a professional and that’s the only thing I want to do with my life.”

Dickson would also love to have a future career in music.

“I would love to continue on and learn more and just create music in general,” he said. “If that’s where my career takes me, that is just a blessing.”