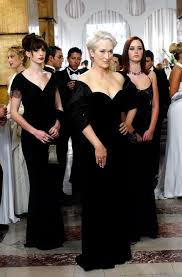 The Devil Wears Prada is an American comedy about the fashion design world.

The Devil Wears Prada, released in 2006, is always on television. Watching it raises the question of how we should approach older movies that don’t fit into today’s standards of inclusivity. The film is filled with sexist messages about women, their bodies, and the expectations around being a female. A better way to watch outdated movies like The Devil Wears Prada is to watch them through a critical lens.

The excellent acting makes the movie entertaining. Actress Anne Hathaway plays Andy, a newly hired assistant to the editor of Runway magazine. Miranda, the editor of Runway, is played by Meryl Streep. Andy is called “fat” by Miranda. She starts the movie as a size six and ends as a size four. The film never challenges the idea of losing weight to fit in.

A theme throughout the movie is that women don’t support each other.  Andy has no female allies at work. A competition between Andy and Emily (Miranda’s other assistant) begins with no real motivation. Her only friend at Runway is Nigel (leading fashion authority at the magazine). It’s frustrating that Andy is surrounded by females, yet the only person who wants her to succeed is a male.

Miranda comes across as evil in the film. Other characters go on and on about how she is unreasonable and unpleasant to work with. I wonder if she would be considered mean, bossy, and aggressive if she was a man? Or if she would just be doing her job?

Eventually, viewers learn that Miranda is having marital problems and isn’t entirely as tough as she is made out to be. Towards the end of the movie, she is supposed to be replaced by a younger woman. This part of the movie communicates the idea that getting older affects your ability to be stylish and “on-trend”. Executives think Miranda doesn’t look and fit the part of the elegant, perfect, trendsetting person who should be working at Runway, ironically the same message Andy received when she first began working there.

Though the other aspects of the movie are commendable, the overall messages this movie presents is insupportable in today’s world of body positivity, women’s rights, and the overall encompassment of empowerment.  However, when watching dated dramedies for entertainment, I suggest looking at them through a critical lens, because it gives them more depth and makes them more interesting and relevant in the year 2021.