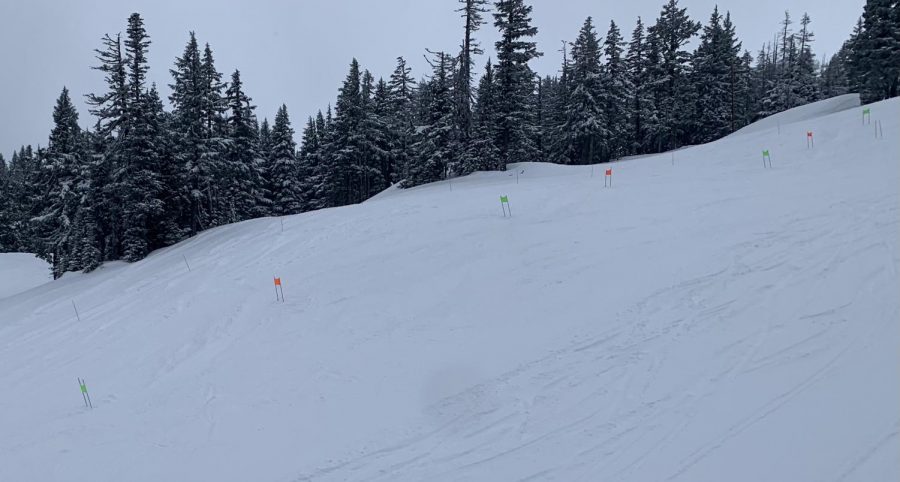 Ski team practices on the giant slalom race course on Wednesday the 27th (on easy rider at Mt. Hood Meadows).

Despite COVID, Lincoln skiers are still getting out on the slopes to race.

The 2020-21 winter ski season has been severely abbreviated due to COVID-19 restrictions.

Because of the coronavirus, the amount of people who can be at Mt. Hood for races has been reduced significantly compared to previous years.

“There can be only a maximum of 50 people at each race, so races like the Kelsey race, which is a friendly race, where every team from the Three Rivers League gets together for a memorial race for Kelsey Hewitt to start off the season, can’t happen,” said Lincoln High School and Catlin Gabel racing coach, Robin Chapin.

This year, the Catlin Gabel and Lincoln teams have combined to practice and race together.

Khunis has noticed the amount of people on the team who regularly come to practice compared to last year has decreased.

“Last year, there would be anywhere from about 20 to 25 people coming to practice. This year, only about ten or so people combined from both Lincoln and Catlin Gabel that actually routinely come to the practices,” said Khunis.

Chapin sees a bright side to the decrease in the amount of racers because it’s an opportunity for the racers to get more practice.

“Because there are a lot less people this year, it allows us to really focus on the racers that are still left. The racers can get more runs in practice, because there are less people running the course, and so that is less time they spend waiting around for other people to run the course before they can go,” said Chapin.

According to Chapin, in previous years, the Lincoln ski team had a bus to transport the racers to practice after school on Wednesdays, and there was a carpool system on race days so all racers could attend every race, regardless of if they had transportation or not. This year, there is no bus, and racers must get a ride from their parents to attend practice at 2 p.m. on Wednesdays, or they must get a ride from someone else’s parents on the team, but they must be in a pod with them. Racers also did this for the race day on January 21st, and will do it again on the second and final day February 12th, both with two races within each race day.

Khunis said that she felt nervous before the slalom race that was held January 21st due to the lack of practice that was available to the racers.

Though ski racing is very different from what it was last year, Kunis is still happy to be able to race in any capacity.

“I didn’t think that I would be able to ski race at all this year, and because I can, I am very grateful,” said Khunis.