Lincoln sports back in session 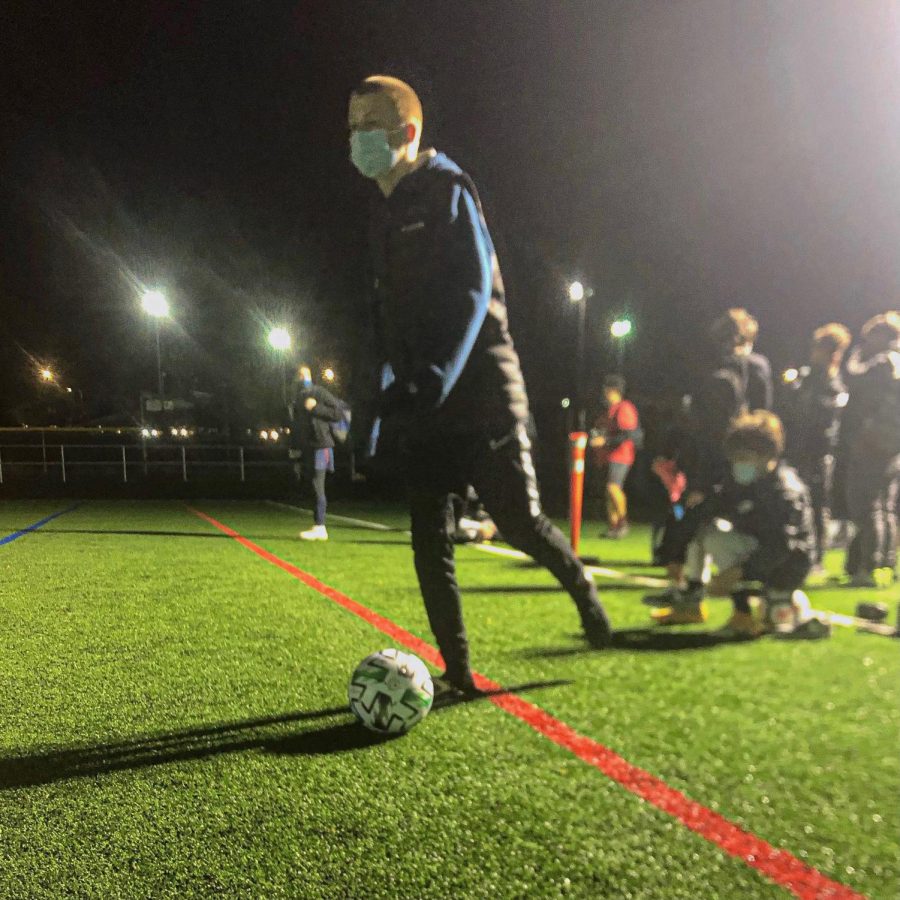 A Lincoln athlete makes a kick during soccer practice. Practices started up again this fall, with several restrictions in place to limit the spread of COVID.

After over seven months without sports practices, training camps finally got Lincoln athletics back underway this fall.

The training camps, which are a series of practices for Lincoln athletes, began in late October and are currently still running.

Sports teams have held practices at different sites such as Jackson Middle School, Rieke Elementary School and Wilson High School. Safety precautions that have been implemented during the practices include wearing a mask at all times and completing a health check consisting of a survey and temperature reading before attending each day.

“I was at first feeling excited because soccer is a sport that I love so much, but I was also a little skeptical about how it was going to work [with] the safety precautions,” said Lea.

As Lea attended more practices, he became more accustomed to training during COVID.

“I have been really impressed with the safety protocols and I feel very comfortable in the [training camp] environment,” Lea said.

Not only have the practices been safe, said Lea, but also beneficial in multiple ways.

“It was great to be able to improve my skills and get to know a lot of my teammates better,” he said.

The success of the training camps has depended on how Lincoln’s coaches manage the COVID restrictions. Lea said that the soccer coaching staff has excelled during the practices.

“Head Coach Pablo Dipasquale has done a really good job managing the camps while keeping us all safe,” said Lea. “And personally I have really enjoyed my interactions with Coach Scout Libke; she makes you feel like you have known her a lot longer than you have.”

The practices have also come with some inevitable challenges. Playing with masks on has been difficult for most of the athletes and Lea is no exception.

“It really is not easy at all, [the mask] limits your breathing a lot,” said Lea. “But honestly I think it’s going to train me better for the future.”

The different way of interacting between teammates has also been something athletes have been getting used to. There are no more high-fives and hugs, but Lea said the changes in teammate interactions have not been that hard to get used to.

“It’s definitely a little awkward, but [the other players] still have a similar vibe with each other and we are all just happy to be out there,” Lea said.

Like Lea, another athlete who is happy to be out practicing is freshman baseball player Ben Swank.

“I have been really excited to get out there instead of sitting in my house all day,” said Swank.

As a freshman, Swank has become acquainted with the Lincoln baseball program under very unusual circumstances. His integration into the team has flowed fairly well even with the COVID restrictions.

“I totally think I have been able to introduce myself into the program and start making good relationships, even if it is a different atmosphere,” said Swank.

Swank is grateful for the resumption of practices, but he still greatly misses baseball before COVID-19. He especially misses the ability to spend time with teammates without restrictions.

“You can still talk with [your teammates], but actually hanging out and getting in the dugout with them is way different,” he said.

COVID has presented many challenges and the Lincoln training camps are not immune to those setbacks, but overall the practices have proven safe and beneficial to everyone involved.

“[Training camps] have given me something that I have been missing for a long time,” Lea said.