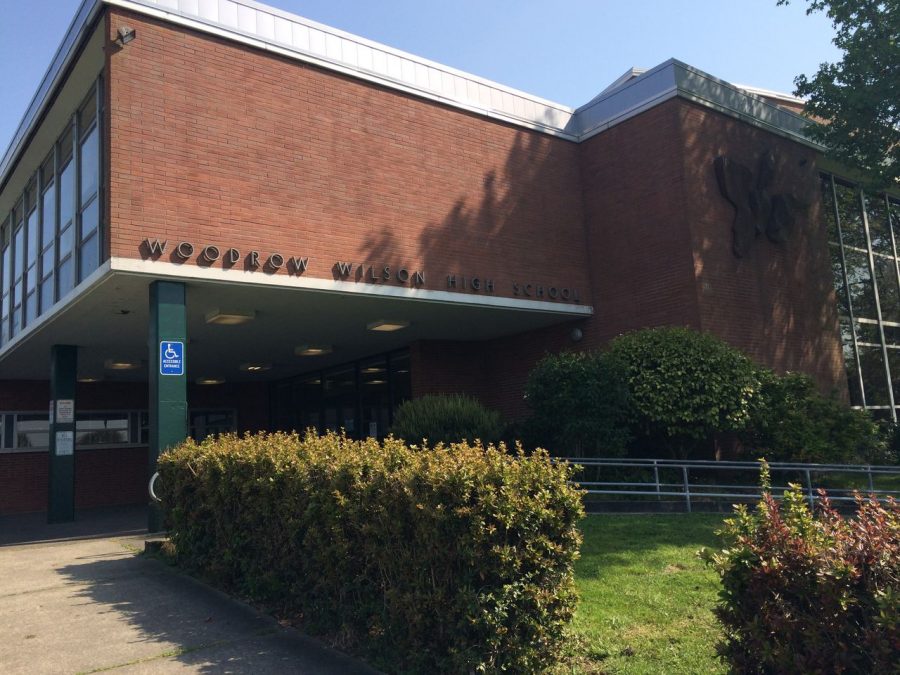 Betsy Hammond, courtesy of The Oregonian

The outside of PPS' Woodrow Wilson High School. Over the past year, the "Renaming and Redefining PPS Spaces" project has been working to find a new name for the school.

This year, PPS has started to take part in a project they are calling, “Renaming and Redefining PPS Spaces: Centering the Experience of Black, Native, and Students of Color Through A Racial Equity Design Process.”

“The first step toward changing the climate of this high school is by changing its name. We can’t hope to be an anti-racist environment when our namesake was pro-racist,” said Wilson High School junior Nura Salah.

All nine high schools in the Portland Public Schools (PPS) district are named after past leaders of the United States, almost half of which were slave owners. When these schools were founded in the 19th and 20th centuries, their names did not appear problematic to the public eye. In fact, they were thought to be honoring leaders of our country. Today, the true stories of these controversial figures in American history have been revealed, and are much more questionable than the PPS schools’ founders originally believed.

The renaming and redefining project is focusing first on Wilson High School, which PPS intends to rename in order to help dismantle systems of oppression in the education system. Students and staff at Wilson have been attempting to rename the school for the last few years. The current project finally got its start this year after the protests sparked by George Floyd’s murder in the spring.

President Woodrow Wilson, the school’s namesake, allowed segregation in federal positions. He also threw civil rights leader William Monroe Trotter out of the Oval Office in 1914. Additionally, after his appointment, Wilson fired 15 out of the 17 total African American supervisors in federal office, replacing them with white people. To continue the hiring of only white people, the federal government started requiring photographs with job applications in 1914. Wilson was also sympathetic to the Ku Klux Klan, describing them as “men half outlawed, denied the suffrage, without hope of justice in courts”, and playing the movie “Birth of a Nation,” which glorified the KKK, inside the white house. Additionally, Wilson rejected the racial equality clause at the Treaty of Versailles.

“The short of it is that Wilson [was] not a person who embodied the qualities and aspirations that we have as a school, particularly with regards to creating an inclusive, supportive community where all students regardless of race, gender, religion, etc. feel welcomed and safe and supported,” Wilson Principal Filip Hristic said.

The school’s aim is to “educate young people in every capacity-mind, body and spirit.” Since last June, students and teachers have gathered over 6,000 signatures with the aim to change the school’s name.

The project is run by a committee of eight students and eight adults, including Hristic and a PPS official. This group was selected anonymously out of 120 people who applied in an effort to make the committee as unbiased as possible.

Nura Salah was one of the eight students selected.

“As a Black, Muslim student going to a predominantly white school, I have always felt out of place and have known the education system wasn’t built for people like me,” Salah said. “But one thing I can do [on the committee] so less people experience that negativity, is aid in stopping the normalization of discrimination and racism at Wilson.”

Salah contributes to this cause through each of the group’s meetings.

“Committee meetings are primarily student facilitated, each week is led by a different student following an agenda,” Salah said. “Currently, we are sifting through the names that were recommended to us through the Google Form we sent out and using that as reference for the names we pick as top contenders. We are also researching what those people stood for and making sure their values align with our own.”

The roles that adults– such as Hristic– have in the committee are much more passive than those of the students.

“My job is to help facilitate conversations, help people find their voice and make sure we are all equal,” Hristic said. “Part of my job is also to share from my perspective as a principal, so there are times when I’m a neutral party and then there are times when I need to talk from where I sit.”

The committee has been working hard to find an alternative name and should be coming out with a final decision later this month. As of Dec. 15, there are five names that are in the running. All of them are honoring Black women who have made a significant impact in our country. The five women are as follows: Harriet Wilson, Ida B. Wells, Sojourner Truth, Mercedes Deiz and Beatrice Morrow Cannady. The community will choose from these five later this month, finally giving the school a more equitable and inclusive name.

“I want all students to enjoy learning and feel that school is a safe place,” Salah said. “That won’t be accomplished until we pick a namesake that truly upholds our principles of righteousness, justice and compassion.”