Changes to Cardinal Choir a success for online school year 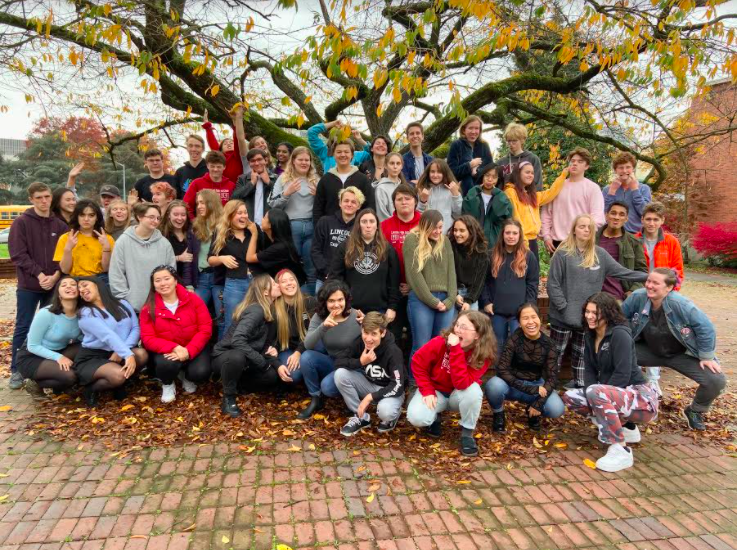 Despite the setback to the program due to COVID, the Cardinal Choir saw the transition to online learning as an opportunity to speak out on issues regarding race, specifically the Black, Indigenous and Person of Color (BIPOC) community, through videos.

Lincoln’s Cardinal choir went through many adjustments during the summer of 2020 in order to make it work without members having to meet in person, causing choir students to adapt to a completely new format.

“Our choir teacher, [Lisa] Riffel, has done a great job of adapting the class to an online situation, but there’s not really a good way of making choir work online,” said sophomore Lief Olsen, accompanist of the Cardinal and Freshman Leadership and Inquiry (FLI) Choirs.

According to Olsen, there are certain fundamental elements to choir that cannot be present in an online format.

“An important part of choir is the in-person connection when singing with each other, and that’s really lacking this year,” she said.

Sophomore Kylee Wilkinson, a soprano for the Cardinal Choir, agrees.

“Choir is so different this year since it’s usually such a collaborative thing,” said Wilkinson. “It’s hard when you don’t have the ability to rely and go off the other choir members when singing.”

Though the transition to online choir was a difficult one for Olsen and Wilkinson, they managed to find enjoyment in a new program that Riffel has provided for her class.

“Now that we are online, choir is a place for students to sing, but in a new format,” said Riffel. “We have a program called BandLab where students record their voices, and then we layer them with other voices to create performances for audiences, and then we found visuals or took video footage  to go along with our performances.”

Olsen had a generally positive experience with Bandlab and online performances.

“It can be hard to look engaging in front of a camera, but overall the videos are a fun experience,” said Olsen. “It’s really fun to see the final product afterwards too.”

“It’s so fun to see the final project when it all comes together,” she said.

One of the choir’s performances is of the popular protest song (also known as the Black national anthem) “Lift Ev’ry Voice and Sing,” written by J. Rosamond Johnson. According to Riffel, to simulate a concurrent performance, the choir students recorded their parts for the song separately and their voices were meshed together in BandLab.

In a video accompanying the performance, each choir student shared information about an influential BIPOC singer. This performance, along with many others, is available to watch on their youtube channel, “Lincoln Choirs.”

According to Riffel, “Lift E’vry Voice and Sing” as well as their performance of the spiritual song “We Shall Overcome” were performed by the choir to show that they stand in solidarity with BIPOC individuals.

“In the light of everything that is going on in the world, I want students to know that their voices are important,” said Riffel. “There are so many ways to get involved and be a part of the movements that are happening all around, and these students have a talent and a desire to sing, so we can lift up voices and issues in that way.”

These performances are just one of the activities that Riffel has provided her students in an attempt to make her classes engaging.

“[In a typical choir online class] we warm up our voices, then we practice sight singing where students learn to read sheet music, then we work on our song with the program BandLab where we learn our harmonies, and then students get into small groups where they choose from a variety of projects to do, such as karaoke and singer-songwriter breakout sessions,” said Riffel.

According to Riffel, she has approached classes this way to provide opportunities for students to get to know each other better and build a community.

“Choir is an outlet for students, and instead of just sitting and working they get to stand up, move around, sing, build a community and they are creating these projects and performances that they can be proud of,” said Riffel.

Despite the challenges that have come from attempting an online approach to choir, Wilkinson is grateful that the opportunity to do choir at all is available.

“I am super grateful that there is still a way to connect with each other and make new friends, while still making music and being safe,” said Wilkinson.

“Choir is pretty fun, and more people should do it. It is not as scary as it sounds, especially in person,” said Olsen. “It’s great for people who like to sing to themselves, experienced musicians, or just anyone looking to try something new.”