TV shows being produced during COVID with added difficulty 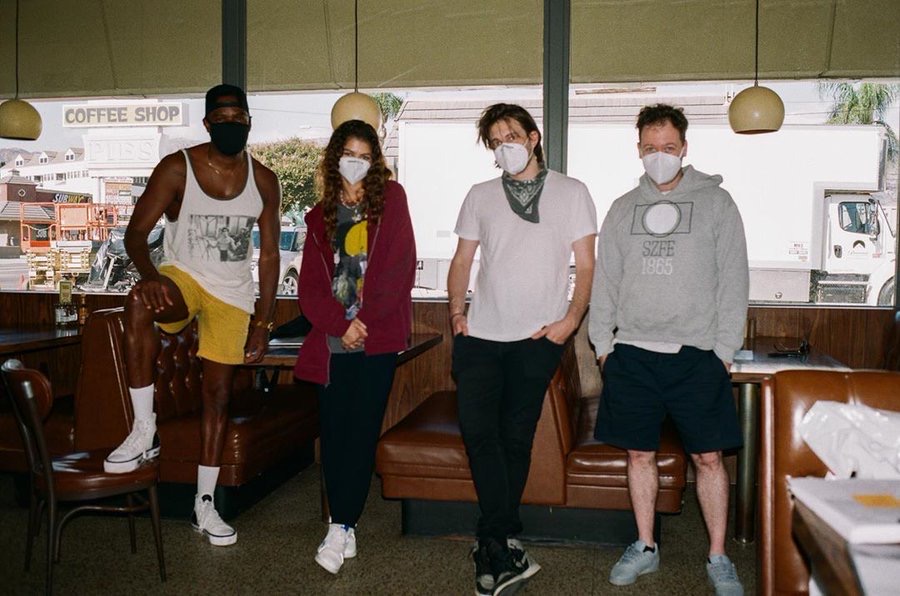 Cast and crew of Euphoria wear masks when off-set, while filming for special episodes.

Producing a TV show has always been a lot of work, but before COVID, worrying about causing an outbreak of a deadly virus while filming wasn’t a concern. Today, it is.

When COVID was declared a national emergency on March 13, everything paused. Most people were quarantined at home for weeks, even months. While stuck at home with not a lot to do, many of us rely on entertainment to occupy ourselves.

Since COVID paused the production of many shows, many people found themselves rewatching classics with plenty of seasons. Some began binge-watching shows that they might not bother watching during “normal times,” like the Netflix documentary Tiger King.

Tiger King is about Joe Exotic, a former zoo operator and tiger owner. The show gained a lot of attention at the beginning of quarantine, and was filled with many things that made people say “this can’t be real.”

Tiger King’s craziness distracted people from the virus that was keeping them inside their homes.

“I don’t really think that I would have watched Tiger King if I was not at home. The only reason why I watched it was because I had nothing to do and it was getting a lot of hype,” said sophomore Ava Rispler.

Many teenagers have used TV and social media to pass time during quarantine. After a couple of months of being stuck at home, however, some students started to run out of shows that fit their viewing standards.

“Sometimes I found myself watching shows that I didn’t actually enjoy,” said junior Ike Salinsky. Salinsky was convinced by a friend to watch H2O: Just Add Water, a show about three teenage girls who are secretly mermaids.

When we do find shows that we enjoy, it’s easy to become connected and binge-watch them. With limited access to the outside world, quarantine made this even easier.

“I found myself getting attached to a lot of reality TV shows,” said sophomore Ava Rispler. So far her favorite show to binge-watch has been Netflix reality TV show, Love is Blind.

After a few months of dealing with the virus, show production resumed again when California Governor Gavin Newsom announced Hollywood would reopen in mid-June. However, many restrictions and guidelines were put in place.

Different shows took different approaches in order to ensure that they would please their audiences while keeping the cast and crew healthy. Game shows and competitions like America’s Got Talent, Wheel of Fortune, and Jeopardy! found it fairly easy to follow social distancing guidelines.

Physical contact and intimate scenes are mainstays of dramas and soap operas. Amidst the pandemic, these types of shows have had to find ways to limit intimate contact and to social distance as much as possible.

Bold and Beautiful was the first American soap opera to resume filming after the shutdown. The cast and crew had to take creative approaches in order to follow guidelines and film quality TV drama. Each actor filmed their scenes individually, including kissing scenes. By using different camera angles and creative editing, on-screen, they look like any other scene. Executive producer of Bold and Beautiful Bradley Bell told Forbes that dolls that went unused prior to the pandemic would be used for intimate scenes. The show also used actors’ spouses and partners– who tested negative– for these scenes.

Producers may have found ways to work around filming intimate scenes, but shows that rely on a big cast and crew for filming are struggling.

In season one of HBO’s Euphoria, each episode consisted of many fast-moving scenes with lots of different people. Euphoria immediately became a hit among teenagers and was quickly renewed by HBO for a second season. The cast planned to begin script reading on March 16, but the pandemic forced them to postpone.

HBO decided to halt the production of the show until things return to normal. In the meantime, in order to give fans a little something until the second season premieres, HBO decided to premiere two special episodes.

The first special episode premiered on December 6. The episode was very different from any other episode of Euphoria, with only three scenes, mainly focusing on two characters.

Following the first special episode, the director of Euphoria, Sam Levinson, talked about how he was forced to upend the entire structure of the series and present the characters from an entirely different perspective. The second special episode is scheduled to premiere on January 24.

COVID has caused changes in all our lives. As TV production slowly continues to make a comeback, it can offer a sense of normalcy for many. It may take a long time for us to get back to normal, but having television could make tough times a bit easier.