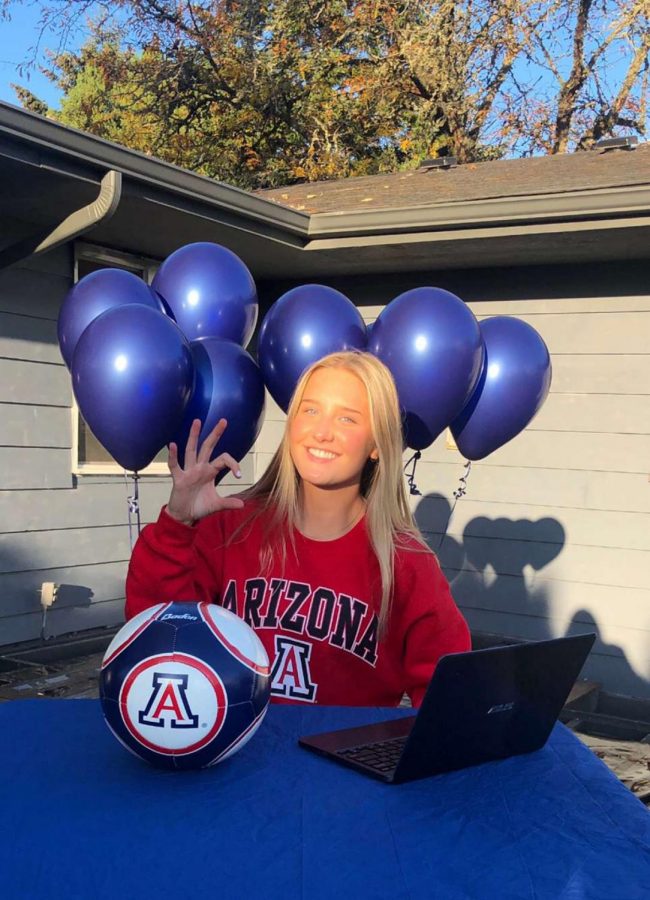 Jolie Maycumber committed to the University of Arizona to play soccer after she graduates.

On  August 30th, 2018, at Mike Walsh Field, in Portland, Oregon, the Lincoln Girls soccer team and the South Eugene Girls soccer team were all even with five seconds left. Jolie Maycumber, a Lincoln sophomore, stepped up towards the centerline, kicked the ball, and scored the winning goal as the time hit double zero. After losing the season opener to Jesuit, they win in style at home with a final score of 2-1 against South Eugene. This marks the first of five wins at Mike Walsh Field for the Lincoln Girls’ soccer team.

Maycumber is no rookie when it comes to a game of soccer. She started playing soccer at the age of four.

“My youth coach, who I had for about five years, made me more interested in soccer and a better player,” Maycumber said.

She has had many memorable games. One of which was against Jesuit.

“I assisted on the goal that made Lincoln the first and only team ever to score on Jesuit during that postseason.”

Besides soccer, she also has played basketball and softball throughout her school years, but she eventually had to give up both of them.

“I kind of stopped doing both of them… I gave up basketball because of soccer,” said Maycumber because, in the past, her soccer club and her basketball games/practices were at the same time . However, she said she might be able to do both basketball and softball along with soccer at Lincoln this year since all three sports have a different timeline due to Covid-19.

After high school, Maycumber will be taking her soccer talent to the University of Arizona, where she is already accepted. She has many goals for herself when she gets to college. Her main goal is to try to become a starter on the team, but if she doesn’t get the starting role she just wants to be a better player and help her team make it to the playoffs.

Maycumber has advice for younger players who have a passion for soccer.

“Try not to put pressure on yourself on messing it up or making any mistakes,” says Maycumber. “Literally just don’t overthink it because if you are trained for soccer, just rely on your training and just have fun; it’s literally just a game.”