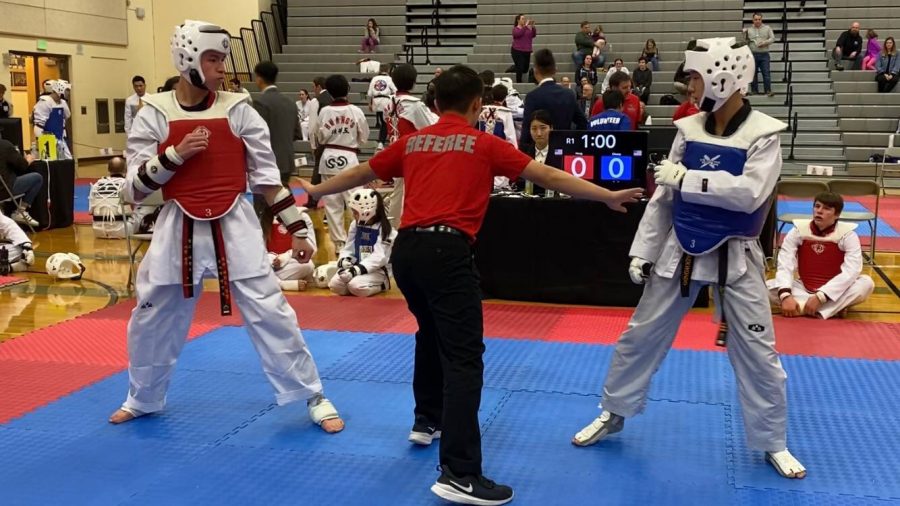 Sophomore TJ Bui competes in a competition before the COVID-19 pandemic.

CORRECTION: An earlier version of this article stated that Kylie Jones has practiced wushu for eight years. The correct number is 13 years. We apologize for the misinformation.

During COVID-19, martial arts studios have had to close their doors due to the pandemic. Some are now slowly reopening with heavy restrictions and guidelines in place to maintain the safety of everyone involved.

Senior Kylie Jones has practiced wushu, a contemporary form of Chinese martial arts, for 13 years. She and her team have only recently been getting back to in-person training.

“There have been a bunch of precautionary measures, like having our temperatures checked, [training in] small groups to allow distancing and regular cleaning of our equipment,” said senior Kylie Jones.

Jones has made the U.S. national team each year since 2014. She medaled in multiple world championships before winning two gold medals in the 2019 Kung Fu World Championships. Those gold medals were something Jones had been wanting for a long time.

“It was a big accomplishment for me… seeing my hard work pay off,” Jones said.

Jones saw all of her competitions and training come to a halt due to the pandemic. She and her team lost their entire 2020 season. The next World Championships are scheduled to be held in 2021, but now they are also in jeopardy due to COVID restrictions. As a senior, these cancellations and postponements have infused uncertainty into Jones’s last year with the team.

“We aren’t quite sure what’s going to happen, and that is definitely kind of frustrating,” she said.

Not only has the competition schedule shifted for Jones due to the pandemic, but her team’s dynamic has also changed drastically.

“The love language of our team was physical affection, so trying to stay away from everyone has been a little bit hard,” said Jones. “Especially with the little kids, who don’t really grasp why we have to stay six feet apart.”

That loss of team dynamics is something sophomore TJ Bui can also relate to. Bui practices taekwondo, a Korean art of self-defense, at a local studio and has also seen changes due to the pandemic.

“It’s just different. You can’t interact in the ways we are used to,” said Bui. “It’s always competitive, but you kind of lose that competition aspect right now.”

Bui, like Jones, has lost many opportunities for competitions.

“Right when COVID-19 shut everything down, my sister and I were supposed to go to a national tournament in Utah. But it just got completely canceled,” said Bui.

Due to his asthma, Bui has had an even slower reintroduction back to the studio. When he is in the studio, he feels completely safe due to the precautions taken. One of those precautions includes no sparring. Sparring is when a taekwondo student uses their skills against a live partner. Because of social distancing requirements, sparring has not been allowed in the studio.

“I hope we get to spar again soon. It is my favorite part of taekwondo, so it’s disappointing not to be able to do it,” said Bui.

Jones, on the other hand, has found her personal training not to be too heavily affected.

“Since wushu is pretty much an individualistic sport, I haven’t had to change too much in my personal training,” said Jones.

For Jones, like so many other athletes, these times have reminded her of her motivation to keep training hard for the future.

“[I will] at least hope that things get better,” said Jones. “And [I’ll] be prepared if it does.”

Although martial arts may look very different now than it used to, both athletes have found different ways to stay positive and keep a healthy mindset throughout the pandemic.

“I know things will get better eventually,” Bui said. “We just have to get through [these] hard times.”