Review: “The Social Dilemma” is the rude awakening many of us need 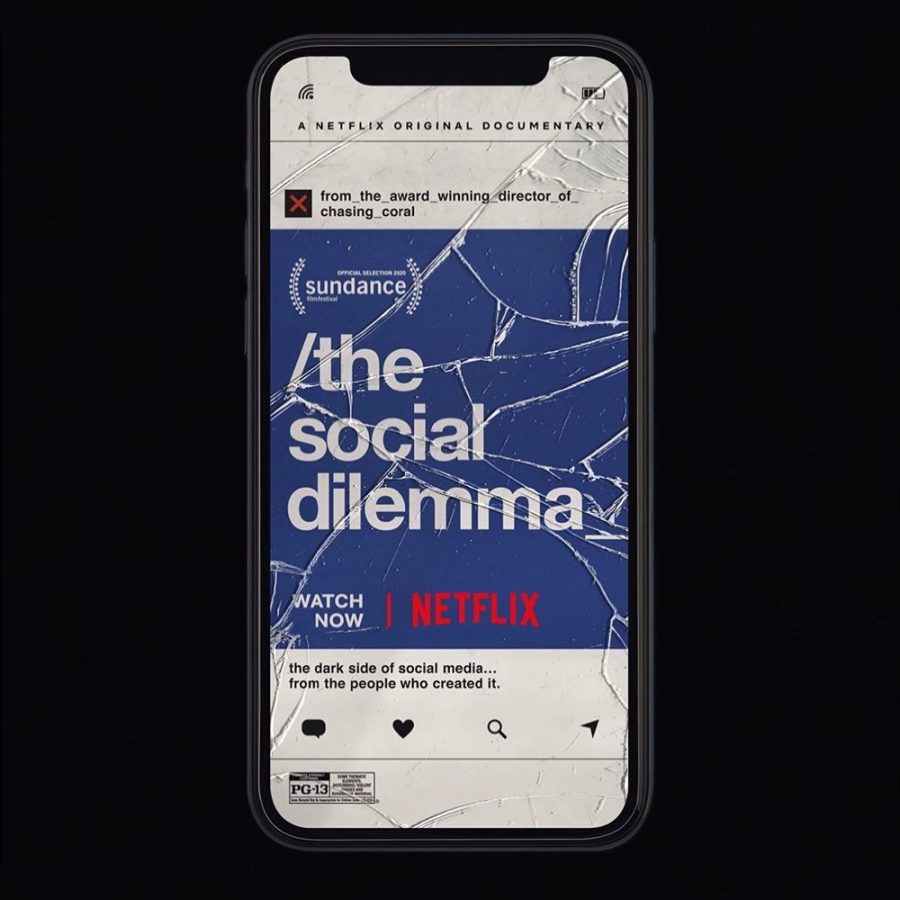 "The Social Dilemma," a new documentary this fall from Netflix, explores how social media has permeated our everyday lives.

The docudrama “The Social Dilemma” was released on Netflix on Sept. 9, 2020, and immediately garnered attention from teenagers and adults alike. The movie includes interviews about the harmful effects of social media with the very people who created the most popular social media apps. Having friends and family alike tell me that they immediately turned off all notifications after watching the movie, I was intrigued, to say the least.

While watching the movie, I had plenty of audible reactions to the statements that were being shared. Having the creators of the “like” button or the former executives of apps such as Facebook and Pinterest saying that they are scared of the future of technology is frightening. When initially creating these apps and features, the app developers said they never imagined their ideas would create such negative aspects in today’s society, one notable example being cyberbullying.

“The Social Dilemma” touches on the many negative aspects of social media. Phrases like cyberbullying, election fraud, and fake news are more commonplace than ever before because these apps have normalized them. Being part of the first generation to grow up with social media, these concepts never surprised me because that’s all I’ve ever known. I can barely remember a life without social media, so hearing the concerns of the former heads of apps like Pinterest and Facebook worried me.

One major issue that the movie brings to light is how social media affects our political climate. Many of the interviewees credit the enhanced political divide in our country to social media. It’s easier than it’s ever been to send an anonymous message to someone with whom you don’t agree.

Throughout the movie, documentary clips are integrated with scripted clips of a regular family, played by actors, dealing with the effects of social media. Although it is a dramatization, the scenarios are not far from reality. Each child of this family seems to be dealing with their own problems related to social media. The youngest daughter is cyberbullied after posting a picture on a social media app. The son is challenged to spend a week without his phone but can barely go five days when he receives an intriguing notification. The oldest daughter is trying to make sure her siblings are being safe while using these apps.

I had never seen a documentary in this format before but it was effective in getting the point across. The dramatized scenes are definitely over-emphasized scenarios. I don’t believe that some of the situations that were portrayed in the movie would realistically escalate in that short of time. However, the point that it is easy to get sucked into your phone that second you get a notification is valid. As shown in the movie, the son becomes so obsessed with social media it leads to him missing school, his extracurriculars, and more. The film succeeded in portraying the possible consequences of lives shaped by social media.

The scariest topic explored in the film was that of the manipulation behind social media. Social media apps depend on ad revenue. Although the concept of targeted ads is nothing extreme on the surface, we have reached a point where social media apps can predict what we want to see before we even think about it. Even though I may be following the same accounts as another person, social media feeds are so personalized that the same account will look completely different for two different people. Because ad revenue is the main source of profit for social media apps, high engagement is essential. If that means manipulating the truth of what you’re actually seeing, it’s a price they are happy to pay.

Additionally, notifications, which were initially created to just alert you when something happened, have turned into psychological manipulation. Often, we feel inclined to immediately check our phones when we hear the noise of a notification. Social media apps take this opportunity of your undivided attention to keep you on the app and encourage mindless scrolling. We think we are controlling our social media, but in reality, it’s controlling us.

“The Social Dilemma” is the rude awakening many of us need. It puts the dangers of social media into perspective and truly highlights the scary future that we are rapidly heading toward. I didn’t immediately delete all my social media after finishing the movie; however, I did turn off all my notifications. Whether or not you decide to turn off your notifications or completely delete your social media, this movie will leave you thinking.