Clearing the fog of confusion around Lincoln’s new campus 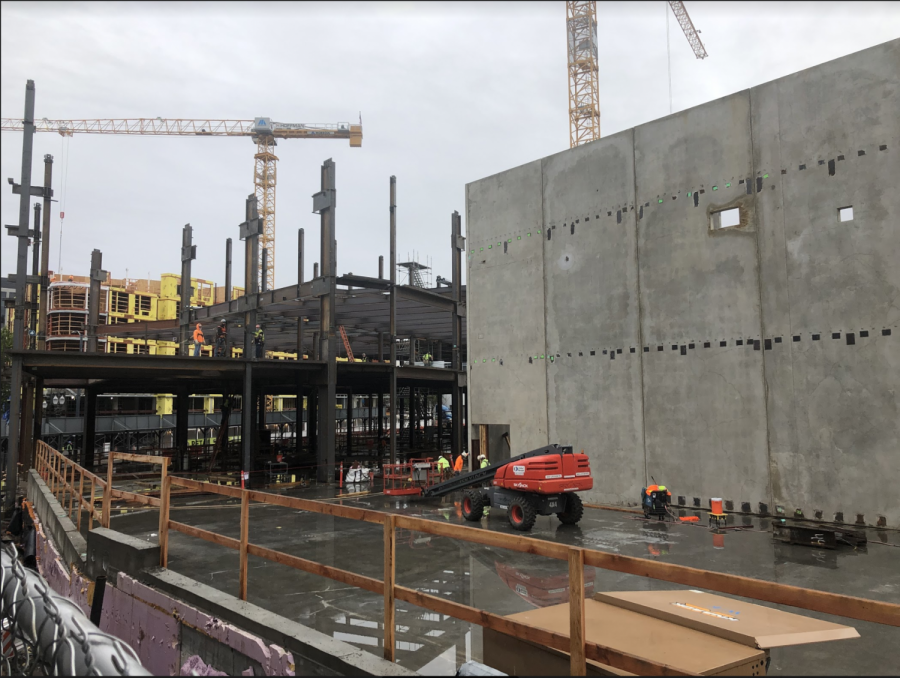 Views of Lincoln construction from October 12, 2020. Work has started on the outside frame of the school on the Jefferson St. side.

Before transferring to online school, any Lincoln student could look out the window and see construction. Now that it’s been almost seven months since students have been on-campus, the Cardinal Times reached out to administrators to ask how the new building is progressing.

“The project is still on schedule for the main building to be completed and open for the fall 2022 school year; and the track and field will then be open for the following year in 2023,”  Brida explains. “[The construction team] intentionally builds in what [they] call ‘schedule float,’ which is extra days here and there to try to manage those unforeseen things that happen like closing down the site or material delays.”

According to Principal Peyton Chapman and the construction team, the building will be 100,000 square feet larger than the current building. This allows for student resources like increased athletic space for student training, an entire floor dedicated to arts and science classrooms, more space and technological improvement for CTE classes like Culinary Arts and Robotics as well as increased access for people with physical disabilities.

Chapman is also very excited about adding “basic structural things” that will make a big difference for students.

“The mental health issues some of us notice and experience are exacerbated by the crowded hallways, the crowded classrooms, [or] the lack of natural light,” she says. “[Increased natural light] is so important for humans to be happy and productive.”

Sophomore Bailey Armstrong has concerns about the new school’s layout. She initially thought that the new building was going to be seven stories high.

“I’d be really worried about having to go up-and-down and up-and-down on stairs,” she says.

The plan for the new school says that the building will have six floors (not seven), and will include elevators students can use.

“The school is 100% ADA [Americans with Disabilities Act] compliant and will be accessible to all family members as well,” said Chapman. “[But the construction team] anticipate[s] that most students will prefer to use the stairs. Getting “steps in” has become an important health strategy in our culture.”

Another concern of Armstrong’s was school bathrooms.  She would like to have bathrooms that are easily located and accessible at the new school.

“It would be great for the new building to have more bathrooms so that during break I don’t have to spend all of [the] passing period in line for the bathroom and I can show up for my classes on time,” Armstrong says.

Chapman promised that a lack of bathrooms will not be a concern. However, multiple bathrooms does raise another problem.

“There are equal numbers of men’s and women’s bathrooms on each floor, plus gender-inclusive bathrooms, I believe, on every other floor,” she says. “[But] plumbing is very expensive and our six-story vertical school also poses unique challenges for the placement of things like bathrooms.”

Although not certain, the school’s plans look promising for future students, as well as the Portland community.

“We always wanted [the new campus] to be not just for Lincoln students but a resource for the community.  Because we’re located in the heart of the city… we could be a real resource for other schools or other school districts or nonprofit organizations [which] would really make [Lincoln] a relevant place for our city.”

If you want to find out more about the school building for yourself, you can get more details and construction updates here.