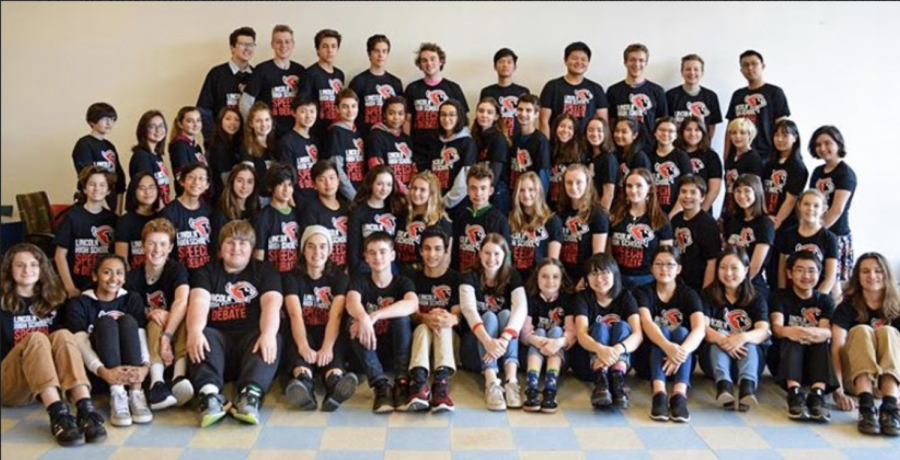 Lincoln’s speech and debate team has already had multiple competitions online. While there are mixed feelings about the online format, team members are glad to be able to compete.

Fall sports are postponed right now, but one of Lincoln’s teams has found a new way to adapt and still be able to compete.

Lincoln’s speech and debate team made their transition to an online competition style back in the spring of 2020, allowing for a smooth transition to their 2020-2021 season, according to senior Jiwon Lim, the team’s president.

“[The team] is still going to be really competitive this year despite being online,” said Lim.

“The meetings are done via Zoom or Google Meet, so debate rounds are held with two competitors or teams and their judge,” Lincoln coach Jeff Koegler said. “For speech events, most of the speeches are pre-recorded, so the judge will watch essentially pre-recorded pieces by the competitors and evaluate them that way.”

Despite being able to continue with the season, some of the debate team members think that this online approach takes some elements of speech and debate away.

“I definitely prefer physical tournaments and physical speech and debate. It gives a lot of room for personality persuasion and a lot of room for … [listening to] how your judge is reacting to your speech,” Lim said. “If you are doing your speech in live time, someone is absolutely going to have mic problems that are going to affect the debate, and if you are going to do a recorded version, you can’t cater to your audience, which is a huge part of speeches.”

“I have heard of some issues in the community with technological problems, crashes, failures, etc. We have been fortunate enough not to have experienced those problems yet, but they are out there,” Koegler said. “Most of the community is just playing it by ear right now to figure out what works best.”

“I think that part of what is fun about speech and debate is the camaraderie you get between both your opponents and also all of your friends on the team,” said Bingham. “A lot of the community aspect has been taken out of speech and debate.

Though Bingham and Lim prefer debating in-person, they are both thankful that they can continue competing in the midst of the coronavirus pandemic.

“It is certainly great that I still can do speech and debate online because I know that a lot of other extracurriculars have been cancelled,” Bingham said.

Lim points out that there are some upsides to a virtual format, one of those being accessibility.

“I think being online gives a lot of opportunities for people who can’t come to certain tournaments because of certain circumstances,” she said.

“It’s… nice with online tournaments that you have to dedicate a lot less time [to] because you don’t have to travel to them,” Bingham said.

Regardless of the online format, Bingham is optimistic for the year ahead.

“We have two new coaches this year who are really great,” she said. “This is a really great year to try out speech and debate.”