The Cardinal Times • May 19, 2020 • https://cardinaltimes.org/15697/news/coronavirus-sends-exchange-students-at-lincoln-back-home/ 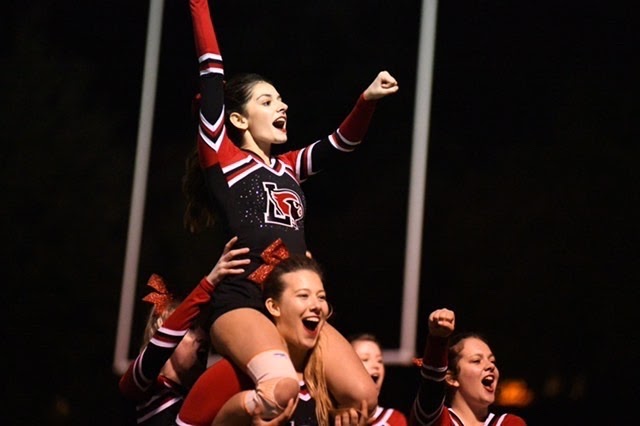 Sofia Colombo (flyer) and Giovanna Mendelli (base) cheering at a Lincoln football game in fall 2019. Colombo and Mendelli were two Italian exchange students who were sent home due to the coronavirus.

COVID-19 brought an unexpected end to the experiences of foreign exchange students studying abroad at Lincoln.

Ten international students from Austria, Germany, Spain, Italy, Australia, Mexico and Denmark attended Lincoln this year. In March, the students learned they would have to return home due to the coronavirus. The pandemic has been scary for all, but for students who were far from their families, it was particularly alarming. Because of the uncertainty surrounding international travel, the students were sent back before they got stuck in the U.S.

“We were so sad to see our foreign exchange (FEX) students’ experiences disrupted by the COVID school closures,” said Lincoln Principal Peyton Chapman. “We partner with several exchange programs including AFS and Ergon (Italian students), and as a school we simply supported the decisions that each program made regarding their students.”

Senior Sofia Colombo was one of the exchange students who had to return home. Colombo is from Latina, Italy, a city near Rome, and chose to spend this year at Lincoln. Unfortunately, Italy was one of the countries that was hit hardest by the virus.

”I found out that I had to leave the USA on Mar. 20. I was really sad when my program told me I had to leave,” Colombo explained.

Attending Lincoln gave her the opportunity to try a number of new activities that were not offered at her school back home. Both classes and extracurricular activities provided unique experiences.

“My favorite class was ceramics because it’s something I’ve never done before,” she said.

“Cheerleading was definitely the most amazing thing I did in the USA,” said Colombo.

Colombo was a dedicated team member and became a flyer on the cheer team. As a flyer, she worked on stunts and was lifted by her team members. She made many new friends on the team but, unfortunately, when the outbreak struck, Colombo and her fellow exchange students were forced to return home.

The departure was sudden. Colombo left Portland on Mar. 28.

“At the airport and on the plane, I had to wear a mask. When I got home, I had to go into quarantine in my room for two weeks,” she said.

March was a time of great uncertainty in Italy. Italy had a strict nationwide quarantine imposed on Mar. 9. Fortunately, seven weeks later, things are beginning to look up for the country. As of May 4, Italy began reopening.

“[Italy] is doing better with the COVID-19 outbreak. We have less cases now. It’s so strange to be back, but now I go out with my friends so it’s better,” said Colombo.

Colombo and her family are doing well but Colombo misses her host family, friends and classes now that she is back home.

Despite the setback of the pandemic, Lincoln is still dedicated to encouraging foreign exchange students to attend Lincoln.

“It was all very abrupt this year, particularly for those who had hoped to participate in Lincoln’s graduation ceremony,” said Ms. Chapman. “Connecting with students around the world helps us grow as global thinkers and better understand cultural differences.”