The Cardinal Times • May 22, 2020 • https://cardinaltimes.org/15691/news/coronavirus-hits-black-and-brown-communities-hardest/ 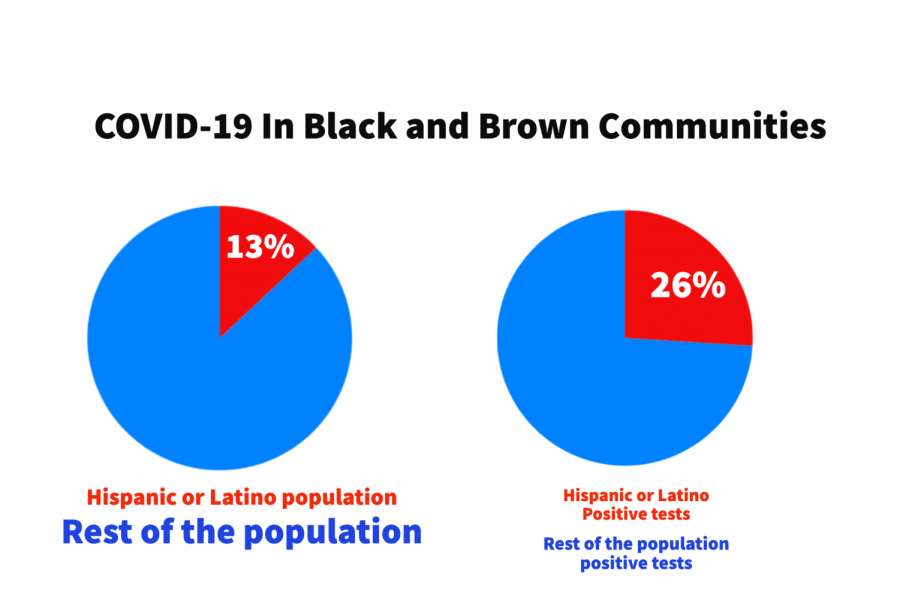 The coronavirus has disproportionally affected black and brown communities in Oregon and the rest of the country.

Throughout the United States, black and brown Americans are at a much higher risk of being affected by COVID-19 than others. This overrepresentation is due to underlying medical issues, less access to health care, and a higher likelihood of working unstable jobs. According to the Oregonian and other sources, the Latino community is being hit the hardest in Oregon.

Many front-line staff such as, who are showing up to their jobs in person every single day, are Latino.

Alex Dolle, who works at the Portland’s Emergency Coordination Center (ECC), explained the statistics and reasons behind them.

“Using the Oregon Health Authority’s daily situation status report for the day of April 21st, and referencing that to the US Census Bureau’s fact sheet on Oregon, we can take a look at the numbers. The Census Bureau estimates that 13.3 percent of those in Oregon are Hispanic or Latino/a. If we compare that to the cases by race and ethnicity, the Hispanic group accounts for 26 percent of positive tests in Oregon,” said Dolle. “There are a couple factors that could possibly be responsible for this, but it’s one overarching idea. Those of this ethnicity are often those who have been disadvantaged in the past. This means that they may have less access to healthcare, they’re more likely to live in congregate settings, and they’re more likely to work essential jobs like long term care living assistants, retail employees, and other ‘front line’ positions. All of this and some other factors culminate to result in this disproportionate infection rate.”

Sophomore Sofia Crespo, a member of MEChA, shared her thoughts and feelings regarding the crisis.

“I feel that the effect COVID-19 has on black and brown communities is very telling about the deeply ingrained racism in capitalism, built for the white man by the white man. Brown communities are suffering at a much higher rate than white people both nationally and specifically in Oregon, with Latinas being only 13 percent of the Oregon population but accounting for 30 percent of the COVID-19 cases,” she says. “Both health and economic disparities between brown and white folks play a big role here with people of color having less access to healthcare.”

Crespo linked the COVID-19 crisis to institutional racism and the problems of capitalism.

“[It’s] becoming much more apparent because COVID-19 is accentuating the issues within our capitalist society. All of the laws and policies made have been building on each other causing this pandemic crisis to kill black and brown folks. It creates this indirect genocide, essentially.”